In 2016 when the economy looked like it could fall into a recession, the leading central bankers met and coordinated a massive stimulus effort. Since then the ECB has been on a massive buying binge. From April 2016 to March 2017, the ECB purchased 80 billion euros worth of corporate and government debt per month. From April 2017 to December 2017, the ECB purchased 60 billion euros worth of bonds per month. In the first 9 months of 2018, the ECB will buy 30 billion euros worth of bonds per month. The program is expected to end a few months afterwards. The ECB’s policy changes over the next 12 months are why the global central bank QE is expected to slow down substantially in 2018 and their collective balance sheets are expected to shrink in 2019. Central bank skeptics are interested to see how this tapering along with the unwind of the Fed’s balance sheet affects stocks and junk bonds since both have risen since this accelerated QE started.

The chart on the left reviews the recent past of ECB bond buying which we just discussed.

The two alternatives shown in the striped bars are possible ways the program is finally ended in its last 3 months. This looks at the tapering proportion between government bond buying and corporate bond buying. Either way, the bond buying is expected to end unless there’s a negative change in the economy. The chart on the right shows why this tapering has a catch. It shows the amount of reinvestment bond buying from the maturing bonds in PSPP that will occur in the next few years. 2017 didn’t have much expiring government bonds, but in 2018, which is when the bond buying is supposed to be cut in half, there are over 100 billion euros in maturing bonds which will be purchased. In the next 3 years afterwards about 200 billion in bonds will be purchased each year. Even though the economic expansion has been going for a few years, the ECB still has this hyper stimulative policy in place.

Italy Is Vulnerable In 2018

One of the interesting parts of the tapering catch is that the bonds reinvested need to be from the same country they mature from. As you can see from the chart below, the French and Italian bonds have been purchased more than their capital key allowance. The capital key is how many bonds the ECB is allowed to purchase from each country.

The German and Portugal bonds are purchased less than the capital key says. While the ECB hasn’t followed along with the capital key rules exactly, it won’t be able to help Italy when the bonds they buy need to be of the same kind as the expiring ones.

To make matters worse for Italy, its reinvestment rate is very low in 2018. The table below is Goldman Sachs’ estimates for the ECB’s reinvestment program.

The column to focus on is the one on the right. It shows the percentages of gross purchases including reinvestments. 2018 will have a higher amount of reinvestments. There will be about 300 billion euros in new purchases and about 100 billion in reinvestments. As you can see, only 19% of gross purchases of Italian bonds will be reinvestments, meaning Italy will be particularly vulnerable to what the free market decides its bonds should yield. It’s important to note that the ECB wasn’t making up for reinvestment dispersion in its 2017 buying of Italian bonds because Portugal had a lower percentage of reinvested bonds, yet it was underinvested in versus the capital key. The ECB sees that Italy needs to be supported.

The ECB bond buying has led the Italian 10 year bond to have a 1.84% yield which is about 50 basis points lower than the US 10 year treasury yield. Given the weakness in the Italian banking system and the (small) possibility of it leaving the European Union, you would expect the bonds to have an interest rate premium. There will be an election in March 2018 which will cause volatility in Italian bonds that the ECB will have less capability to suppress. One of the economic problems Italy is grappling with is the fact that youth unemployment is higher in the south than the rest of the country. Areas like Sicily are more likely to support extreme left or right political parties because of the economic strife they are experiencing.

As we mentioned, the Italian government bonds are about be more affected by the free market than in the past couple of years. This will probably cause yields to increase based on the systemic and cyclical risks mentioned. The chart below shows how stark the situation is. 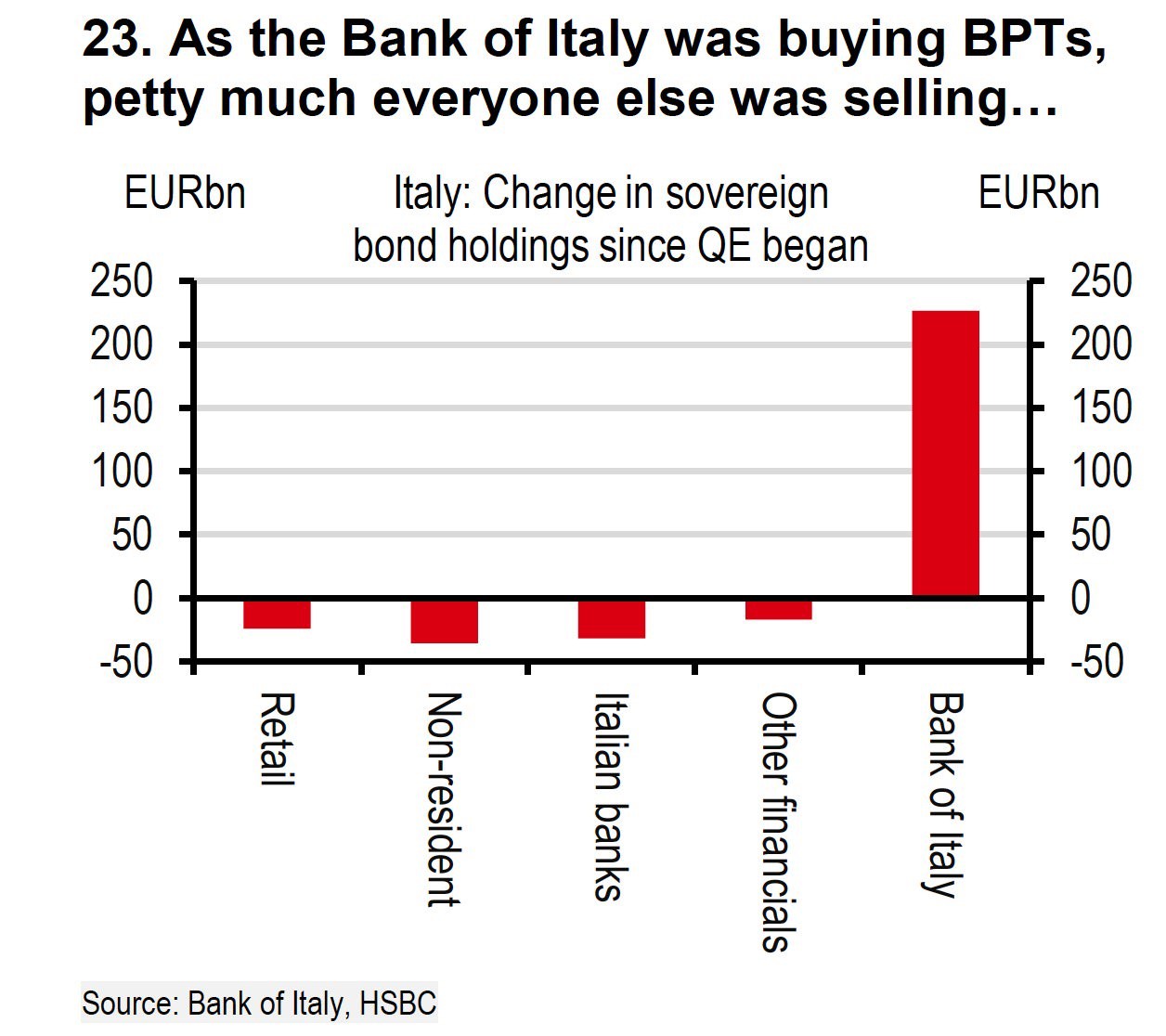 Bank Of Italy- The Only Buyer Of Italian Bonds

The chart above shows the net purchases of Italian government bonds by various entities since QE was started by the ECB. Keep in mind, the Bank of Italy is one of the banks within the ECB system of banks. As you can see, the retail, non-resident, Italian banks, and other financials have been net sellers of Italian bonds. Only the Bank of Italy has been buying. The free market will be a crude awakening if Mario Draghi ever allows it to influence prices. The ECB is expected to meet its bond buying limit in 2018 which is $2.5 trillion. This means Draghi might have to stand and watch this situation unravel. Will the ‘whatever it takes mantra’ continue if Italy struggles or will Draghi be hamstrung by the rules? That’s the question that will be answered in the next few years.

Reviewing a few more details of how bad the situation is in Italy, the chart below shows the inflows of foreign direct investment as a percentage of GDP from 2010 to 2016. As you can see, Italy is in worse shape than Greece. 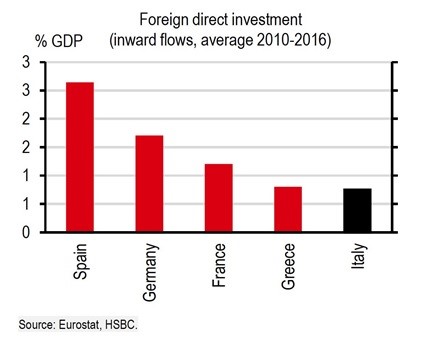 The chart below explains one of the reasons why the foreign direct investment has been low in Italy. Italy has the highest share of capital sunk in zombie firms as of 2013. A zombie firm is a firm that’s over 10 years old and has an interest coverage ratio of below 1 for 3 straight years. There is almost 20% of capital and labor sunk into these technically bankrupt firms in Italy. The ECB helps to prop them up with its bond buying. Higher interest rates will cause them to collapse which would be like ripping a band aid off. It’s great to get rid of the zombies in the long term, but the short term would be a disaster as the job losses would be high. 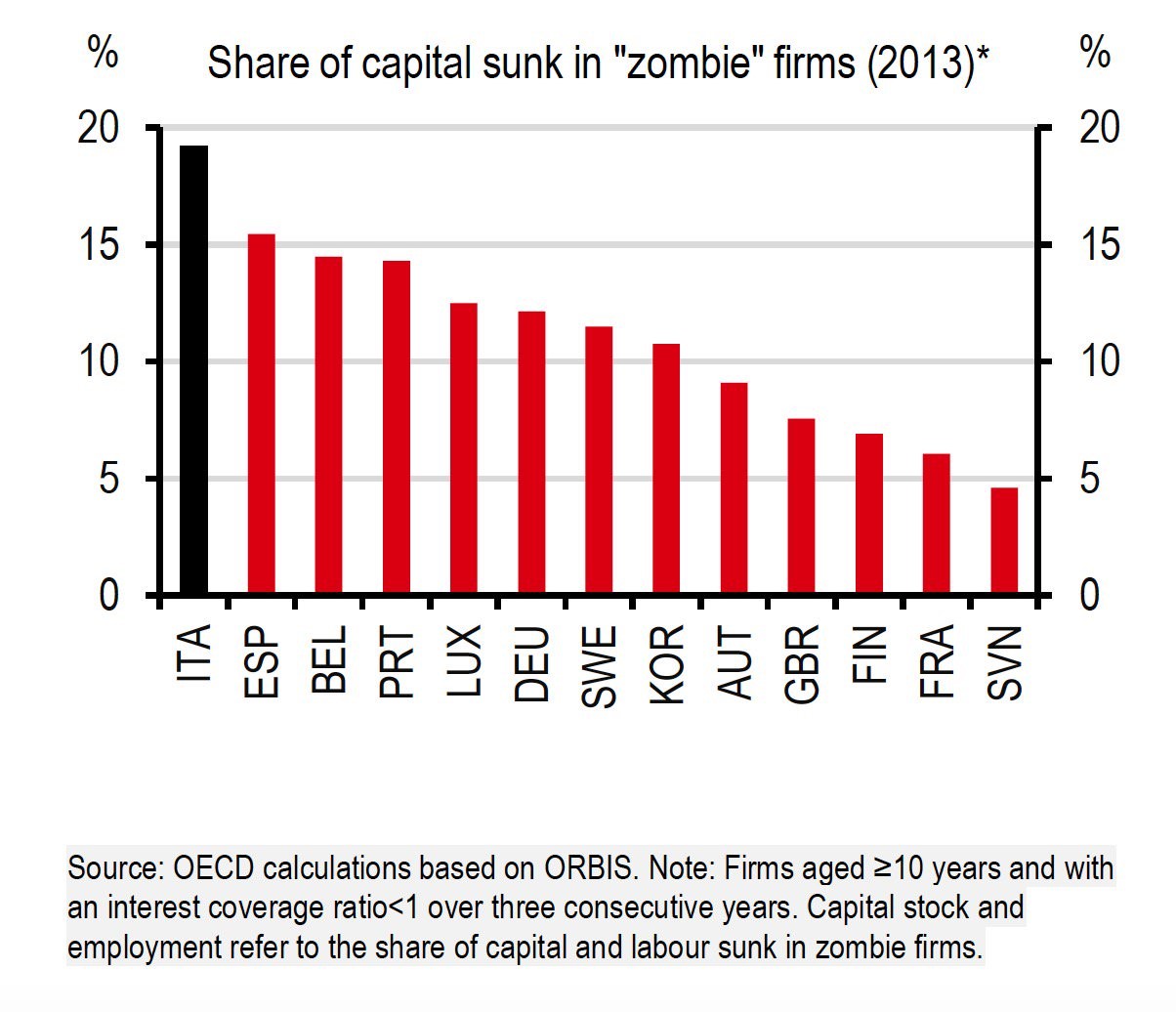 Zombies Are Prevalent In Italy

The goal of this article was to explain the potential strife Italy will face when the ECB tapers its bond buying. The country won’t be saved by the reinvested bond buying as not many of its bonds mature in 2018. Zombie companies might need to face the free market in deciding bond yields, potentially hurting the Italian economy even further which has been weak for the past few years even as the E.U. has recovered, adding an additional catalyst to entice Italians to want to leave the E.U. The potential for increased risk in volatility of asset prices in the EU, stemming from the imbalances posed by Italy, could have significant repercussions for investors in 2018.