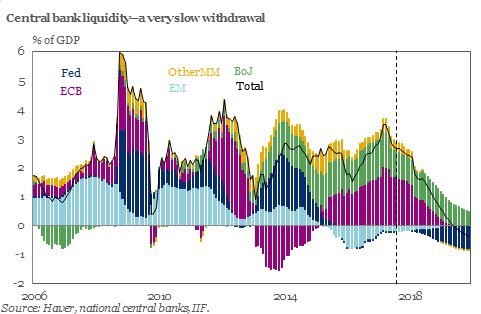 The biggest story in the financial markets in the next 12 months is the shift in global monetary policy away from being accommodative as central bankers taper and, in the Fed’s case, shrink their balance sheet. The chart below shows an estimate of central bank liquidity as a percentage of GDP.

There have been various mini-panics during this economic recovery whenever central bank added liquidity slows. In the next 18 months, the growth will slow until it becomes negative in 2019. The fact that stimulus needed to be pumped into this economy the entire recovery gives credence to the argument that this has been a artificially induced recovery, something that is not indefinite. Even though the Fed calls quantitative easing stimulus, St. Louis Fed Vice President Stephen Williamson said:

“There is no work, to my knowledge, that establishes a link from QE to the ultimate goals of the Fed—inflation and real economic activity.”

You might be wondering why central banks are going through with this if these negative consequences will result. One reason is because if the central banks said there was QE infinity coming, the marketplace would break. Speculators are currently putting money in low yielding European corporate bonds as well as U.S. stocks to front-run monetary policy. If unlimited global QE was announced, the speculation would increase and be permanent. The Fed is worried about the lack of volatility in the stock market. A perennially increasing stock market isn’t as great as it sounds. Tech stocks increased for years in the 1990s which led to a big crash. Manipulating the length of the business cycle through artificially induced booms, create drastically prolonged busts – neither of which is good for the economy in the long-run. Nothing moves in a straight line forever up or down. Venezuela’s stock market is up exponentially because of inflation, at the expense of the currency’s purchasing power. The stock market should fluctuate in a healthy capital market. The more corrections there are, the healthier it is in the long-run for markets.

As you can see from the chart below, global equities increased and the Goldman Sachs Financial Conditions index decreased (loosened) when global QE was injected into the market. 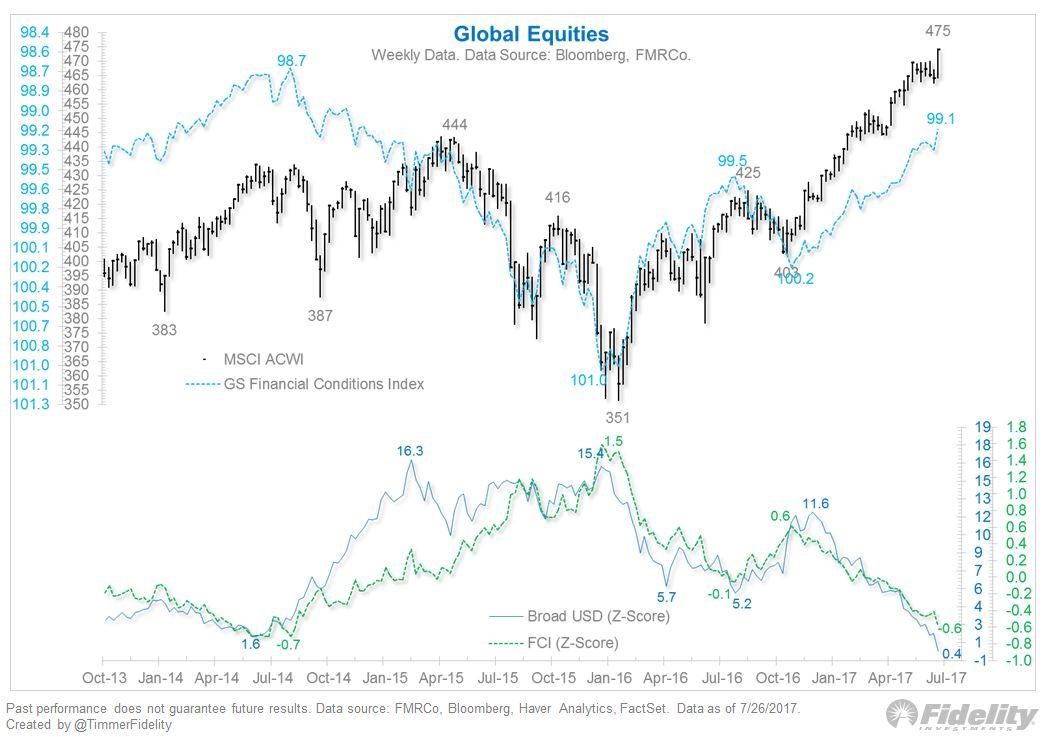 The chart above shows when QE is injected in the market, financial conditions loosened and the dollar sold off. The dollar is a flight to safety trade which is why it gets bought in times of strife like 2016. This isn’t to say the dollar will necessarily rise in 2018 when global tapering begins. The dollar might weaken because President Trump is pushing for a weaker dollar to help exports. Secondly, the ECB is tapering more than the Fed is unwinding its balance sheet. That would make the euro increase versus the dollar. Specifically, the Fed will start with $10 billion per month in the unwind and eventually ratchet it up to $50 billion per month. The ECB currently does 60 billion euros in bond buying per month. It is expected to do 20 billion euros of tapering in the beginning of 2018. The expectation is for the ECB to end the buying program later in 2018. That’s 60 billion euros versus only $50 billion in the Fed’s unwind. 60 billion euros is equivalent to $70.51 billion.

Another reason why the ECB wants to taper is its bond buying program is keeping zombie companies alive as we have detailed at length here. Zombie companies are firms with bad businesses who are only being kept afloat by low interest rates. The problem with this is capitalism works through creative destruction, by providing consumers with the best value at the lowest price. If uncompetitive firms are kept alive through financial engineering, this hurts consumers and the labor force as productivity growth falls to a standstill. The chart below defines a zombie European firm as one with an interest coverage ratio of lower than 1 times. The interest coverage ratio is the amount companies can pay their interest on their debt with their earnings. A firm is considered in trouble if the ratio is below 1.5 times. Below 1 time means bankruptcy is near. 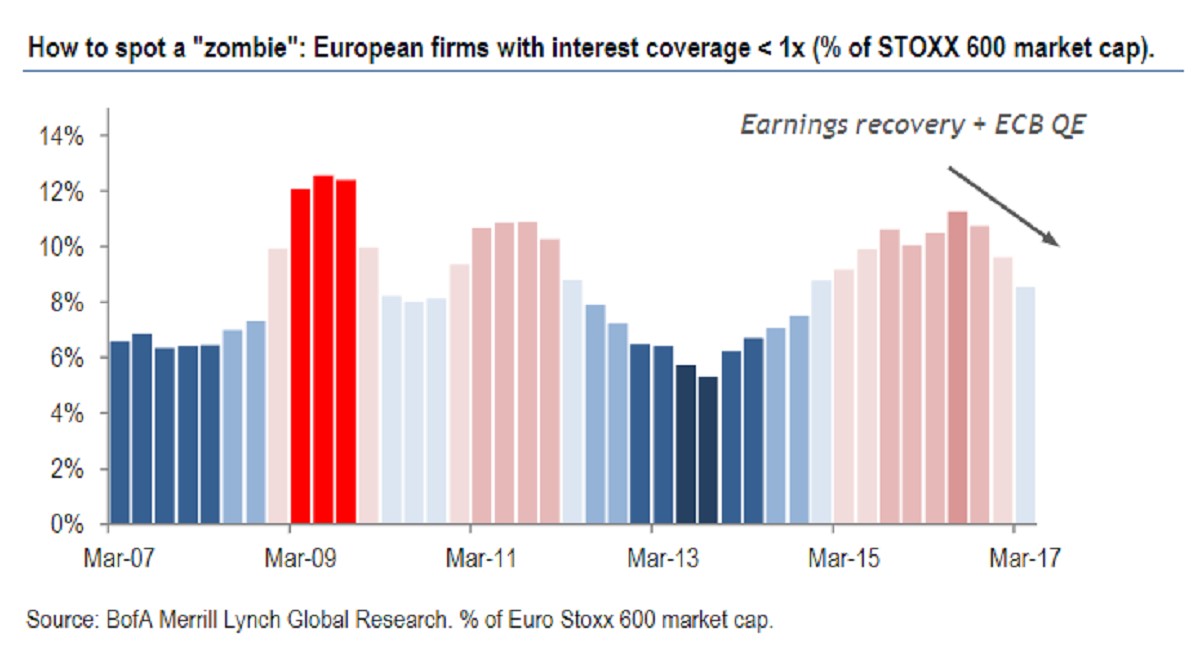 The chart is the market cap of these zombie firms in the STOXX index as a percentage of the whole STOXX 600 market cap. As you can see, the latest ECB stimulus has pushed some firms out of the zombie category. However, this is an artificial improvement. These zombie companies still mostly have bad businesses with terrible balance sheets. They are being helped by the low corporate bond yields. The real number of zombie firms which are hurting productivity growth is much higher than is being shown. There will be a large increase in the number of zombie firms when the ECB tapers; there will be also a huge round of bankruptcies as interest rates increase.

The Fed doing an unwind wouldn’t necessarily be cause for concern for the financial markets as its expected to maintain an over $2 trillion balance sheet when it’s done. The problem is no other central bank is picking up the slack. In fact, they are tapering along with the Fed which will likely cause financial conditions to tighten and the stock market to crater. The worst effect will be in Europe as the central bank will stop buying corporate bonds which will cause many zombie companies to go bust. This is healthy for the long-term economy because bankruptcy allows new firms to develop. However, there will be severe near-term pain because there is a pent-up amount of weak firms that need to go bankrupt.