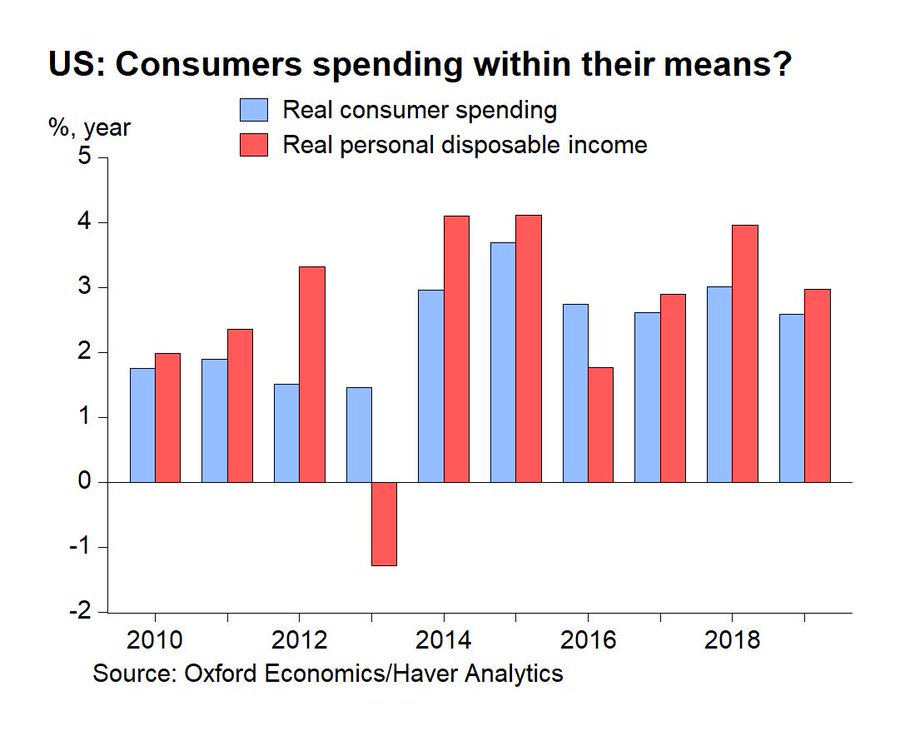 Year over year Q4 GDP growth was 2.3% and quarter over growth was 2.1% which met estimates. The St. Louis Fed Nowcast was the most accurate Nowcast as it was perfect. There weren’t many surprises in this report as it was consistent with previous reports during the quarter. Full year GDP growth was 2.3% in 2019 which was down from 2.9% as the boost from the tax cut waned and the economy had a cyclical slowdown.

Real consumer spending growth fell from 3.2% to 1.8% which missed estimates by a tenth. Unlike the last 2 quarters which had over 70% of growth driven by consumption, Q4 had less than 40% driven by consumption as you can see from the chart below. The driving force for economic growth excluding trade, inventory, and government spending went away, so the bottom fell out. This was a weak report. Final sales to private domestic purchasers growth fell from 2.3% to 1.4% which was the weakest growth in the past 4 years.

Consumption added 1.2 points to GDP growth (spending on services boosted growth by 0.9%). Full year PCE growth was 2.6%. In Q4, real disposable income growth was 1.5% which fell from 2.9% in Q3. Full year income growth was 3% which fell from 4%. The savings rate in Q4 was 7.7% which was down from 7.9%. It’s still relatively high. The GDP price index was up 1.4% which fell from 1.8% growth and missed estimates for 2%. For the quarter, headline PCE inflation was up 0.1% to 1.5% and core PCE inflation fell 0.1% to 1.6%. This supports the Fed’s stance of worrying about inflation being too low rather than worrying about it being too high. Therefore, a rate cut is more likely than a rate hike in 2020.

This report was weak because trade helped growth a bit more than inventory investment hurt it. (Plus, government spending was strong). Those were both one-time factors, which combined to push GDP growth about 0.4% higher (1.5%-1.1%=0.4%). More than 70% of GDP growth came from net trade as it helped growth by 1.5%. Imports fell 8.7% and exports rose 1.4%. That’s the perfect combination to help GDP growth, but doesn’t mean the economy was healthy. The decline in imports was partially because of the trade war with China. Goods imports fell 11.6% which was the worst decline since 2009. With Phase 1 of the trade deal in place (despite not so glamorous details), imports will likely increase (ignoring the coronavirus’ impact).

As the chart below shows, growth was hurt by the depletion of inventories.

Gross private domestic investment fell 6.1%. Non-residential fixed investment fell 1.5%, but that was an improvement from Q3’s 2.3% decline. Spending on structures and equipment fell 10.1% and 2.9%. Spending on durable goods was up 1.2% and spending on non-durable goods rose 0.8% which was the lowest growth since Q1 2018. Boeing’s 737 Max delay hurt business investment. That impact could end in mid-2020, but the plane’s return keeps being pushed back.

As you can see from the chart below, this type of government spending growth usually occurs at the end of recessions when the unemployment rate is high and the government is trying to stimulate growth, but this time it’s about increased spending on defense.

The trade deficit is falling, but the budget deficit is rising due to increased spending. The budget deficit in 2019 was $1.02 trillion which increased 17.1% from 2018 (which had 28.2% growth itself). There is a politically charged debate about whether the tax cuts helped or hurt the deficit. That answer depends on how much you think the plan helped GDP growth. It might not have helped a lot given the weak GDP growth in 2019.

GDP growth of 2.1% sounds okay, but real final sales to domestic purchasers growth which excludes trade, inventory investment, and government spending was the lowest in 4 years. Consumer spending growth weakened. The trade deficit has fallen, but the budget deficit is widening. The homeownership rate is increasing as young people and those who make below the median wage are starting to own homes at a higher rate.