Should The Top 4 Tech Firms Be Broken Up? 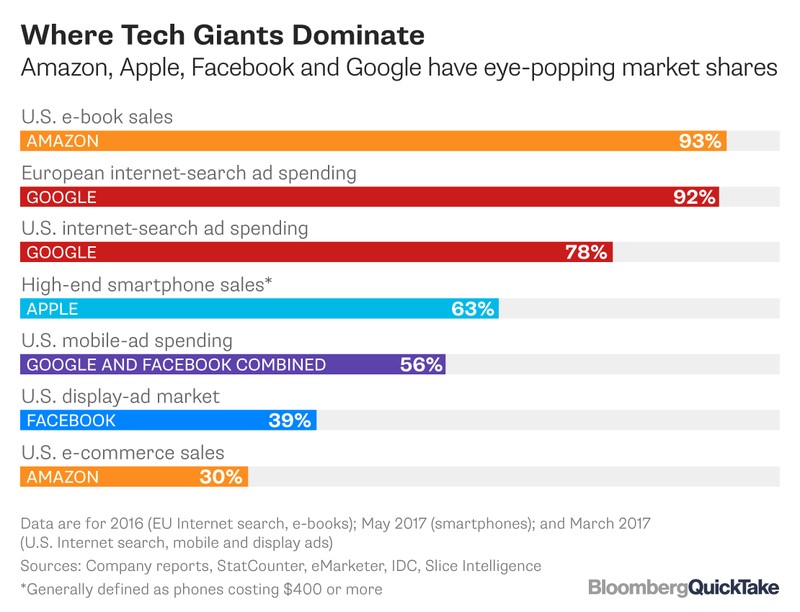 The top 4 tech firms, which are Apple, Facebook, Amazon, and Alphabet, are being attacked by some commentators because they have become ‘too powerful.’ With a similar mindset to how Teddy Roosevelt chose to break up the trusts because they garnered too much influence over the market, these commentators believe these tech firms have gotten so big that they eliminate competition. The one correct point these critics make is that these large firms have a high market share in their respective industries.

As you can see in the chart below, Amazon dominates e-book sales as it has destroyed the other book sellers.

Barnes & Noble’s Nook didn’t do as well as Amazon’s Kindle, so Amazon won the e-reader battle. It would hurt consumers if Barnes & Noble was subsidized to make better e-readers. Taking money from the innovators at Amazon and giving it to Barnes & Noble is operating a backwards looking economy. That is an example of corporate welfare many critics of socialism despise.

As you can see, socialists criticize crony capitalism or corporatism more than capitalism itself. The best example of this is how socialists complain about the influence big firms have over the government. If there wasn’t a powerful government to manipulate, then the corporations wouldn’t hire so many lobbyists to influence policy. Big companies love regulations because it helps them control the marketplace. It’s easier for a big company to hire lawyers to parse through the rules, while small companies give up.

Amazon also dominates e-commerce sales. That’s because it invested in creating a great logistics network. It also pays close attention to making sure ratings on products are valid such as having a label that verifies that the reviewer purchased the product as well as the ability to say if you liked or disliked a review. Prime is also a great deal as customers get free 2 day shipping as well as other media perks like music and movies. There is now more competition because of the growth in online retail. In the past, people were limited to buying merchandise at the stores in their neighborhood. These retailers had monopolies on the products they sold in their area. Now that Amazon has the same products at lower prices, consumers are switching to it because those retailers were monopolies who didn’t invest to improve the customer’s experience. The customers have also spoken with their wallet that they like Amazon over eBay which still has a bidding system for many products. Once again, if the government subsidized the weaker company, the consumer would be hurt. Amazon has also forced Wal-Mart to invest in its online infrastructure. The recent Jet.com acquisition made by Wal-Mart helps consumers buy goods for lower prices.

One of the arguments those clamoring for destructive regulations make is that European countries don’t benefit as much as the US from the jobs that are created by the tech firms. This is a myopic viewpoint as Google provides a one stop shop for any small business in Europe to advertise to a huge userbase. Advertisers have decided they like Facebook over Twitter and Snapchat because it has a huge audience and better analytics and ways to customize audience targeting. Saying Google has too many users is criticizing what customers of the company love. The point is the product these firms offer is the main benefit they provide. Google has destroyed the competition in the online ad market because it provides a great product. While it has hurt jobs in that industry by winning in the zero sum game for market share, the company helps many small businesses acquire customers, supporting competition.

The chart below shows another example of illogical thinking when it comes to these top companies.

Facebook and Google control a larger percentage of the ad market than newspapers and a percentage that is increasingly rivaling TV. In fact, Facebook has live TV content on its website and Google has YouTube TV. This situation is like the retail space in that the TV, radio, and newspaper firms had monopolies in their jurisdictions before the internet. While the local newspaper in an area didn’t have a large market share when you looked at the national total, it had a big market share in the area it was distributed. There was a limited place to get information. Google and Facebook allow almost any company to have content on their websites, far from the anti-competitive tactics critics claim they have.

These companies all empower small businesses. YouTube allows content creators to create their own shows for free, opening their videos to an audience of billions of people. Amazon let’s firms sell products on its website and empowers businesses through its cloud platform. If the cloud product wasn’t great, it wouldn’t have such a high market share. Facebook allows public personas to reach their fans. The company we haven’t mentioned yet, Apple, empowers developers to make apps for their devices. Apple has paid out $70 billion to developers as of June 2017. All these firms have a stranglehold on their platforms, but they only are successful by empowering others.

The worst argument we’ve heard on this topic of breaking up the top tech firms is that Amazon stifles the competition by not focusing on earning profits. Yes, you read that right. Critics are mad Amazon doesn’t earn enough profits. Usually socialists are mad that companies earn too many profits, so this is a new one. Amazon investing in new businesses helps the company innovate which is great for mankind. Amazon not working for short term profits is the exact model critics of capitalism want, yet they are still unhappy. If Amazon was forced to fail by regulators, it might be replaced with the short termist companies critics of capitalism hate.

The famous court case McCullough Vs. Maryland stated, “That the power to tax involves the power to destroy; that the power to destroy may defeat and render useless the power to create.” The destruction that the regulators create in the aim of helping people would cause harm to the customers of these firms. The problem the big firms have is media related. When a story about how they didn’t serve customers properly is reported, it gains more traction because they are large companies. Small companies deliver poor service all the time, but aren’t targeted because fewer people care.

If you are concerned about monopolies, perhaps you should ask why Federal Reserve Notes, commonly known as the US Dollar, a currency issued by a private company, is legal tender in the US and the only currency officially permitted for us?