Consumer Spending: Is US At Risk Of Recession? 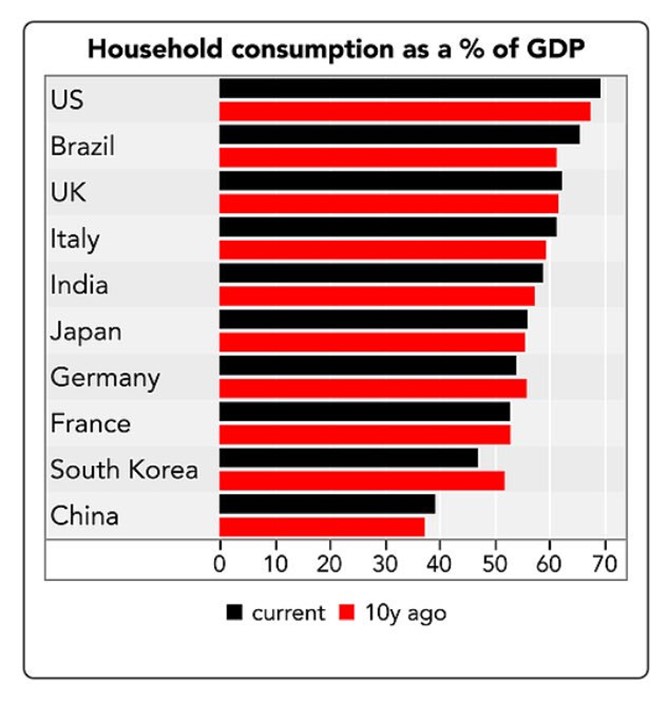 In this article we will look at some of the trends in consumer spending which is the most important part of GDP growth. Previously we reviewed whether the average US consumer is healthy or not. The biggest worry long-term is that US consumers do not have high savings rates to whether any economic recession. The two most important drivers of the well being of consumers are whether real earnings are growing, which has not been the case, and how technology is improving the value of their dollar by decreasing costs. We aren’t discounting the inflation created by the Federal Reserve, but it’s important to recognize that every company in America, as a function of competition, aims to provide the greatest value at lowest cost, which is a deflationary force and is beneficial for consumers.

The US Consumer Spends The Most Globally

The chart below shows a relative comparison of how much consumer spending drives GDP growth in a few prominent countries.

70% Of American GDP Driven By Consumption

The US consumer is the highest percentage of GDP as it’s near 70%. This is a few percentage points higher than 10 years ago. There are a few reasons why the American consumer is so important to GDP growth. Firstly, as we mentioned earlier, the US consumer gets an opportunity to buy the best products offered in the world because most global companies want to sell their products in the US because of the increased spending power of the population relative to global markets. Relatively free competition in many industries in the US provides the best products at the cheapest price. However the easy business environment has been severely handicapped following the 2008 financial crisis, when politicians increased the number of regulations, with it decreasing the number of small businesses. While industries such as health care have suffered tremendously, Silicon Valley is still the place where the greatest technology companies in the world are founded.

Secondly, there is a culture of consumerism that promotes the idea that those with the newest and best products are happiest. Thirdly, Americans enjoy being the holders of the world’s reserve currency, which affords them increased purchasing power and relative safety and stability when compared to other markets.

You also need to look at the other parts of GDP which are stronger in other countries, but weak in the US. For example, government spending doesn’t drive GDP in America the way it drives GDP growth in China. The US also has a trade deficit. This means imports are larger than exports. Exports increase the GDP, while imports decrease it. The impact of the trade deficit means consumer spending is more heavily relied upon to push the GDP higher. Lately, companies haven’t been investing as much in the US; this is another drag on GDP growth.

Looking at the real spending growth of only the goods in the CPI report makes for the most accuracy. You can argue about what’s in the CPI report, but that won’t manipulate this chart because it’s an ‘apples to apples’ comparison. Spending growth has been moderate in the past few quarters. Real wage growth is needed to help improve GDP growth in 2018. That’s not a pipe dream because the ratio between the U6 unemployment rate and the U3 unemployment rate is at a level previously consistent with high wage growth.

Online retail sales were 8.9% of total retail sales as of Q2 2017. They were only 7.1% two years prior. This percentage has never stopped increasing since it was first calculated in Q4 1999. The retailers who do not invest heavily in technology are the most unprepared for this change in the way consumers purchase products. Companies like Target aren’t handling this change well, but Wal-Mart is doing well. In Q3 Wal-Mart’s e-commerce sales were up 50% in its one year anniversary of its acquisition of Jet.com. The chart below shows the trend of online retail growth. 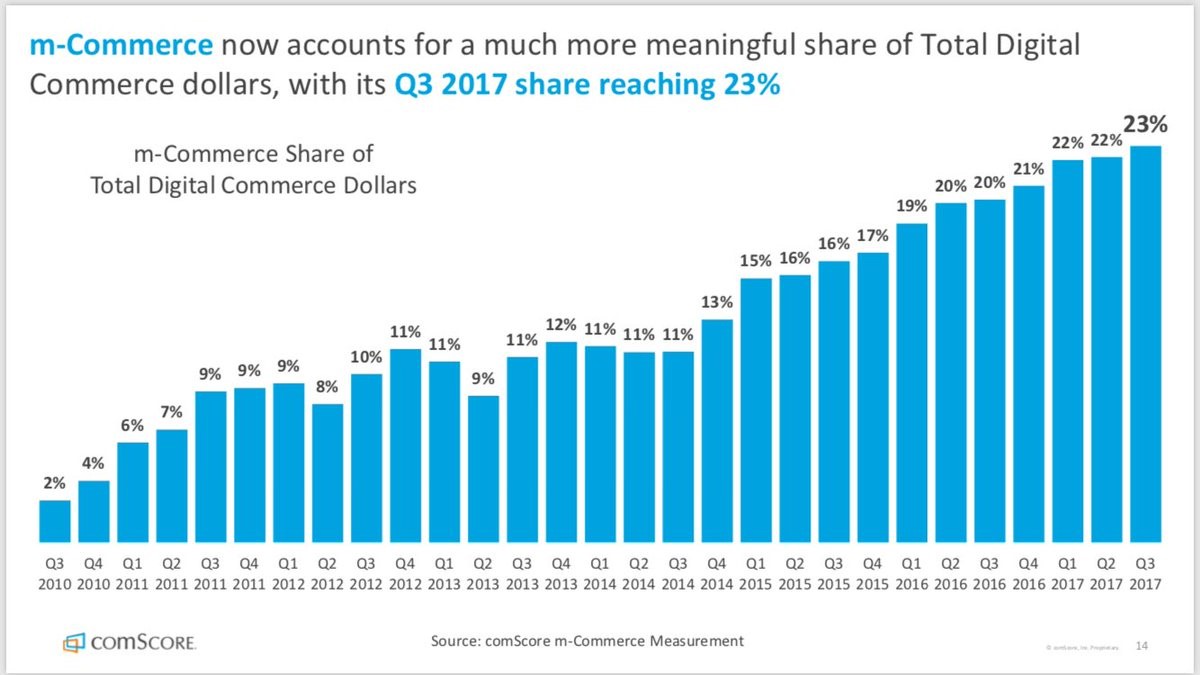 Mobile commerce has been growing as a percentage of e-commerce. The percentage has been consistently moving higher since Q3 2010. A company doesn’t have a complete digital strategy if it doesn’t have a plan for mobile. This reinforces the point we made earlier about how companies make your dollar worth more. The smartphone in your pocket is more powerful than the super computers a few decades ago. The convenience of its small size encourages more spending.

Diving deeper into the specifics of the mobile growth trend, the chart below reviews the sector breakdown between desktop and mobile sales. 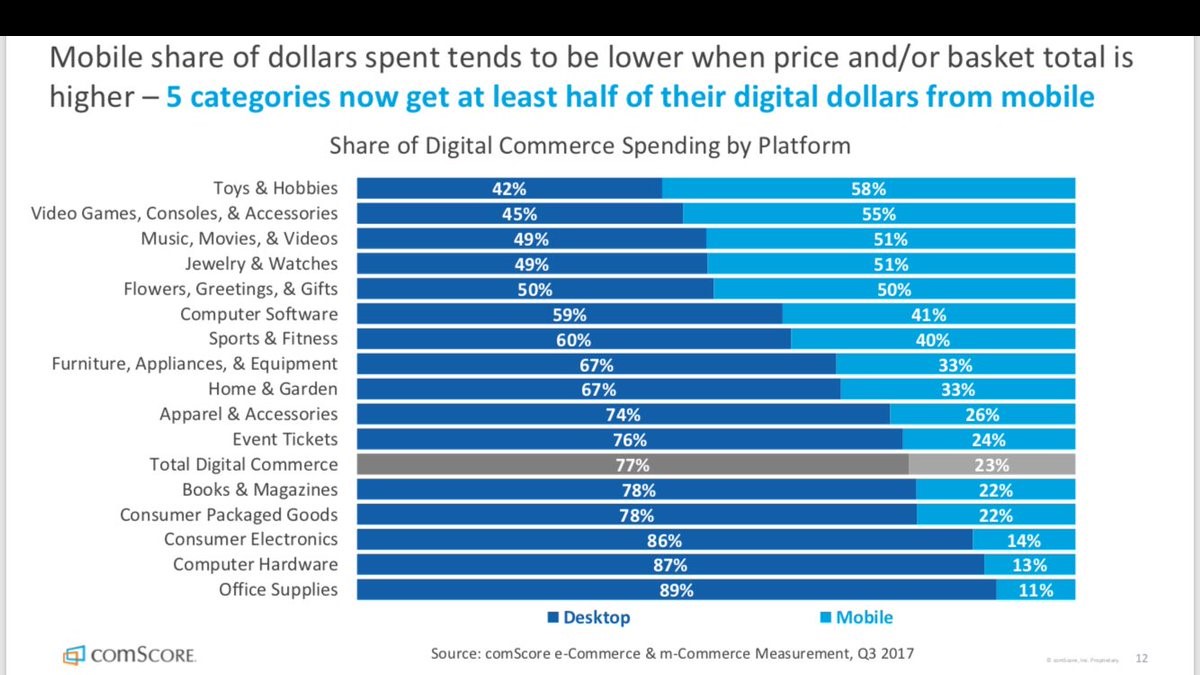 Mobile Is Used For Small Purchases

Desktops and laptops are in the desktop category and smartphones and tablets are mobile devices. Toys & hobbies have moved the most towards mobile. Mobile spending on goods or a basket of goods is lower when the total cost is high. That makes sense because desktops offer more screen real estate to show all the details of a very important purchase. The age of the consumer also matters since a younger person would be more likely to buy goods on a mobile device than someone who is older.

Apparel Is The Biggest Segment Of Online Sales

Getting back to total online sales, the chart below shows how apparel and accessories has grown faster than the overall category in 12 of the last 15 quarters, making it the biggest segment in the category. 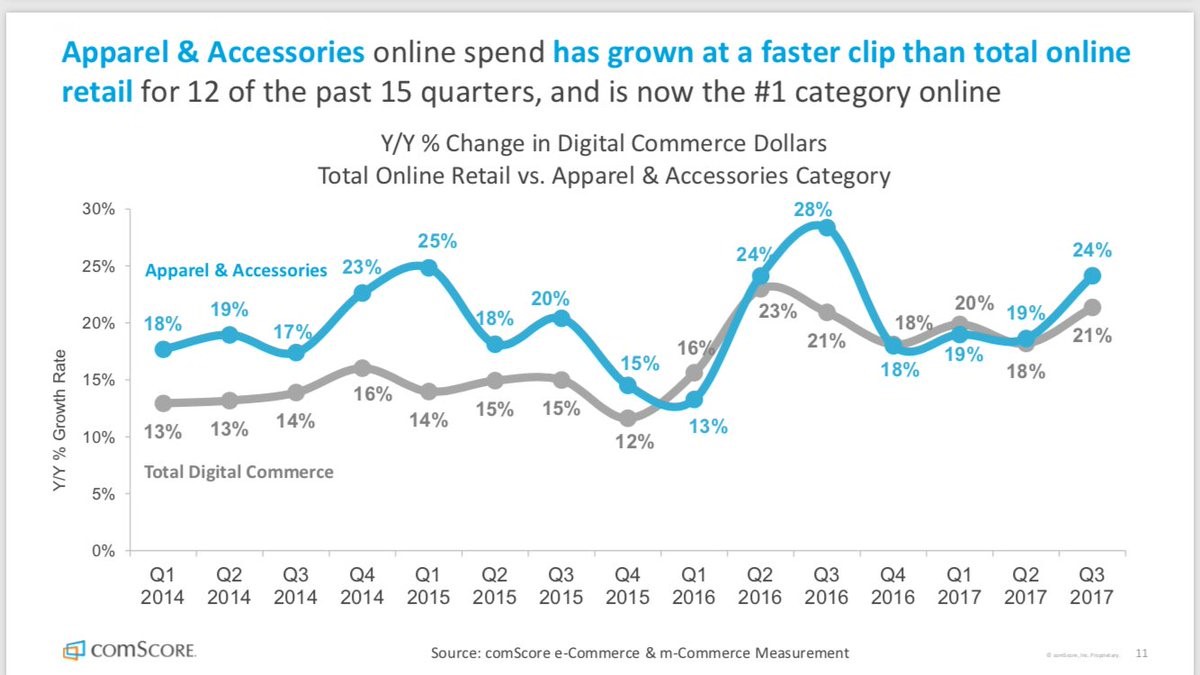 Apparel Has Become The Largest Segment In Online Retail

Apparel and accessories gets 26% of sales from mobile devices which is slightly higher than the average. The chart also shows online growth in the grey line. This double digit growth is why it has consistently gained share as a percentage of overall retail sales.

One of the trends skeptics have been harping on for the past few quarters is the recession in restaurant sales. This had been a great leading indicator for recessions in the past, but this time it didn’t signal a recession was coming. It looks like the restaurant industry will improve its state in 2018 and there still hasn’t been a recession. The chart below shows the bifurcation in the performance of restaurant sales. 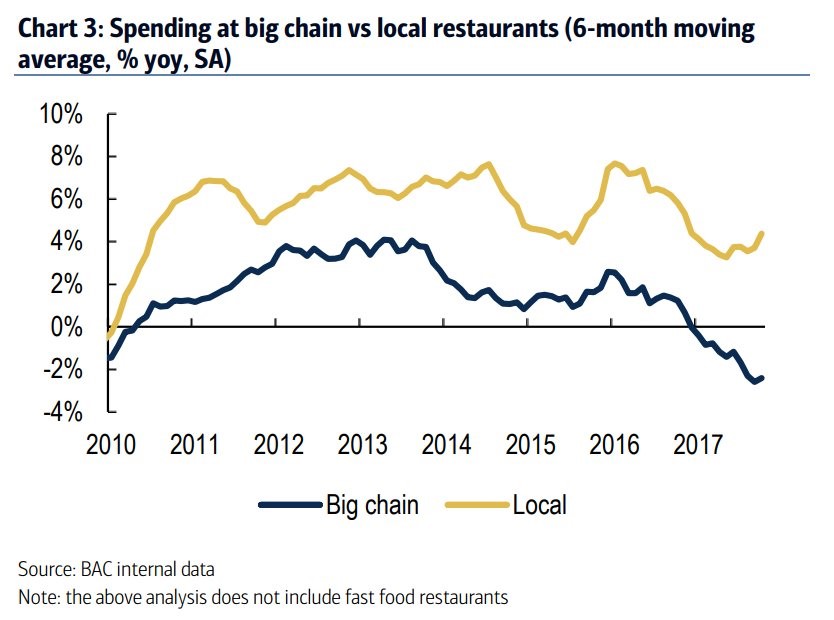 Big Chains Losing Out To Small Ones

Local restaurants have consistently grown faster than big chain restaurants in the past 7 years. In 2017, the situation got worse for big chains as spending started to decline. With consumers demanding more uniqueness from restaurants because they like to share their experience on social media, it’s not surprising to see local restaurants beat out generic nationwide chains.

Hopefully, you gained an understanding of the state of the U.S. consumer spending from this article. Spending growth is okay which suggests that the US economy is currently not at risk of dipping into a recession since consumer spending is one of the biggest components of GDP growth. The overall trend in consumer behavior is more spending online, mobile and the preference for local restaurants over nationwide chains.