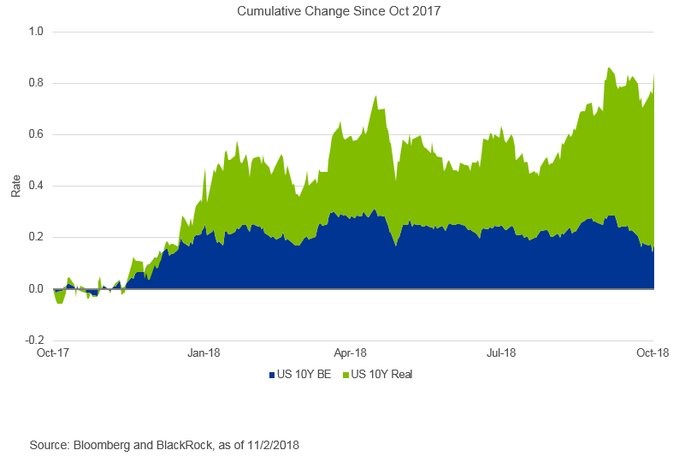 Under Powell’s reign, the FOMC statements have gotten shorter. It’s not as if policy has suddenly simplified since the rate hikes in 2019 will push rates near the neutral rate or above it, making the decisions difficult. Secondly, the Fed is continuing with its balance sheet unwind which is probably going to end in the next 1-3 years barring a recession. The image below shows the November FOMC statement where the Fed kept rates the same as was expected. Powell has been open in his press conferences which are being posted to YouTube, but the statements give the appearance that the Fed doesn’t want to interfere in the marketplace. The Fed didn’t mention the stock market correction in this statement and didn’t change policy guidance during the volatility in October. That was probably a good idea because stocks have snapped back quickly. Chasing stocks after normal corrections makes policy confusing. Investors had gotten used to guidance changes after volatility in the past. It will be interesting to measure the sensitivity of the new FOMC because at some point the Fed probably will step in if stocks crater or the economy falters. As we reviewed previously, here’s the magic number of when the Fed could reverse course. There was only one material change to the FOMC statement from the September meeting to the November meeting. The Fed stated business investment “has moderated from its rapid pace earlier in the year” instead of saying it grew strongly. That change comes because the Q3 GDP report showed business investment grew 0.8% after following growth of 8.7% in Q2 and 11.5% in Q1. The Fed didn’t mention the possibility that this change in investment growth may have been caused by the fiscal stimulus losing steam.

Even though it’s nice for the Fed to avoid commenting on short term action in stocks and avoid claiming the stock market is overvalued like Yellen’s Fed did on multiple occasions, it’s slightly disconcerting that the Fed didn’t acknowledge the weakness in global growth, the weakness in housing, the trade war, the fiscal stimulus running out of steam, or the acceleration in wage growth. These topics will probably be brought up in the December 19th press conference where the Fed is expected to raise rates for the 4th time this year. As you can see from the Merrill Lynch chart below, the Fed will have the highest gap between the ECB repo rate and the Fed funds upper bound since at least 2000 when it raises rates in 2019. The Fed is nearing its long run rate. The long run rate is difficult to get a grasp of because the goal post moves. The Fed could easily raise the long run rate to prevent the current rate from exceeding it. That theoretical (made up) number won’t stop rates from hurting the economy at a certain point.

The yield curve tells us when the Fed will stop hiking rates. The current difference between the 10 year yield and the 2 year yield is 30 basis points which signals the Fed will continue hiking rates. Because real rates have driven the long bond yield higher, the recent hawkishness hasn’t flattened the curve. Predicting where the curve is headed isn’t as easy as trend extrapolation. You also can’t just look at how much the Fed is about to raise rates and expect the curve to flatten by that amount because some of the hikes are already priced in and the long bond yield isn’t stationary. As you can see in the BlackRock chart below, the 10 year real yield has been increasing while the break even rate recently has been falling. The spike in real yield is preventing the 10 year yield from falling below the 2 year yield and inverting the curve. The 10 year yield has been stable in recent weeks, masking this change. The 10 year real yield has broken out above its 5 year range between 0% and 1%.

While the Fed is ignoring the weakness in housing, we’ll continue to analyze the situation. The two charts below are from Fannie Mae. The top chart is the home price sentiment index. It fell 2 points in October to 85.7. It peaked at 92.3 in May. Five of its six components had weakness. As you can see from the bottom chart, the percentage saying now is a good time to buy a house fell 5 points to 21%. That’s just above the low since 2011 of 18% in August 2017. Those saying it was a good time to sell also fell 3 points to 35%. Those saying home prices will go up in the next year fell 2% to 37%. Only 9% think house prices will fall. The net percentage who think mortgage rates will rise fell 1 point to -57%. Unsurprisingly, only 4% expect rates to fall. The index measuring the confidence people have that they won’t lose their job fell 1 point to 78%. That’s near the cycle high as the labor market is very strong. The only indicator that didn’t fall month over month was the percentage of respondents who think their household income will be significantly higher in the next year; it was flat at 19%.

The national Home Price index was up 0.4% month over month and 5.6% year over year in September. CoreLogic is bearish on housing as it expects prices to fall 0.6% month over month in October and rise only 4.7% in September 2019 compared to September 2018. The chart below shows that CoreLogic expects the HPI to slow its growth before bouncing slightly next year. It expects a consistent slowdown in the Case Shiller index. The most interesting part of the CoreLogic report is the findings on young millennials because those in their mid-20s are supposed to drive demand for houses and boost prices in the next 5 years. 73% cite affordability as a barrier to home ownership which is way higher than any other age group. That’s not a surprise because many still have student loans. 64% regularly follow home prices in their local market. This tells us they’re interested in buying and not interested in moving far away. 40% are extremely or very interested in home ownership now. If they act now, price growth may not fall like CoreLogic expects. Finally, 80% expect to move in 4 to 5 years. That’s not a shock because first time home buyers are usually in their early 30s.

The Fed isn’t changing course even though inflation is at its target and there are a few negative catalysts in 2019 namely the tariffs and the fiscal stimulus running out of steam. The housing market is expected to weaken because few think now is a good time to buy a house. The good news is 40% of young millennials want to buy a house now and 80% will be moving in the next 4 to 5 years barring a recession.