How Will The World Look After COVID-19? 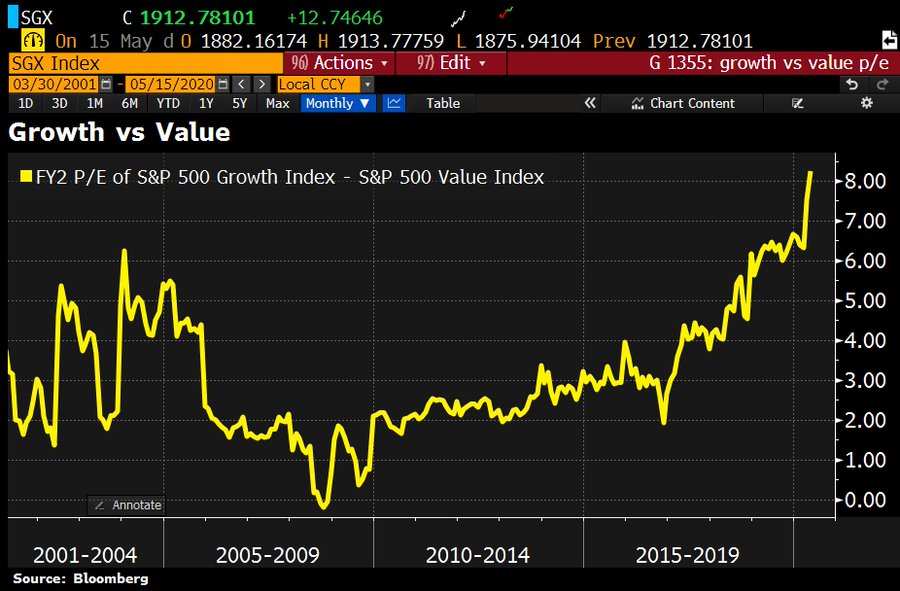 Sometimes change can accelerate even in the darkest times. We have seen increased use of technology to avoid the virus, yet have a sense of normalcy. The two biggest trends are working from home and shopping online. Square recently announced it is allowing employees to stay home to do work permanently. Even after this is over, there will be more people working from home than prior to the pandemic. That’s an obvious perspective, but the main question is how much of a change there will be. Whenever a big event happens, there always claims that the world will never be the same. With the rally in the stocks that benefit from these changes, the market is either thinking everything will be different or is short term oriented. When true optimism on the potential for a vaccine or cure occur, the work from home and online shopping stocks underperform, supporting the notion that some of this movement is short term.

On Monday, when positive news about the potential for a vaccine came out, Etsy stock fell 8.7% (online shopping play). The market has become so volatile, that even long term investors need to react to movements. If you own a stock for the long term and it triples, you will probably consider selling. That’s human nature and arguably the prudent course. In keeping with the point that we have seen an acceleration in recent trends (explaining why Etsy stock rose 170% from March 20th to May 15th), the chart above shows the spike in e-commerce as a percentage of retail sales. We had years worth of growth in 8 weeks. E-commerce as a percent of retail sales went from 5.6% to 16% in 10 years; it went from 16% to 27% in 8 weeks. At the very least, there will be a deceleration in the movement towards online and at the most, when the economy normalizes, e-commerce’s share will fall.

The New Normal Isn’t That Different

The new normal after the pandemic isn’t going to be dramatically different from the world prior to the pandemic. The trend of people working from home and online shopping will still be in place along with hopefully more cleanliness. However, people will still want to gather together in person. The Marcus surveyed people asking them which activity they miss with the quarantine in place. 93% said they miss going to the movies. This implies online streaming will still be prevalent, but there’s a place for theaters as well.

78% said eating out. The chart above shows the likelihood consumers will visit restaurants in person as soon as they reopen. 47% of consumers are very likely or somewhat likely to go to restaurants as soon as they open. The 21% and 18% who said they weren’t sure or are somewhat unlikely will probably wait until the situation is proven safe. To be clear, we have seen an increase in cautiousness in May compared to April which is understandable. The most cautious people probably will wait until there’s absolute certainty they won’t catch COVID-19.

An ancillary point is the possibility that malls aren’t just closing because more people are shopping online. Other malls with better strategies are eating their lunch. The top “A” rated malls will be in fine shape after the crisis ends. Recessions eliminate the companies that had been doing badly for years (C& D rated malls).

We aren’t scientists and we don’t claim to have any expert knowledge on COVID-19. However, we said we would look at Georgia’s data after it reopened to get a glimpse of how the rest of the country might look once it reopens. As you can see from the charts below, there hasn’t been a spike in the 7 day moving average of cases or deaths even though there has been an increase in testing.

The major tech firms already had been rising as a percentage of the S&P 500 before this recession. Sometimes momentum trades end during recessions, but this time it accelerated because this was a unique situation which helped these firms (on a relative basis). As you can see from the chart below, these big tech stocks are 23.1% of the S&P 500. Almost everyone owns them. Even the best investments can be problematic when people are all in. As of May 15th, energy and materials were 0% and 1% of the low volatility S&P 500 index. The crowd is all in on these stocks and all out of materials and energy.

Because of the sector rotation into healthcare and technology and away from energy and the banks, the growth index is more expensive than value than it has been at any time in the past 20 years. It’s higher than the peak of the tech bubble. That being said, the big tech stocks mostly have deep moats. They are highly profitable. This isn’t like the tech bubble. On the other side, the fracking companies have developed amazing technology which ironically has hurt them because they have produced more oil which lowers the price of the commodity they sell. The major question with that group is how far breakeven costs can fall.

We tried to take a balanced look at the rally in technology stocks. This isn’t a bullish or bearish case for these firms. It’s possible the increase in retail trading activity is furthering the outperformance of growth stocks because they are more well-known and exciting. Finally, recognize that the term “value” is a bit of a canard. That’s because if you buy a growth company for the long term, you think it presents good value even though it has a high multiple.