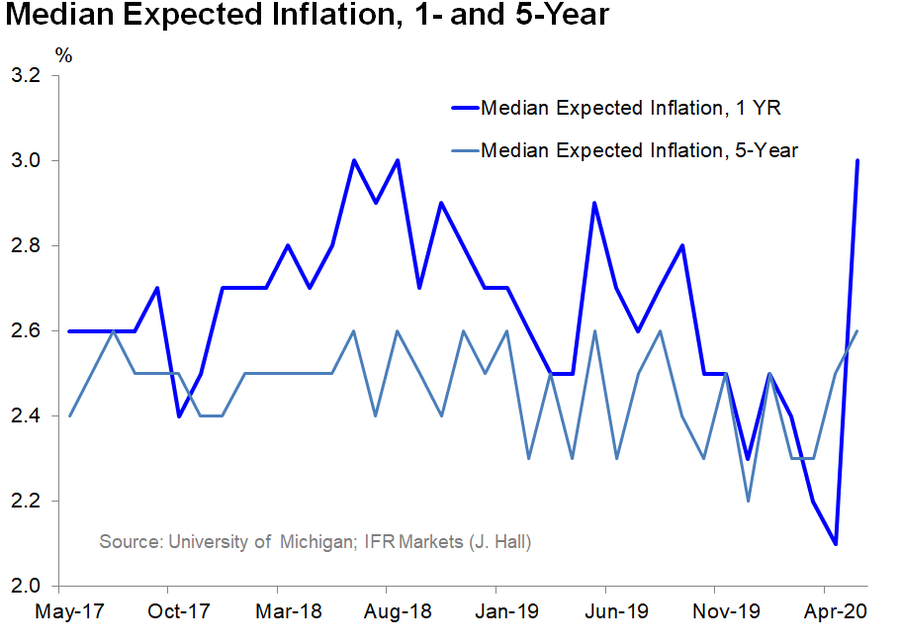 We’ve mentioned that the Atlanta Fed Q2 GDP Nowcast was about to get worse because all of the data from April wasn’t included yet. Now most of the data is included because the retail sales and industrial production reports came out. As a result, the GDP Nowcast fell from 34.9% to 42.8% which is a massive decline unlike anything this Nowcast has ever seen.

As you can see from the chart above, that puts it below the bottom 10 average forecast. The Nowcast is now too negative because the economic data in May and June will be stronger than April. These types of trackers assume growth stays at the level of the quarter to date data. The estimate for Q2 real personal consumption expenditures growth and real gross private domestic investment growth fell from -33.9% and -62.8% to -43.6% and -69.4%. These results are beyond anyone’s most negative prediction before COVID-19 occurred. Quarter over quarter GDP growth is probably going to spike in Q3 if there isn’t a 2nd wave of virus cases. There will likely be a shift to year over year growth because high growth won’t necessarily get us back to even. It’s like if a stock falls from $10 to $5 and the rises 40% to $7.

Who says credit ratings don’t matter? The chart below is perfection. It shows equity performance by credit rating.

There is a meme that states investors said they would love to buy their favorite companies at a 20% discount, but when they fell 30%, they tried their hand at the hardest hit companies that fell over 50%. There is temptation to buy companies that fell sharply because traders are anchored towards expecting them to get back to their previous highs. Many will, but many won’t because of equity dilution and huge increases in debt. It’s not a bad idea to diversify amongst stocks that can rise in multiples and companies with strong businesses trading at a reasonable price.

It’s all about managing risk. That’s not to say all the stocks that fell over 50% are risky. There is safety in value if the company has a strong balance sheet. To be clear, there’s more to it than picking low PE stocks. Also, be careful of buying the few stocks that fell a lot, but are still expensive. Just because a stock is down a lot doesn’t make it cheap. Maybe it fell from extremely expensive to modestly above its fair value. It’s lazy to say a stock being down a lot suddenly is below its intrinsic value. The final aspect to consider is whether the world will be different because of COVID-19. If you have a stock that’s cheap and has low debt, but operates in a business that you think won’t go back to normal, it’s not a buy. Maybe there won’t be any major changes to society; this is just something you need to think of.

If you thought it was impossible for the data to improve over the next few months, think again. We already had consumer sentiment improve in May. When data goes from awful to slightly less bad, it’s a huge positive for markets. As we mentioned previously, the sentiment index is near its bottom. There’s only a certain amount it can fall. Previously, expectations were holding the index up, but this time the current index drove improvement.

The overall index increased from 71.8 to 73.7. The current economic conditions index spiked from 74.3 to 83 following the gains in the stock market. The expectations index actually fell from 70.1 to 67.7 which is a new recession low. The stimulus checks, low rates, and discounting improved buying conditions.

On the other hand, personal financial conditions fell to the lowest level in almost 6 years. The biggest declines were in upper income households which is bad because they do the most spending. That’s not a surprising data point because the lower class is getting more money in unemployment insurance than their usual pay. Inflation expectations for the next year rose from 2.1% to 3%. Maybe inflation estimates aren’t as well anchored as economists thought. That’s the largest 1 month spike since November 1979. The spike was likely related to the increase in grocery costs. The 5 year inflation estimate rose to 2.6% which is tied for the highest in over 4 years.

The top concern about the pandemic was health as it rose 4 points to 61%. Financial damages fell 5 points to 17%. There were increased worries about social isolation as that rose 7 points to 21%.

In the states that have reopened, the economic data is getting less bad. As you can see from the chart below, there is a steady uptrend in the daily spending growth rate at restaurants in Georgia and Texas. Georgia’s labor market was the worst hit by the shutdown which means if it can recover, the other states can too (barring much longer shutdowns).

Q2 GDP growth will be terrible, but likely not as bad as the Atlanta Fed Nowcast indicates. The data should improve in May and June as evidence by the consumer sentiment report and Bank of America aggregate card data. Consumers expect more inflation in the coming year and 5 years. The stocks with the best balance sheets and highest credit ratings have done much better than the highly indebted low credit rating firms.