How The Fed Could End The Bull Market 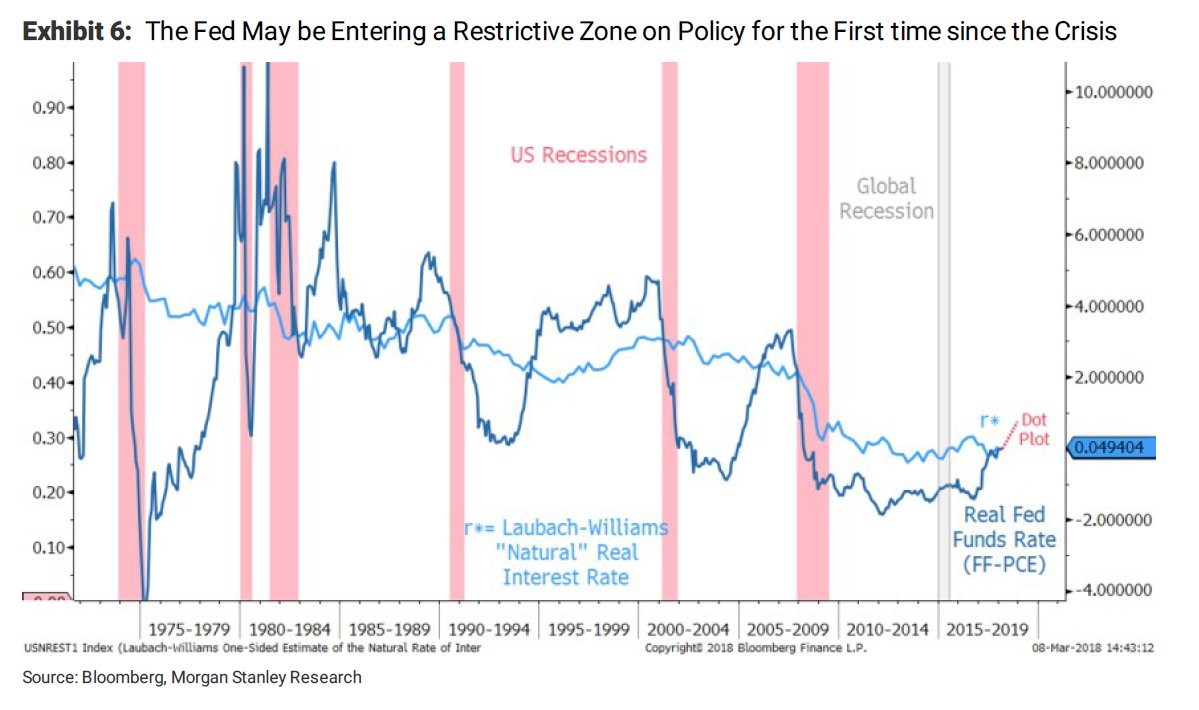 With the new economic and trade policy policy commentary coming out of Washington seemingly on a daily basis, along with the much discussed stock correction from February, which was caused by the unwind of the short volatility trade, it’s easy to lose track of what the Fed will do in 2018 and how it will affect markets. Prior to the March 2018 Fed meeting the biggest event was new Fed chair Jerome Powell’s testimony in front of Congress where he seemed to express bullishness on the U.S. economy. Powell’s bullishness combined with the January labor report caused a sharp reaction in markets as real rates rose, inflation estimates increased, the expectations for Fed hikes in 2018 increased, and stocks fell temporarily.

It’s amazing how the market reacts to news in such an exaggerated fashion. Because Powell said the Fed would revisit its dot plot, the markets hyper-focused on the Fed being hawkish even though Powell also made many statements which could be considered dovish. We would be shocked if the Fed didn’t revisit its dot plot since new economic data points have been released since the last meeting. This doesn’t mean major changes will be made, but at least reviewing policy is always expected.

The other over the top reaction was when the market suddenly thought inflation was going to soar based on the heightened average hourly earnings growth in the January labor report. That was a silly reaction because there is still a lot of slack in the labor market despite what the misleading unemployment rate and jobless claims reports state. The labor participation rate for prime aged workers still isn’t at the level it reached in previous cycle peaks. Secondly, most of those reports are revised, so you can’t take each preliminary report as if it’s perfectly accurate. The February BLS report completely disproved the January report because the average hourly earnings growth for January was revised down from 2.9% to 2.8% and the growth in February was 2.6%.

The two reasons for this deceleration were the increase in the work week and growth in the labor market. The work week went up from 34.4 hours to 34.5 hours. Whenever the work week increases, the hourly earnings growth usually falls. The weekly earnings grew 2.9%. That was still relatively low considering the jobs growth of 313,000. The economy absorbed those jobs without huge wage growth because many workers came from off the sidelines with the labor force participation rate increasing from 62.7% to 63%.

When we say the market is moving in an exaggerated fashion, we are saying the market is taking a small bit of information and pricing it in as if it’s a long term trend that’s guaranteed. As we mentioned, one of the trends in the past few months is the increased odds of a hawkish Fed. As you can see from the chart below, the market went from expecting less than 1 hike in 2018 in September, to expecting 3 hikes in 2018 in March. The Fed will likely hike in the March meeting, marking its first major decision of the year on rates. The chances of a 4th hike have crept up to 30.5%. 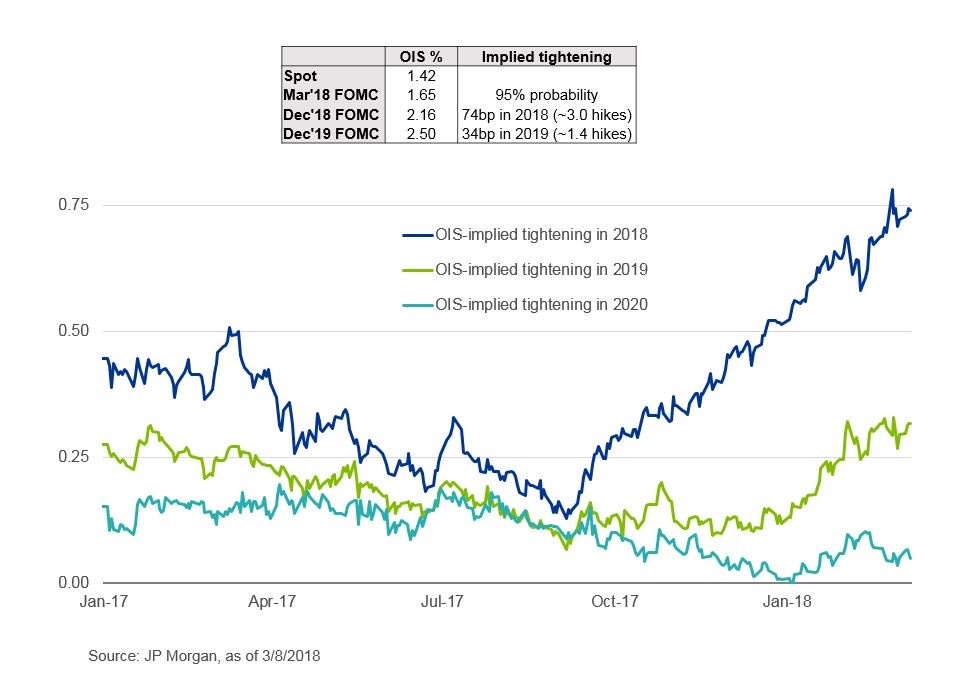 Since the decision on those hikes will be made in the 2nd half of the year, the market will price in the odds based on guidance. The decision seems to be between 3 or 4 hikes, but 2 hikes are also a possibility. The key problem with hiking 4 times is it could invert the yield curve which would start the time clock for a recession. The current difference between the 10 year yield and the 2 year yield is 61 basis points. This means there isn’t an issue yet. Some investors mistakenly think this shape of the yield curve means a recession is close, but it can take a few quarters to invert from here. If the Fed were to hike twice in 2018, it probably wouldn’t invert in 2018; if the Fed were to hike 4 times, it probably would invert soon.

A Hawkish Fed Is Possible

For about a decade, the Fed has had a dovish monetary policy. Some say this has caused inefficiencies in the market. If it has, we’ll find out what they are in the next few years because the Fed is projected to move to a hawkish policy according to its dot plot. As you can see from the chart below, the dot plot will rise above the natural interest rate potentially after the March rate hike. The Fed funds rate will be above the PCE inflation metric this year. Every quarter point matters.

The March meeting is very important to watch even though we know the Fed will most likely raise rates. If it’s considered a dovish hike, stocks will rally because the Fed will avoid making the mistake of hiking 4 times in 2018. If it’s hawkish hike, that will be a problem for stocks; a yield curve inversion will be closer than before. It’s important to see how the Fed reacts to the February labor report because while it was strong, there’s no reason to hike rates aggressively if the wage growth isn’t there. The Fed should only hike rates when inflation forces it to do so. Why invert the yield curve and cause a recession in 2 years if the average non-supervisory worker hasn’t gotten much real wage growth? One factor to watch is shelter inflation. Housing is 41.8% of CPI. If shelter inflation increases, 4 rate hikes will be necessary. As you can see in the chart below, lately it has been stagnant. 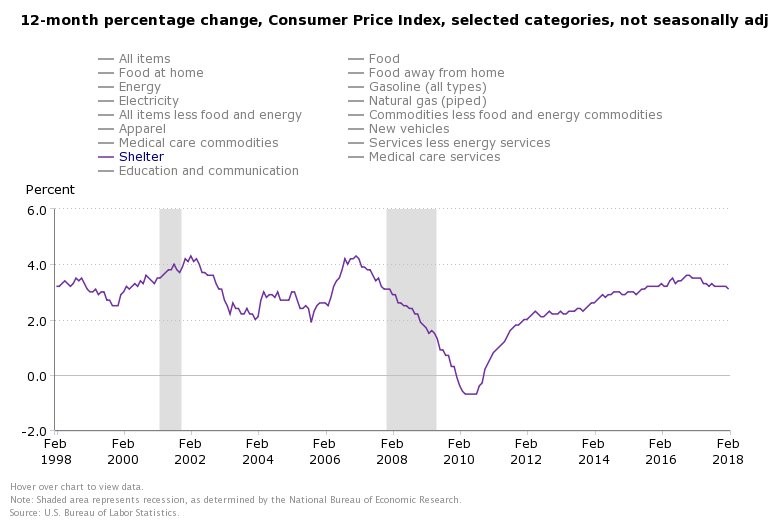 Bullish investors should be worried about the Fed overestimating the strength of the economy and inflation, as a result raising rates quickly. The Fed raised rates in 2017 even though inflation was weak because the Fed said the disinflation was transitory. If the Fed does that again, the bull market could be over.

The most important question investors need to have answered is if Powell’s hawkish lean is representative of the entire FOMC or if the Fed isn’t really considering 4 hikes this year because the other members are much more dovish than him. The actual March decision doesn’t matter (unless the Fed hikes twice or doesn’t hike). The guidance is very important as it will signal policy for the rest of the year.