In the age of central banking the normal expectations for financial markets and monetary policy need to be thrown out the window. Investing is a process of constant change. In fact, the purpose of markets is the discovery of fair value. To be a good investor, you need to reinvent your process when the environment changes. With the Swiss Central Bank (SNB) becoming the 8th largest holder of U.S. stocks, the game has changed again. We’ll review why that’s the case, possibilities of future SNB policy, and what the bank owns in this article.

The Swiss Central Bank owned $84 billion in U.S. stocks as of the end of June. The SNB owns U.S. stocks and about $20 billion in European stocks to manipulate the Swiss Franc. As of the June quarterly report, the SNB said the Swiss Franc was “still significantly overvalued.” The SNB is manipulating the US stock market to get its exchange rate where it thinks it needs to be. This is reckless policy which isn’t considered by most economists and central bankers. The SNB owns about $10,000 for every person in Switzerland. That shows how important this policy has made the country to our markets.

A small country, using the same type of policies the BOJ and the Fed have pioneered, can have outsized effects on the global economy. It’s sort of like when Greece plunged the economy into chaos when it considered exiting the Eurozone, except the SNB is self inflicting this wound without helping the underlying Swiss economy.

A key point to look at in this Zero Hedge chart is when the purchases have been made in the past few quarters. As you can tell, the first quarter has been when the value of the SNB’s holdings have increased. The $13.2 billion increase in Q1 2016 was pivotal because the stock market was crashing in early 2016. If it wasn’t for the SNB, the market could have fell more. It’s possible the SNB has an ulterior motive with these purchases besides currencies as it’s in the country’s best interest for the US economy to be healthy. Hence, it could have been buying to prop the US stock market up. 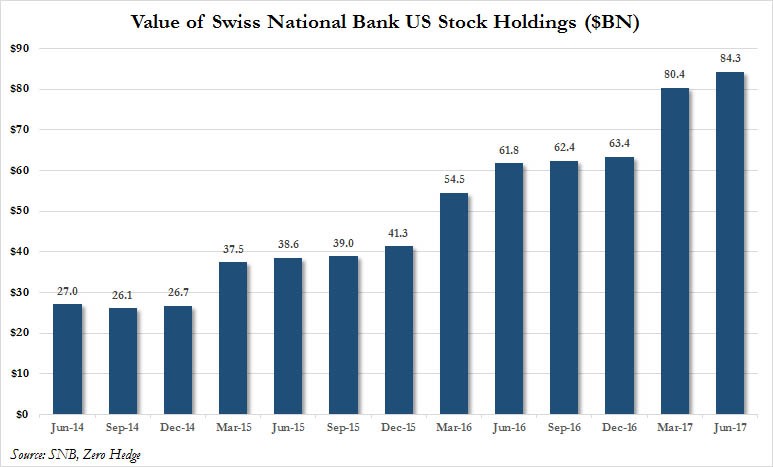 Swiss Central Bank Holdings Over The Past 3 years

Besides distorting the entire market, the SNB’s purchases affect individual firms. The SNB is a big fan of Apple stock as it is its largest holding. In fact 24.65% of the SNB’s total holdings are in the tech sector. According to the SNB website, the bank’s “investment policy takes into consideration all central bank requirements and is based on comprehensive risk/return analyses.” The SNB is ruining the free market pricing of Apple stock in its attempt to make monetary policy. Is the SNB buying Apple stock because it thinks the stock is undervalued or is the reason that the firm is the largest one in the world? It’s most likely doing so because Apple is a big firm because it would have a bigger effect if the purchases were of a small cap. This gives Apple an advantage over its competitors because it is large. That’s disturbing and has serious ramifications for the real economy as competition in the US declines with larger companies using their extremely high equity valuations as grounds to acquire or put out of business competitors. This pushes profit margins to artificially high levels since there is less competition, and creates less innovation and choice for consumers. 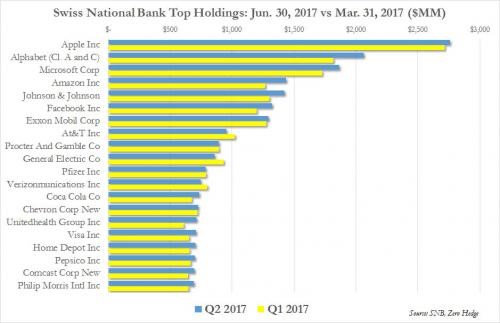 The SNB is one of the most important investor in the U.S. stock market because it can print any amount of currency to buy stocks. It can act as a proxy for the Fed by buying stocks after the Fed unwinds its balance sheet to insure financial stability in a game of hot potato. On a local currency performance, the SNB has made a profit every year since 1999. Theoretically speaking, the SNB can buy 10 times the amount of stock it is buying now, inflating the U.S. stock market further into a huge bubble. It’s especially possible when the market sees volatility like in early 2016 except worse. If earnings fell in a recession and the SNB propped up the market, valuations would soar. If the SNB decided to sell all its stock tomorrow, it could cause an adverse impact on US markets.

Some libertarian thinkers aren’t following this premise as you can see from the tweet where Editor at Large of Reason Magazine says the premise is absurd. A few years ago, it was absurd to be having the discussion about the SNB manipulating the stock market, but now the SNB owns $84 billion in U.S. stocks, so it’s time to change your thinking when the scenario changes. Some libertarians say the Swiss economy would be hurt if the SNB decided to print more currency, so it wouldn’t do it. The SNB could redistribute stock market profits to citizens to adjust for purchasing power losses from the act of printing currency to invest in markets. What if the SNB decided to print currency, buy stocks, and then take a profit just like the Fed did in the bond and housing market? It could decide buying European stocks are a better value, wrecking U.S. markets.

It’s important to understand how this argument is playing out. The scenarios outlined aren’t predictions; they are possibilities and we would venture to say they are probabilities (more likely than possibilities). Doing your own risk analysis, it makes sense to review the possibilities, especially considering what was impossible 20 years ago, is now happening. Unfortunately, the place where the most innovation is occurring is at central banks where they are contorting themselves to manipulate markets in any manner they desire, something that cannot and will not happen indefinitely.

The final point we’ll look at is figuring out what the SNB policy will be. The SNB chart shows where it forecasts inflation to go. It expects an increase in 2018 and beyond. You’d expect inflation to cause the country to pull back on stock buying. However, the country’s holdings increased more in 2016 when inflation was higher than 2015. Holdings increased $14.6 billion in 2015. In 2016, holdings increased $22.1 billion We aren’t accounting for the returns. If holdings increased in value, that could make it look like more buying is happening than actually is. The S&P 500 was up 9.54% in 2016 and was down 0.69% in 2015. That had an effect on the value of holdings, but the SNB could’ve taken profits to control the value of its portfolio if it wanted to. In summary, the SNB might slowdown U.S. stock purchases if inflation increases, but it might continue the buying like it has been doing despite inflation increases since 2015.

The Swiss National Bank has been manipulating U.S. stock prices through direct purchases while the Fed’s quantitative easing has affected stocks indirectly. Few economists are considering the repercussions of this policy as even libertarians scoff at the chance of this having a potential negative impact on US markets in the event that policy changes, despite their instinct to oppose central planning.