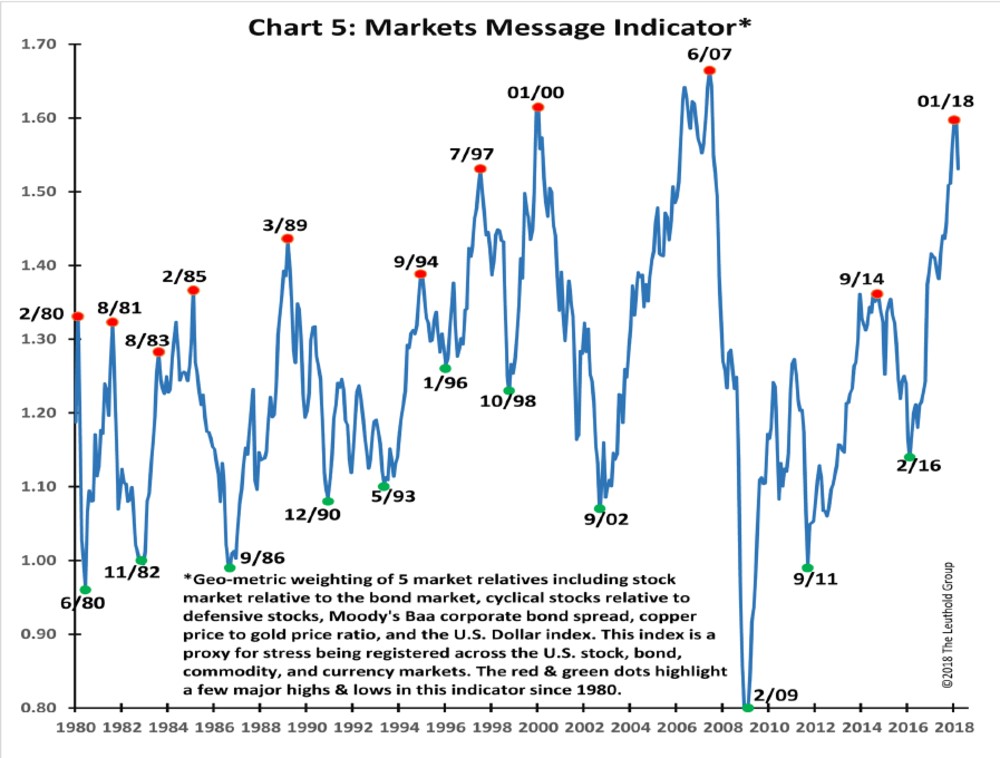 The stock market reached extreme levels in early 2018 as retail investors became the most bullish in the history of many surveys. That level of optimism is important because when investors get too excited it usually implies a top is coming. The difference between January 2018 and March 2000 and 1929 is that the economy is solid and corporate earnings are very solid as growth is expected to be 18% in 2018. Stocks moved up because of the tax cuts which created such extreme optimism. It’s impossible to determine what would happen without them. 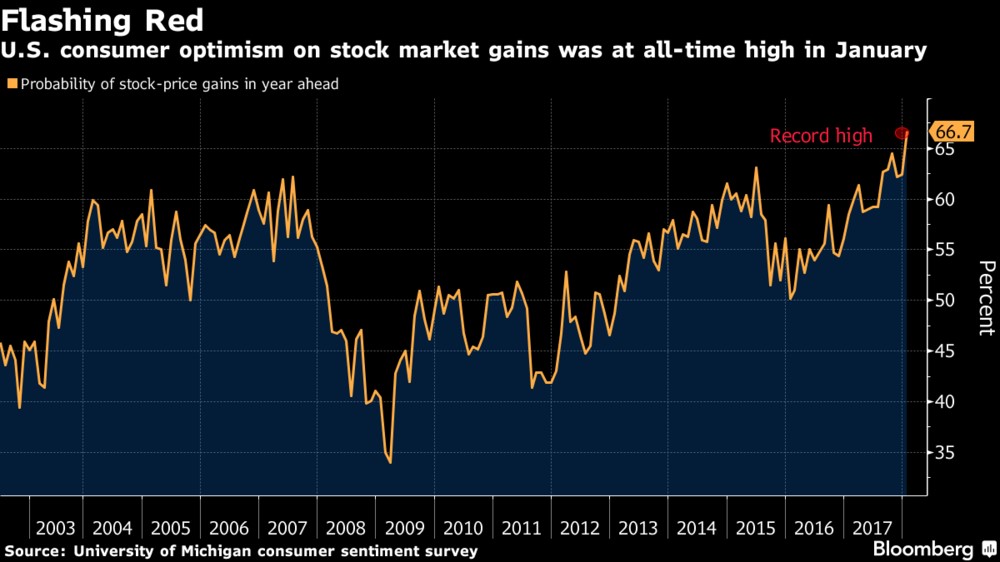 One risk to looking at the sentiment indicators is that they are motivated by partisan politics. As you can see in the chart below, after the elections, the Republicans suddenly thought the economy was getting better and the Democrats suddenly thought it wasn’t. 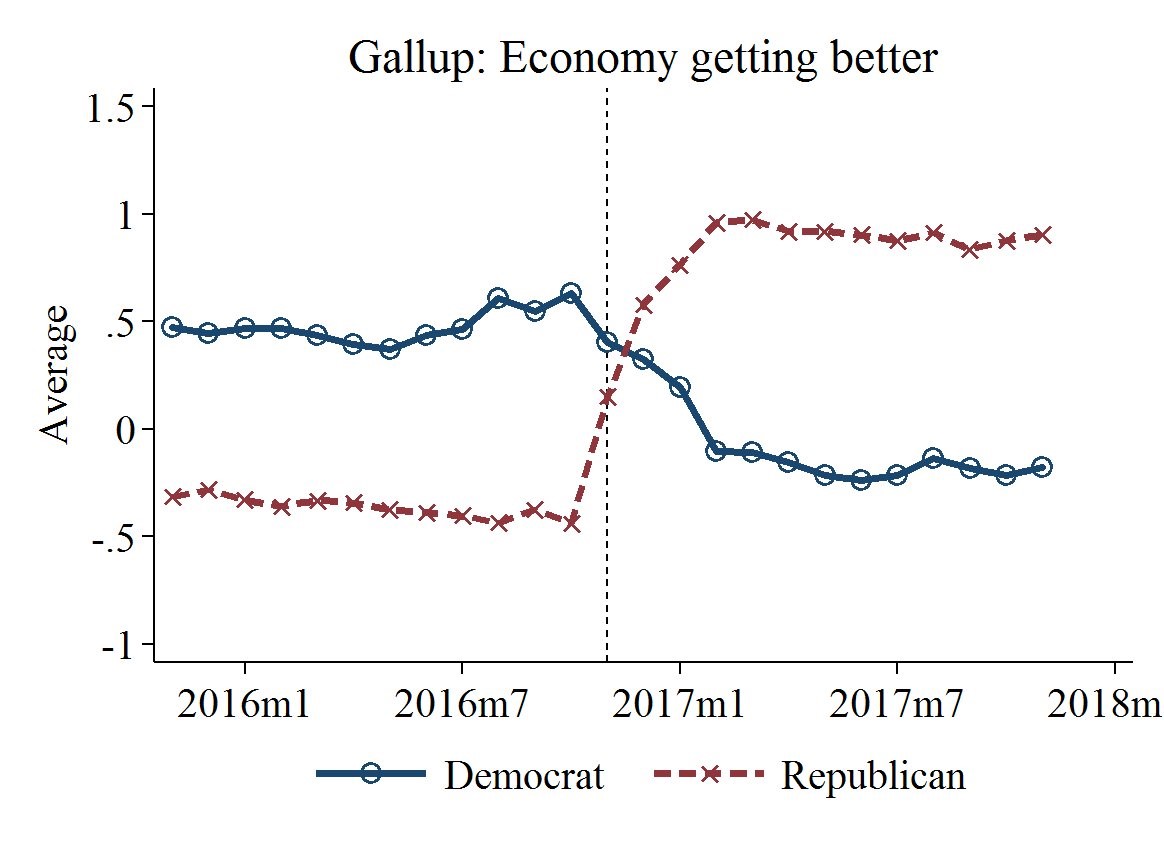 Retail Viewpoints Are Affected By Partisanship

Stocks Refused To Fall In 2017

To be clear, the optimism in stocks was very high in late 2017 and early 2018. We’re not completely discounting the sentiment indicators; we’re just providing balanced coverage. The headline from Forbes, seen in the image below, shows an example of the tenor of the market then. It says stocks refused to fall.

Despite the revolving door of government workers in the Trump administration, nothing pushed stocks down in 2017. Investors were only focused on what could go right. It’s impossible to measure uncertainty, but it doesn’t seem like risk was gone; it simply was ignored. There’s always economic uncertainty because the economy is always changing. The Fed raised rates 3 times in 2017 which was the quickest pace of this business cycle. There were reasons for stocks to fall at least temporarily.

A Better Measurement Of Risk Taking

It’s clear sentiment was extreme in 2017, but we can’t fully rely on the sentiment indicators because they are influenced by politics. We can look at the smart money, but it’s not as simple to fade what they are doing. The point of looking at retail money is retail investors act emotionally. Going against extreme emotional swings is generally a winning strategy. The chart below aims to depict how strong the ‘risk on’ trade is.

This is another proxy for how extreme to momentum got in early 2018. The more extreme it was, the less likely the equity multiples achieved then will be revisited in the next few years.

The market message indicator is a geometric weighting of the stock market relative to the bond market, the cyclical stocks compared to the defensive stocks, the Moody’s Baa corporate bond spread, the copper to gold ratio, and the U.S. dollar index. As you can see, the last two components are part of the ‘risk off’ trade and the first two are the ‘risk on’ trade. The dollar is a ‘risk off’ currency because the US economy is considered stable and the dollar is the foreign reserve currency of the world. Junk bonds are ‘risk on’ and treasuries and investment grade corporate bonds are ‘risk off.’ The separation of investments into these two categories is simplistic, but it often drives the market. You can look at these categories to further your diversification strategy.

As you can see from the chart above, the indicator peaked at the same level seen in early 2000 which was right before the peak of the tech bubble. The indicator was slightly higher in June 2007. Clearly, these aren’t good comparisons because bear markets soon followed them. The bullish counterpoint is the record positive earnings pre-announcements in Q1 2018 was driven by the tax cuts. Stocks can have a compression in their multiples without a huge crash because earnings are growing quickly. Ultimately, multiples are the measurement of how optimistic investors are, not prices.

As you can see from the chart below, the Goldman Sachs bull/bear market indicator is at 71%, which is in the category associated with high risk of a bear market. 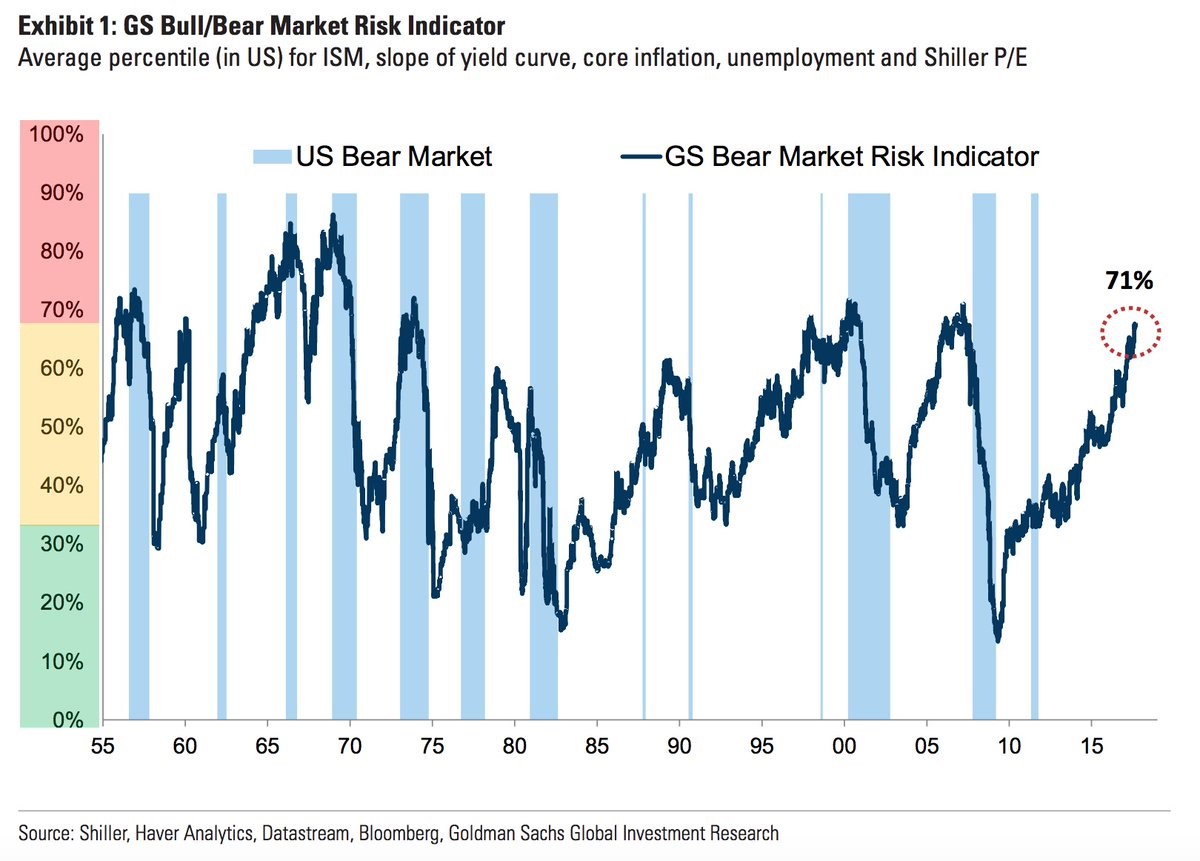 Interestingly, the investment bank states it thinks the risk of a bear market is low because of decent valuations, a strong economy, and because there aren’t financial imbalances. The creator of this index disagrees with its implication, but that doesn’t mean it’s incorrect. It’s debatable if there are financial imbalances. Surely, the corporate and government debt are at elevated levels and the consumer has an extremely low savings rate. If stocks fall and interest rates rise, the imbalances will appear.

Specifically, the indicator is based on the ISM percentile, slope of the yield curve, core inflation, the unemployment rate, and the Shiller PE. Let’s look at them one by one. The non-manufacturing ISM in March 2018 was 58.8 and the manufacturing ISM was 59.3. Both indicators are very strong, but keep in mind they have been overly bullish. The survey data has been better than the actual results, implying you can’t base a bear market call on the ISM reports.

The slope of the yield curve isn’t implying a recession. It is flat, but still normally sloped (not inverted). The negative indicator is triggered when the yield curve starts quickly steepening after a period where it was inverted. Core inflation is at 1.6%, which is below the Fed’s 2% goal, but it is increasing. The faster it increases, the bigger the problem which is why we are watching it closely. The unemployment rate isn’t accurately depicting the relatively high level of slack in the labor market as we discussed here, so it should be ignored. Usually stocks should be avoided when the unemployment rate is low and rising. Finally, the Shiller PE is high which is bearish for long term expected returns, but means little for stocks in the next 6 months.

The good news is you can discount the fact that retail investors were the most bullish ever in early 2018. Those indicators need to be taken with a grain of salt because they are influenced largely by politics. That being said, stocks did reach a speculative peak in 2018. The best way to avoid a bear market is for stocks to decline modestly and earnings growth to be in the high teens as expected. This will bring down the market’s multiple, without having a stock market crash.