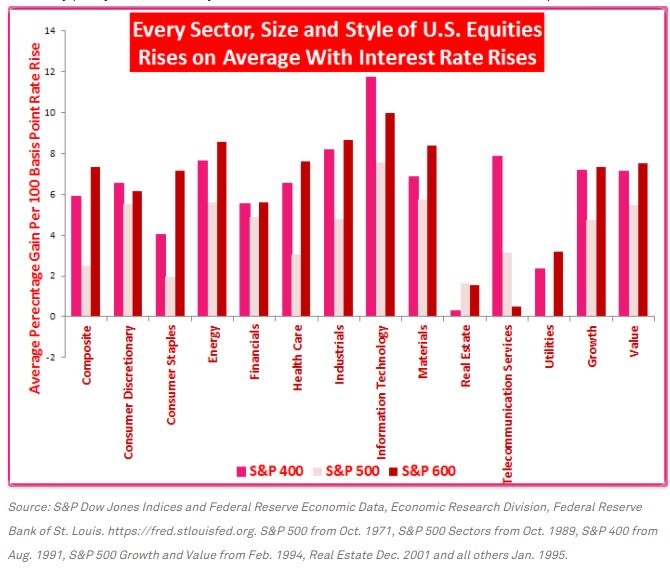 Investors are trying to get a reading on where inflation will go in the next 12 months because it’s a key variable for forecasting asset prices and the Fed funds rate. As you can see from the chart below, the year over year core CPI will hit near 2.5% in late 2018 if the month over month increase is 0.16% in February and 0.19% going forward. 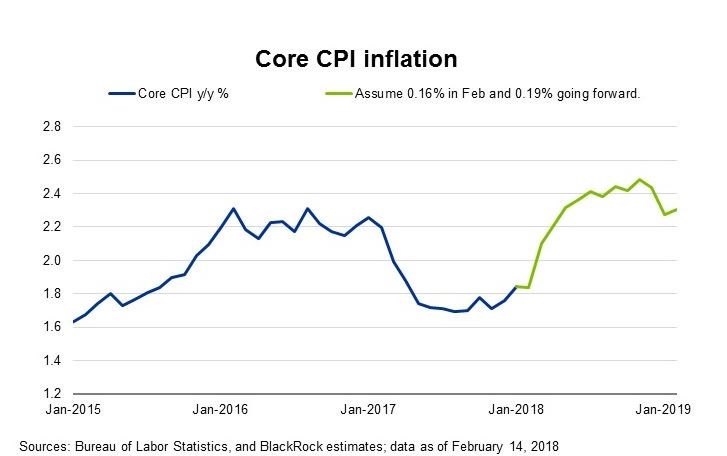 This chart shows the base effects the core CPI will face and is a great argument why the Fed should look at a long term average of inflation before setting policy. For example, if inflation was flat one year, and then up 3% in the next year, the Fed shouldn’t be aggressively hawkish because of a 1.5% average. Therefore, the Fed probably won’t overreact to the future accelerated inflation, just like how it ignored the low inflation in 2017 as it defiantly raised rates saying the trend was transitory.

Misnomer About The Relationship Between The Bond Market And Inflation

The common mainstream narrative is that bond yields increase when inflation picks up. The correction in February was blamed on the average hourly earnings report causing inflation expectations to spike which caused interest rates to increase, which then caused stocks to fall. While it makes sense that bond yields would increase because of inflation to make up for the decline in purchasing power, this hasn’t borne out in the past. The historical data shows bond yields are more likely to reflect past inflation than future inflation. This ruins the narrative that yields react to inflation estimates; the market is supposed to price in future changes, but it hasn’t. The 10 year treasury yield has a 70% correlation with the prior 10 years of inflation. On the other hand, the 10 year treasury yield only has a 28% correlation to the next 10 years of inflation. This analysis was done by Robert Shiller, going back to 1913.

We discussed the historical data on how interest rates and inflation are related. We aren’t denying the obvious which is that the 10 year bond yield has been in a major sell off in the past few months. The media narrative can be correct in the short term, while ignoring long term trends. It’s easy for the media to set a headline which makes sense for the day’s action because it simply looks at the action and extrapolates causation which may or may not exist. If the recent action changes, then the media simply changes the headlines with zero regard for what it just said. For example, there are headlines which show stocks have risen and sold off based on heightened inflation. Make sure to properly vet the narrative or else you will go insane trying to understand why X causes Y one day and causes X causes (-Y) another day. There’s nothing wrong with looking at the near term action, just make sure to avoid confusing correlation with causation.

As you can see from the chart below, the CFTC 10 year treasury futures show traders are very short the market which makes sense because of the recent action. 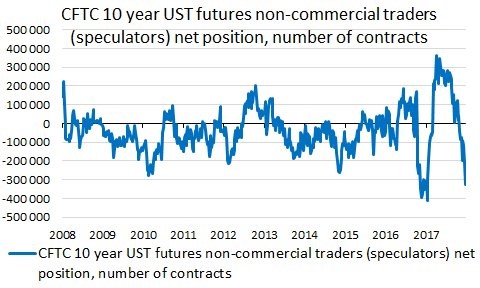 The Short Treasury Trade Is Crowded

In the past three quarters, non commercial traders has gone from a record long position to a near record short position. For context, when the 10 year bond yield went from the record short position early 2017 to the record long position a few months later, the yield went from 2.59% to 2.04%. If the speculative trading activity went from short to long, it wouldn’t necessarily move that much because of the changing supply and demand dynamics, but the yield would fall. Yields aren’t a lock to move up because inflation is going up. There can be a trend correction which would be catalyzed by the short treasury trade getting overcrowded and squeezed out of the position.

The other point which is a misnomer is that rising real yields means stocks will decline. The reason this misnomer exists is because this current cycle has seen massive multiple expansion while real yields have been low. There has been multiple expansion even while GDP growth per capita has been moribund. The narrative that investors have no alternative but to buy stocks when rates are low is a new one because historically multiples have been low when rates are low. It’s quite something to see that since 1930 real yields being low was a negative and now low yields are being blamed for a bubble in stocks. The TINA argument is dubious because bond investors who seek safety probably won’t risk that capital in stocks just because rates are low. There’s a big increase in beta going from treasuries to the S&P 500, which many investors such as retirees aren’t willing to take on. 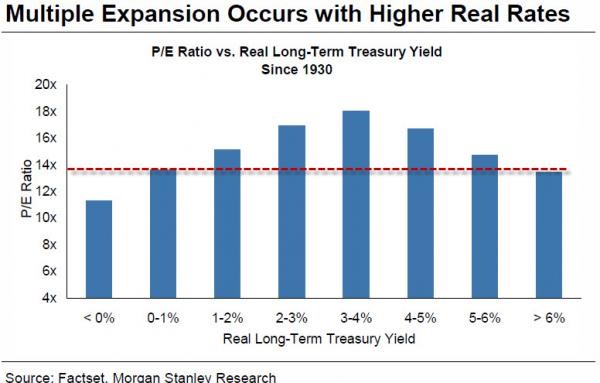 Increasing real yields imply the economy is accelerating which is why multiples expand when they go up. The chart below shows the real yields on 10 year treasuries.

There has been a modest increase in real yields in 2018. The real yield is still far below what it was in the prior business cycle. This latest action shouldn’t get investors hoping for too much of a boost in real GDP growth per capita in the next year. It’s possible the fiscal stimulus leads to inflation instead of real growth because the labor market is relatively tight.

Everything Goes Up When 10 Year Yields Increase

As evidenced in the chart, all sectors have positive returns when interest rates rise. The best group is information technology which is important for this current market because tech is the largest sector. Even real estate and utilities, which don’t like rate increases, have positive returns. Higher yields make real estate more expensive and provide more competition for utility stock investors who like the dividends. This all occurs because growth usually accelerates along with the 10 year bond yield; a selloff in treasuries is a signal of a strong economy.

It’s important to get the correlation and causation with interest rates, inflation, and stocks correct to properly allocate your portfolio. It would be a bummer to make the correct prediction on those variables, but then have a poor allocation which doesn’t take advantage of the correct forecast.