Why Stock Multiples Are So High 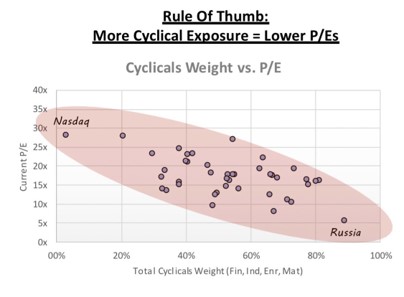 You probably already know one of the most discussed topics on Wall Street is how stocks rallied much more than earnings increased in 2019. This is why the forward PE multiple of the S&P 500 is at 18.6 according to FactSet. As you can see from the chart below, quarterly returns on a year over year basis usually match the quarterly change in S&P 500 operating margins. That wasn’t the case in the last quarterly reading on the right.

Because stocks have inflated PE multiples, analysts don’t have as many buy ratings. The average Russell 1000 share price is above the average analyst price target for the first time since 2004. This is in tune with the low 2020 S&P 500 price targets we mentioned in a previous article. The percentage of buy ratings is inversely correlated with the yearly change in the PE in the next 12 months. Based on the recent rise in multiples, the percentage of buy ratings (by the sell-side) might fall further.

In line with the takeaway from the chart above, an astounding 85% of companies in the S&P 500 had PE multiple expansion. This is the largest percentage since at least 2003. The previous high was 66% in 2012 and 2016. Those were in the prior 2 slowdowns (earnings recessions). The spike occurred partially because in 2018 only 43% of stocks had higher multiples which was the lowest percentage since 2004. Weak earnings and prior year PE contraction helped boost the percentage in 2019.

On the other hand, it appears the multiple gains haven’t been equally distributed. The S&P 500’s forward PE multiple is 18.5, while its equal weighted PE is 16.6 according the Cornerstone Macro. The biggest companies in the index are tech names which are secular growth firms which usually have higher PE multiples.

Any explanation of high PE multiples aims to show why the market is priced this way, not that it will continue. It’s better to understand why the market is being priced a certain way instead of throwing your hands up and saying it’s excessive speculation. For sure, there is excessive speculation as the percentage of stocks in the S&P 500 above their 200 day moving average (87%) is the highest since July 2014. We’ve gone more in depth with this in previous articles. The important questions are why are stocks so expensive and will it continue?

The charts below aim to answer that question. As the one on the left shows, interest rates are low. Interest rates are in the 4th percentile since the mid-1980s. There is an inverse correlation between rates and PE multiples, although, this doesn’t prove causation. Some argue that investors focused on bonds wouldn’t dare to buy stocks because they are riskier even if bonds have low yields and stocks offer much greater potential returns. Many dividend paying stocks have a higher yield than the 10 year yield.

The decline in interest rates is a secular trend. This isn’t a new phenomenon and it might not go away soon because of demographics and low economic growth in domestic markets. Some postulate that bond yields are being lowered by passive investors who sell stocks and buy bonds when stocks rally (to maintain their portfolio’s desired weighting).

The middle chart shows the decline in investment grade credit rate spreads. They are in the 40th percentile since the mid-1980s. This is a cyclical change. If the economy weakens, spreads could widen and lower PE multiples.

The final chart shows there is a low percentage of cyclical stocks. The S&P 500 has never had a lower weighting of cyclical stocks or you can say it never had a higher weighting of growth, stability, and defense stocks. This is called the composition effect. Cyclicals (financials, industrials, materials, and energy) have lower multiples than growth, stability, and defense (technology, communication services, health care, staples, discretionary, utilities, and REITS). If sectors that typically have higher multiples have a higher weighting, the market’s multiple will rise. Obviously, it’s still fair to be bearish if you think the composition will change or if you think the sectors with high PE multiples are too expensive. High multiple stocks had a high weighting in 2000 and that didn’t last long.

Specifically, the energy sector’s weighting as a percentage of the total market is inversely correlated with the S&P 500’s forward PE multiple. Even though America is now a net exporter of oil, better fracking technology didn’t lead to an explosion in profits because greater supply of a commodity means lower prices. The rule of thumb that a lower weighting of cyclical stocks is equal to higher PE multiples works across markets. The America market has a higher PE multiple than Europe’s because America has a higher weighting of tech, while Europe has more financials. The chart below shows this as the tech-intensive Nasdaq has a higher forward multiple than the commodity-focused Russia.

The chart below shows the average management guidance ratio (above consensus versus below consensus) is the lowest in Q1. Keep in mind, this is only guidance for the upcoming quarter, so it’s not showing that firms are more confident about their full year guidance as the year goes on. That’s obvious.

This chart won’t help you beat the market because it should be known that firms are more cautious in Q1. After all, this chart was published by Bank of America and countless major investors have seen it. However, it does help contextualize potential greater than average estimate downswings in Q1 if you are looking at the average estimate decline in all quarters. It also helps if you’re a stock picker trying to figure out why so many of your investments saw lower guidance in Q1.

In this article, we showed multiples are high and why they are high. If you know why they are high, you can know why they might fall. You can’t just throw your hands up and say investors are acting irrationally because there is always motivation for valuations. The expectations and variables valuations are based on can be wrong. That’s when you pounce and make an investment or go short.