How The Heat Affects Economic Data 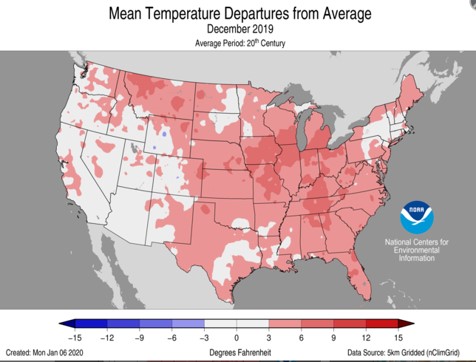 Investors are predisposed to ignore weather as an excuse for bad earnings. However, in some cases highly unusual weather patters impact economic data in a way that must be accepted as a one time event that doesn’t imply a cyclical phase change. The most obvious is during hurricanes motor vehicle sales fall and then in the month following the storm sales increase because cars that were destroyed need to be replaced. This past December was a historically hot month which led to an increase in housing starts and a decrease in utilities production. Before we get to those reports, let’s look at the weather.

As you can see from the map below, most of the country had above average temperatures. That trend was pronounced in the Midwest and the South.

The South is the nation’s largest housing market. That explains the big boost in housing starts. Specifically, this was the 6th warmest December in 125 years. Temperatures were much above average in 9 states, 7 of which are in the South.

A Continuation Of The Industrial Production Slowdown

December industrial production growth met estimates and manufacturing growth beat them, but November’s growth was revised lower. Growth was hurt by motor vehicle and parts production and utilities production (because of the warm weather). As you can see from the chart below, the 3 month weighted average of the percentage of manufacturing sub-sectors contracting fell, but sequentially the percentage rose. Specifically, monthly the percentage of sub-sectors in recession increased from 56.6% to 68.9%. Because September’s reading of 86.6% was no longer in the 3 month average, it fell.

A Breakdown Of Industrial Production

The January Housing Market index fell 1 point to 75 which met estimates. December’s index of 76 was a 20 year high which explains why this slight decline doesn’t imply this was a weak report. It’s interesting to review the underlying numbers because there were some unusual movements in December. Many of them corrected. After the present sales index rose 7 points in December, it fell 3 points to 81. The 6 month expected sales index stayed at 79. The traffic index rose 1 point to 58 which is the highest reading in at least a year.

Housing starts were bolstered by the warm weather in December as we mentioned earlier. Starts increased from 1.375 million to 1.608 million. As you can see from the chart below, this was the 3rd largest positive surprise ever.

This was the most starts since December 2006. On the other hand, don’t think that starts are historically high because of this one report. As you can see from the chart below, 1982 and 1991 are the only 2 years starts were lower than they were in 2019 (prior to 2008). Housing permits fell from 1.474 million to 1.416 million which missed estimates for 1.458 million. Permits usually lead starts, so this implies starts will come back down to Earth. That didn’t stop the Atlanta Fed Nowcast from increasing its Q4 estimate for real residential investment growth from 4.3% to 5.5%.

Starts were up 16.9% monthly. We won’t even mention yearly growth because the comp was very easy. Single family starts were up 11.2% as they were the highest since June 2007. As you can see from the chart below, privately owned 5+ unit structures had starts rise from 406,000 to 536,000 which was the most since July 1986. Apartment demand has increased because of millennials who are moving to cities.

The Case Shiller and FHFA housing price reports only have data as of October. That’s why it’s nice to look at Redfin’s data which now includes December. As you can see from the chart below, yearly home price growth was 6.9% in December which is the highest growth rate in 19 months.

Growth peaked at 9% in February 2018 which led to the housing downturn in 2H 2018. Price growth troughed in February and March of 2019 at 1.5% which helped housing rebound in 2H 2019. This latest increase in price growth might limit demand. The good news is rates have stayed low. Price growth increased because inventory fell 15% from last year. Inventories fell to the lowest level since December 2012. The increase in housing starts in December will increase supply.

The industrial production report was more of the same. The mini-recession/slowdown continued. At least it didn’t get worse. The Empire Fed and Philly Fed reports imply a rebound in January is coming. The housing market is heating up even if you exclude December’s spike in starts. The spike in starts will help real residential investment growth in the Q4 GDP report.