Why Are Stocks So Expensive? 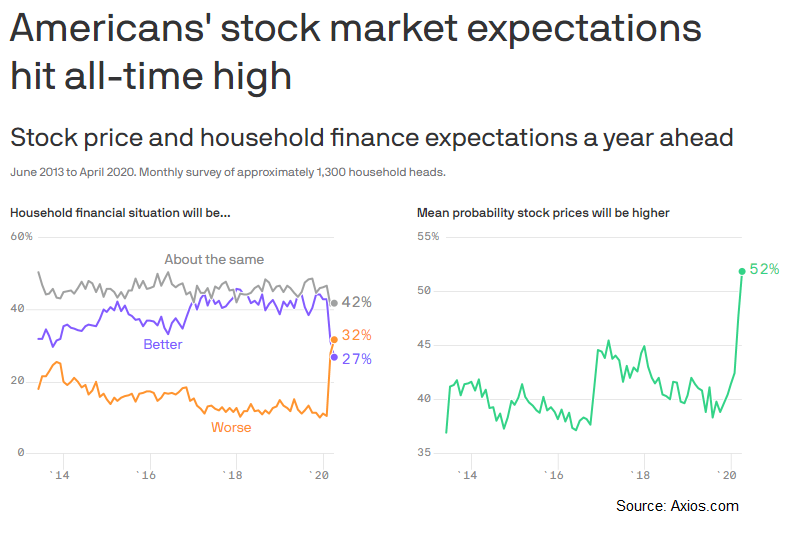 We all know the economy and the stock market are showing extreme dislocation at the moment. The Nasdaq is up year to date, while the unemployment rate is the highest since the Great Depression. We will continue to argue that economic data matters since a high unemployment rate is associated with higher returns on average. When the unemployment rate reached the lowest in decades at the end of the expansion, that was a signal low returns were coming.

Many traders know that stocks are likely to move higher when the unemployment rate is high, but they mix the data with emotions and wonder what should be. It doesn’t matter what should be; it matters what is. This year, the market has gotten ahead of itself more than it usually does. It always prices in the future; it has done so quicker than usual. That opens it up to declines caused by a 2nd wave of COVID-19. However, you can’t expect stocks to be cheap when the COVID-19 risk is gone. That would be giving away free money.

You can’t wait for certainty if you want to make outsized profits. Sometimes it makes sense to wait for more clarity. It all depends on your conviction. Maybe you are researching a stock that has too much risk. As the risk falls and the stock rises it has lower upside, but it might be more attractive because you are comfortable with the newly lowered risk. It’s rare for the risk to be taken out and the stock be lower. In those circumstances, that would make for a good combination.

The jig is up. Americans now know the stock market does well when the economy looks bad, but has the support of fiscal and monetary stimulus along with the potential for a recovery (high unemployment rate). The risk of a retest of the lows has been diminished by the Fed and the government. Maybe Americans don’t really know what’s going on. They might just be looking at the stock market rallying and expecting it to continue. The polls are stark. As you can see in the chart on the left, 32% expect household finances to be in a worse situation a year from now, yet 52% see a higher stock market. Usually, stocks rise, but it’s expected that people would predict stocks to fall with such a bad economy. It’s not a good idea for investors to just follow the momentum without looking at the fundamentals. If you’re buying stocks just because they are up, you’re doing investing wrong.

The current consensus estimate for 2021 EPS is $166.03. With the S&P 500 at 2,870.12, it has a 17.3 PE multiple. That’s not cheap for a very uncertain period. We are experiencing fake certainty in that the Fed and the government are preventing much of the damage to the economy caused by the shutdown. That doesn’t mean it doesn’t exist. We don’t know how long this period will last and if the measures will create unintended consequences. We’re not saying the Fed or the government will step off the gas pedal or that inflation will be created. We’re only saying this isn’t a normal situation. The Democrats are proposing the extension of the $600 extra weekly money for unemployment insurance to January. That would be getting the job done early as it currently extends through July.

To support our point about uncertainty lowering valuations, we have the chart below. As you can see, when the S&P 500 has a high earnings dispersion, PE multiples have been lower on average since 1995. When the dispersion is 15% to 20%, the average PE multiple is 13.6. There is record uncertainty, yet stocks are being priced for certainty. As you see, the forward PE multiple was 20.3 when this chart was made. As we mentioned, the market has priced in a recovery much quicker than it usually does. That makes it at risk for a correction if something negative on the COVID-19 front occurs.

Multiples are generally high even if you ignore the uncertainty. This might be because of lower rates, Fed stimulus, low inflation, and a shift towards quality. Tech companies with secular growth stories that are even outperforming cyclically are dominating the market. Before the bear market, some investors were arguing for a higher multiple based on the increase in tech and the decrease in energy as a portion of the S&P 500.

As you can see from the chart below, the movement of state and pension funds towards equities and away from fixed income may have boosted multiples.

We are discussing long and short term reasons for elevated multiples because the multiple was high before the bear market and it’s currently high. Hopefully, you didn’t miss buying the bottom in stock because of valuation concerns. We will also point out that it’s possible the current market shouldn’t be this high. Sometimes emotions provide dislocation like what happened on the negative side in late March.

The April BLS report and now the April small business sentiment report are a painful dose of reality. The sentiment index fell from 96.4 to 90.9 which beat estimates for 84.8. The index didn’t fall further because expectations for the economy to improve rose 24 points to a net 29%. The rest of the data points are the painful current reality. Earnings trends fell 14 points to -20% & expectations for real sales to be higher fell 30 points to -42%. Small firms see the economy improving, but they don’t see their sales getting better. Let’s ignore their macro outlook and only focus on what they know about: their own sales. That’s why we say this report is basically as bad as it gets sequentially. The overall index is about 10 points higher than the bottom during last recession.

The economy is terrible, but Americans see stocks moving higher, so they expect that to continue. Druckenmiller sees the uncertainty in earnings and the high valuations which is why he said the risk reward for equities is the worst he’s seen. He stated, “The consensus out there seems to be: ‘Don’t worry, the Fed has your back. There’s only one problem with that: our analysis says it’s not true.” Furthermore, he doesn’t see a V-shaped recovery. Reality is here in the NFIB small business sentiment report as business is terrible. The only thing keeping the index up is optimism on the future economy.