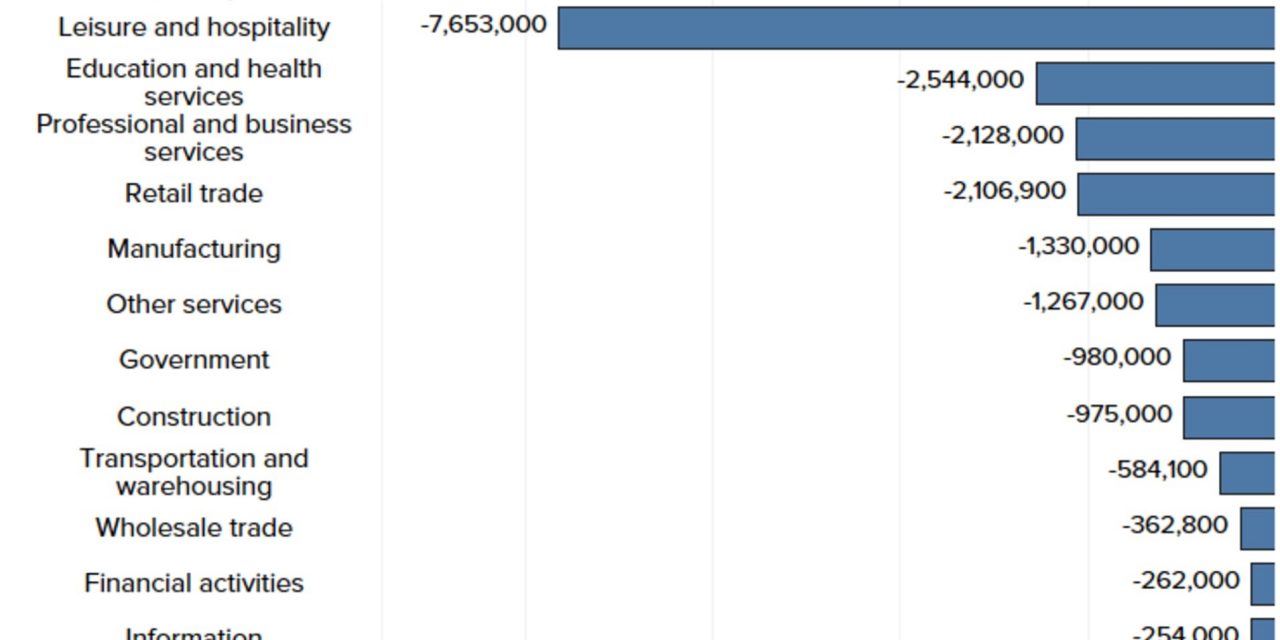 The April labor report was the worst ever. As a preview to what we will discuss, let’s look at a quote from the Senior Vice President of Challenger. There were 671,129 job cut announcements in April which was the most ever. The data starts in 1993. The previous record was 248,475 in January 2002, meaning this April report was 170% higher than the most ever. The Senior VP stated, “No doubt employers have every intention of bringing back workers once the immediate crisis passes, but the indefinite nature of this pandemic coupled with the fact that we’re seeing recession- or even depression-level economic data means the vast majority of these jobs will not return any time soon.”

The labor market is promising if you go with the assumption that many people will get their jobs back. As you can see from the chart below, 78.3% of workers were furloughed in April.

Most unemployed people are receiving good benefits and most employers want to bring their workers back. It sounds simple, but it’s actually difficult because once the shutdowns end, demand doesn’t come roaring back. Business as usual will be changed for many months which means this glimmer of hope is only the best case scenario, not what will probably happen.

There were 20.5 million jobs lost in April which was the most ever by a landslide. For comparison’s sake, the previous worst decline ever was 1.959 million in 1945. The labor market is bigger now, but not 10 times bigger (4.8% decline in September 1945 & 13.5% decline in April 2020). Furthermore, there were 9 million jobs lost in 2 years during the great financial crisis. The only good news is there probably will be fewer job losses in May because initial jobless claims fell.

As we mentioned, the number of underemployed people skyrocketed. The U-6 rate increased 14.1% to 22.8% which is the highest reading ever. This data only goes back to 1994. However, since the U-3 rate is the highest since the Great Depression, we’d say it’s likely this rate is the highest since then as well. The labor force participation rate fell to 60.2% which was a 2.5% decline. As you can see from the chart above, this is the lowest rate since 1973. On the one hand, it is being pulled lower by demographics. On the other hand, this is the worst decline ever by far. The previous worst monthly decline was 0.7%. Put simply, this metric rarely moves much.

The scary aspect of this report is many older people won’t get their jobs back. They either won’t want to get sick or they will be passed over by employers. This was a sad ending for many baby boom workers. Of course, the majority of workers who lost their jobs were younger people since they make up the bulk of the labor force. The prime age labor force participation rate fell from 82.6% to 79.9% which is the worst point since May 1983. The unemployment rate for those 20-24 years old is 25.7% which is the highest ever by far. The previous record going back to 1948 is 17.2%.

Because less educated people and the lowest paid industry lost the most jobs (these go hand in hand), wage growth spiked. Wage growth was 4.7%. It’s not that higher paid people are getting raises; it’s that there are so few lower paid workers. The unemployment rate for those without a high school diploma (25 years old and older) is 21.2%, while the unemployment rate for those with a bachelor’s degree (25 & older) is 8.4%. While the latter rate sounds relatively low, this is a watershed moment. The prior 2 recessions showed getting a college degree insulated people from job loss. Their unemployment rate only peaked at 5% in 2009 & 2010. That’s only about a 3 point rise from before the recession. This is the first recession in history where the well-educated are getting hit hard

As you can see from the chart below, the leisure and hospitality industry lost 7.653 million jobs. Obviously, just because this industry pays workers less doesn’t make these jobs less important to the people who have them. In the prior few months, critics were saying the jobs created in this industry were the most susceptible to being lost. We disagreed based on historical data. The only reason their assertion ended up being correct was because there was a pandemic that shut down restaurants and travel. Normally, that assertion would be wrong.

Heading into this recession, we said healthcare being a larger portion of the workforce made it less cyclical. It took a pandemic causing hospitals to be in dire shape for our claim to not work out. Education and health services lost 2.544 million jobs. Information only lost 254,000 jobs. That’s the best paying industry for production and non-supervisory workers. It hadn’t created many jobs in the past few years, but it didn’t lose many of those jobs either which is a positive. ServiceNow, which has 11,000 workers, committed to no layoffs.

This was the worst labor report ever by many metrics. It’s tough to say if the unemployment rate will get above the Great Depression peak because so many people aren’t being counted in the labor force anymore. We know the unemployment rate will rise in May, but there won’t be as many job losses based on the initial jobless claims data. Plus, it’s statistically implausible for that many people to lose their jobs again. The most vulnerable people lost their jobs. The unemployment rate for the young, those without a high school degree, and those in the leisure and hospitality industry is outlandishly high. Those with a college degree are hurting. It’s not devastation, but it’s the first time this group had this much pain. Usually, they are immune to recessions.