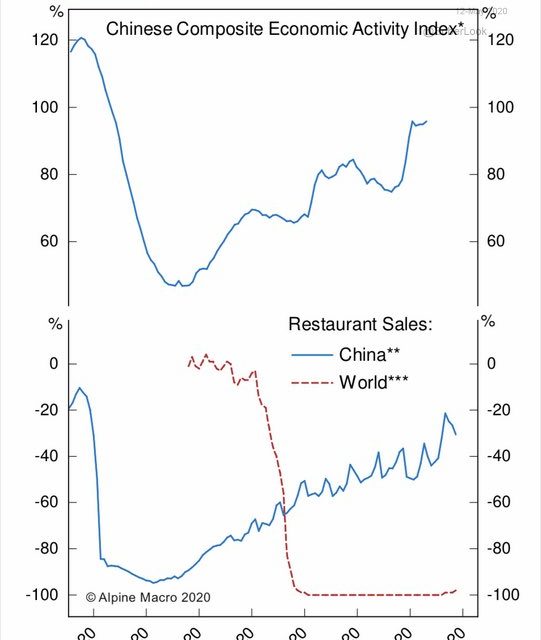 Some traders blamed Powell’s statements for the stock market’s decline on Wednesday, but that doesn’t make much sense because when Powell is negative it signals there will be more stimulus for longer. It’s better for policymakers to overreact to the crisis than under react. To be clear, that’s not the same when it comes to shutdowns. If policy makers shutdown the economy longer than necessary, it’s a big negative for the economy. Our earlier statement was in regards to fiscal stimulus.

Powell stated that almost 40% of households making less than $40,000 per year lost a job in March. That means the added $1,200 payment and extending the $600 weekly unemployment insurance checks through January are vital (Democratic proposals). We’re in a very unusual situation in which the working poor and lower middle class got hit so hard they are being helped enough to be in better shape than normal. It’s better to lose your job in a recession than an expansion. This is like how if you lose $10,000 in your trading account it’s your problem, but if you lose $10 million in a margin account, it’s the brokerage firm’s problem.

The table below reinforces the stat Powell gave.

From March to April, the percentage of people working full time fell from 43.8% to 35.1%. The percentage of people working part time for economic reasons rose from 2.2% to 4.1%. 63.9% of the people who were working part time for economic reasons in April had been working full time in March. People who were in good shape are now desperately clinging to any job they can get. There may have been more of this if jobless benefits weren’t expanded.

In Powell’s speech, he stated, “While the economic response has been both timely and appropriately large, it may not be the final chapter, given that the path ahead is both highly uncertain and subject to significant downside risks.” For those who criticize the Fed for only pandering to the stock market, clearly Powell is concerned with the general welfare of the people. If he was only worried about stocks, he wouldn’t have gone with such a dire tone. He stated the job losses have caused “a level of pain that is hard to capture in words.” According to ING, the unemployment rate will increase to the low 20s in May which is slightly below the Great Depression peak, but still very bad.

The Data Is Improving

The economic data is improving when you zoom in on the latest results. For example, in the week of May 9th, Redbook same store sales growth rose from -9.3% to -7.5%. On May 12th, OpenTable’s yearly bookings growth was -95.62% which is an improvement from the 100% decline in April. Growth is up 4 days in a row. According to Womply, restaurant same store sales growth was -74% on May 9th. That’s off the low of -85%, but still very weak. According to homebase, yearly growth in employees working, locations open, and hours worked were -44%, -36%, and -46%. They are all in a steady uptrend with declines related to weekends.

Mastercard updated us on its results from the last week of April and the first week of May because this situation is so volatile. Spending is falling at a slower rate. As you can see, switched volumes in America went from down 15% in in the 3rd week of April to down 6% in the first week of May. That’s the aggregate spending using Mastercard’s technology. Similarly, global transactions went from falling 20% to falling 12% in that period. Global switched volume outside of America improved by less was it went from down 25% to down 19%. Mastercard doesn’t have a major presence in China which is the country leading the charge in terms of returning to economic normalcy (if it did, global growth ex-US would be stronger).

Deflation occurred in April at least on a monthly basis. Monthly headline prices were down 0.8% and monthly core prices fell 0.4%. That core decline was the biggest ever going back to 1957. Specifically, it was -0.45% which was a much greater than the previous largest decline of 0.33% in July 1960. Yearly headline inflation was 0.3% as energy prices crushed the rate. Core CPI was 1.4% which was the lowest rate since April 2011.

As the chart below shows core goods inflation was weak, but it has been weak for most of the past few years.

Medical care services inflation, which had been very high before this recession, increased from 5.5% to 5.8% which is the highest rate since December 2007. This is the 4th highest reading in the past 20 years. The highest was 5.9%. The comp in May will be 0.5% higher which means we need a very big price increase to get it to the highest inflation in over 20 years.

Powell was negative on the economy as you’d expect considering this would be a destabilizing recession with lasting consequences if it wasn’t for the government and the Fed. Many people working part time for economic reasons in April were working full time in March. The good news is the latest economic data is showing improvement. April CPI showed deflation on a monthly basis. The main groups that strayed from the headline reading were food at home and medical care services.