Where Is The Economy Headed In The Next 6 Months? 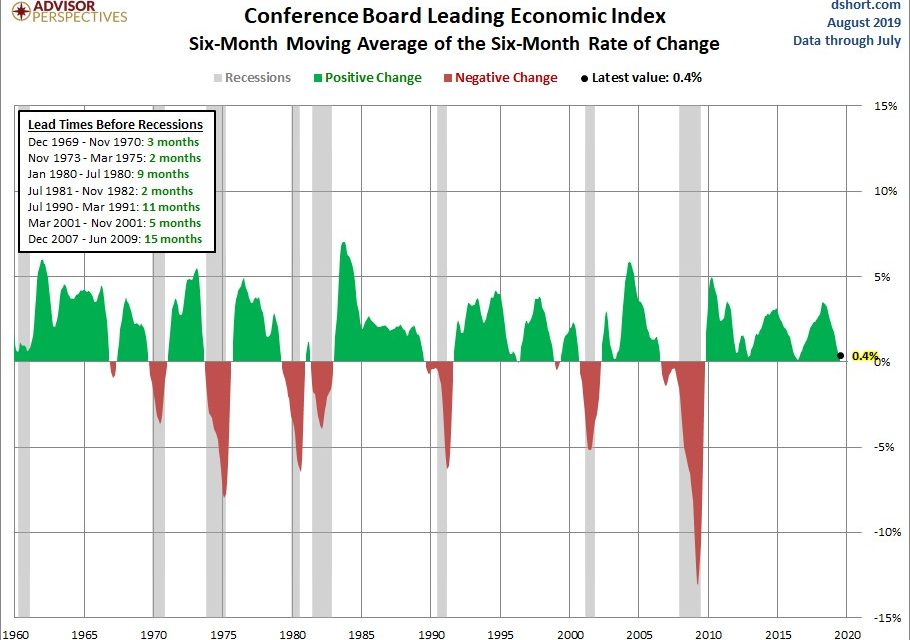 The concept of being due for a recession only works if there is excessive leverage. Just because it seems like the U.S. economy needs to have a recession because it hasn’t had one in over a decade doesn’t mean much. Many investors have a bias towards expecting a recession soon because this cycle has been long. Investing experience can be a good thing, but it can also be a hindrance.

The timing of your investment career can cause biases. If you’ve invested for about 20 years, you’ve seen two S&P 500 declines of over 50%. Some use their experience of recessions over certain intervals to suggest one is coming and scoff at those who have never seen one. The problem with scoffing at those who haven’t invested through the last big recession is that those who have done so are negatively biased and those who haven’t are positively biased. In a way, they are equal. The only advantage is good analysis which can be done by novices and veterans.

The best ways to determine if the economy is due for a recession is to look at inflation and leverage. The table below isn’t the best type of analysis, but it’s superior to just looking at the length of the cycle.

Even though this cycle is 2 months longer than the longest one since the 1800s (and still going), cumulative real growth is the 4th highest since 1945. It has the lowest annualized real GDP growth rate.

Uncertainty is difficult to quantify, but is very important. Every new investment a business makes is a risk. If a business is concerned about a project, it will cancel it if the economic climate is uncertain. Both US and global policy are uncertain. The trade war and 2020 election in America bring lots of uncertainty. Brexit and Hong Kong protests bring global uncertainty.

As you can see from the chart below, global economic policy uncertainty has been high this year.

This index is based on the number of news stories related to economic uncertainty, the number of Federal tax provisions set to expire soon, and the relative disagreement among economic forecasters. A high level of uncertainty can create issues in a slowing economy. There is elevated risk of policy error. The Fed needs to react to all these changes which is difficult. Plus, the U.S. government’s potential new policies can be a mistake.

The ECRI leading index did a great job of predicting the current slowdown in nominal GDP growth. The chart below shows in late 2018 and early 2019, the ECRI leading index’s yearly growth was very low. It predicts economic growth 2-3 quarters ahead of time.

The latest growth rate is -2.1%. That’s down from -1.3% in the previous week. Later in the year, the index will face very easy comparisons. An increase in yearly growth doesn’t necessarily mean 2020 will be a fantastic year. The index is at 143.1 which is well off its record high in the low 150s which it hit in early 2018 when stocks were topping. The ECRI coincident index has slowly seen a decline in yearly growth as it has gone from 2.4% in April to 1.9% in July. We’re interested to see if it falls below 1% which was about the trough in the 2015-2016 slowdown.

The Conference Board leading economic indicators index was relatively solid in July, but the moving average still shows weak growth. Specifically, the July index had 0.5% monthly growth which beat estimates for 0.2% and hit a record high. The June index was revised from -0.3% to -0.1%. There hasn’t been a recession with the leading index at its record high since at least 1959. The last 3 cycles had peaks an average of 15.7 months before recessions. The 12 month moving average of the 12 month rate of change fell to 3.6% growth. The prior 2 slowdowns had growth fall below 2%.

The chart below is more ominous. The more recent data shows worse growth.

The 6 month moving average of the 6 month rate of change has just 0.4% growth. It’s not the cycle low, but it’s very close. The false recession indicators showed mild declines. When the indicator has been correct, it has led recessions by an average of 6.7 months in the past 7 cycles. The recession warning could be triggered in the next few months.

We mentioned the negative revision to GDP growth from 2018 to 2019 which has transformed our thinking of the benefits of the tax cuts. Now let’s look at the revisions to corporate profits. The first thing that comes to mind is how high profits are, but that’s the S&P 500’s EPS. The situation is different for total profits.

U.S. corporate profits haven’t surpassed their Q3 2014 peak. The revision has dramatically changed the data. It went from looking like a continuous uptrend to a plateau. Profit margins have normalized. The margin of 9.9% in Q2 2019 is just above the long run average.

The increase at the end of the chart shows there was 2.7% yearly growth in Q2 2019. Of the $106 billion in profit growth, $58 billion was from international business. That could be a problem because the global economy looks weak. As you can see from the chart below, just 30% of global PMIs are above 50. That implies MSCI AC world earnings will fall.

The U.S. economy isn’t due for a recession based on the length of this expansion. The leading indicators don’t forecast a recession yet, but that can change if there are a couple of bad readings from the Conference Board index. Uncertainty and corporate profits are an issue. Corporate profit growth was helped by international profits in Q2, but that likely won’t continue based on the global PMI data. The recent revisions to corporate profits show they have greatly diverged from the S&P 500’s EPS. That might be because larger companies have been beating out smaller ones over the past couple decades. Many industries have become more centralized.