When Will Stocks & The Economy Recover? 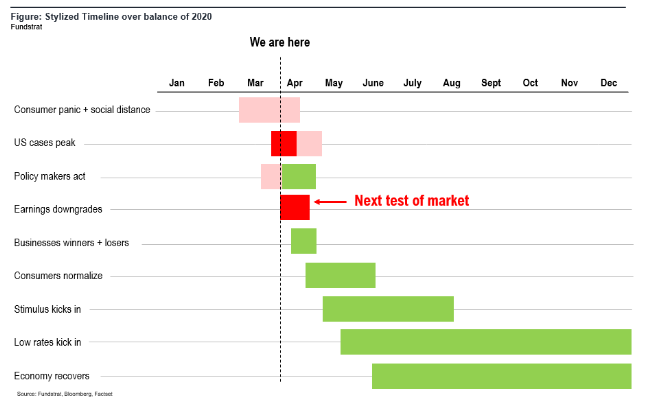 It’s very common when stocks are falling to hear the advice, “don’t try to catch a falling knife.” However, at the beginning of each bull market, gains are realized the quickest. It’s very difficult to buy when stocks are rallying because you don’t know if it’s a bear market rally or a bull market rally. If you invested $10,000 in the S&P 500 on March 9th, 2009 and sold on February 19th, 2020, you would have $63,000 (including dividends). If you bought 3 months after the March 2009 low, you would only have $45,000. This current bear market speeds things up dramatically because it was the quickest ever. If it takes half the length of the bear market for stocks to recover half their losses as it typically does, the S&P 500 could be at 2,800 in 3 weeks (not a prediction). It’s very difficult to time bottoms, which is why valuations come in handy. If you buy where you’re comfortable, you won’t panic at the first sign of weakness.

We think there’s a difference between buying a stock that’s cratering on its own versus buying an index that’s cratering or buying a stock that’s down because of the index’s crash. That’s because when the whole market panics, there are stocks that fall even though they will only experience temporary weakness in their businesses. However, when a specific stock falls because of an impact to its sector or its individual fundamentals, it’s pricing in something that will directly hurt it. Not catching a falling knife makes sense if a negative factor hurts a company’s long term prospects because it doesn’t become cheaper in that scenario. It’s just pricing in the news. On the other hand, if a stock craters with the market, catching a falling knife makes sense if you’re buying undamaged goods and your time horizon is appropriate. Even Netflix, which appears to be helped by this shutdown, saw its stock crater 22.6% in the beginning of this bear market.

The chart below is an opinion of where the market and economy are headed. We aren’t endorsing it. We think it’s valuable to put forth research to start discussions.

It’s quite easy to see that if U.S. cases peak within the next few weeks, that’s bullish, but clearly that’s a big “if.” The cases could come back after the economy reopens. That’s why everyone is watching Italy closely. We will need to wait a bit longer because there are reports that Italy’s shutdown will last until May 4th. If Italy reopens on May 4th, that would be about 6 weeks since its peak in the number of daily new cases on March 21st. America hasn’t even hit its peak which means it could take over 6 weeks for it to reopen. We disagree with the timeline showing the stimulus will kick in starting in May. People will be getting unemployment benefits with an extra $600 per week starting in early April. Remember, this isn’t a stimulus; it’s a lifeline.

The chart above shows earnings season is the next test markets face. We disagree with that because investors already know Q1 wasn’t great and that Q2 will be worse. Any numbers and comments that can help investors model this year will lower the uncertainty. Obviously, not all stocks will rally after they report. The key is when everyone expects bad news, that leaves few sellers when the bad news happens. That’s why stocks didn’t decline after the spike in jobless claims. Stocks have so far not reacted to the extending of social distancing recommendations until April 30th. The economy can’t resume with a pandemic in place.

The chart below shows Goldman’s forecast for S&P 500 EPS each quarter. The firm expects losses in Q2 which is way below estimates. If its Q1 prediction is right, then we will see the rare time when estimates are missed because they won’t be cut that much by the time earnings season starts in 2 weeks.

Stock Buybacks Are Being Cut

Stock buybacks are being cut quickly. Once again, we see the flexibility buybacks provide. Firms shouldn’t risk liquidity to buyback stock. Goldman estimates firms have removed $190 billion in buybacks in the past 2 weeks which is 25% of the 2019 total. Let’s see how well stocks can do without their biggest source of demand. It clearly was a mistake to take out leverage to buyback shares. As you can see from the chart below, firms that have taken out leverage to fund buybacks have seen their stocks dramatically underperform the S&P 500.

A fallen angel is a company that is downgraded from investment grade to junk. Interestingly, potential fallen angels have seen their spreads nearly mimic high yield bonds. Investors know their time is up (spreads 930 basis points for potential fallen angels & 1,025 for high yield). There are expectations for upwards of $250 to $300 billion in fallen angels this year. The top chart below shows JP Morgan sees $215 billion which is a record high in nominal terms. It is 3.7% of the investment grade market which is the same percentage as 2009. Moody’s expects global speculative grade default rates to increase to 6.8% in a sharp short recession. It expects them to increase to 16.1% in a 2008-like scenario and 20.8% in a severe recession.

We showed a potential pathway stocks and the economy could follow while disagreeing with the most dubious projections. The big uncertainties are when the economy will reopen and if COVID-19 will return after it does so. Q1 earnings season will be weak and Q2 earnings will potentially be nonexistent. Expectations are quite low even though the bottom’s up estimates are still way too high. Notice how estimates fell in the past week while stocks rose. Usually, estimates are in sync with stocks, but this time stocks saw the decline in earnings coming before analysts could even think to update their models. Firms that took on leverage to buyback stock saw their stocks crash. Fallen angels are the most prominent since 2009. The market already priced this in by giving these potential firms a steep increase in borrowing costs. The market was ahead of the ratings agencies even though they moved quicker than they ever have.