$22 Trillion U.S. Economy Could Fall To Just Above $12 Trillion 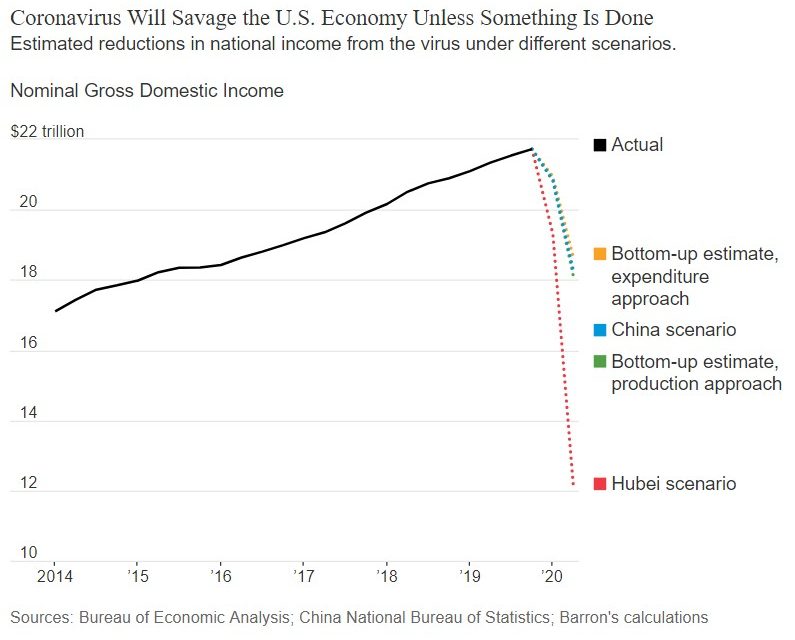 Restaurants are in complete turmoil because they are places were people gather together. Gathering together is against CDC guidelines (until April 30th) so most have had to close. On OpenTable, bookings have been down 100% yearly in America for 9 straight days (21st to 29th) and they are down 100% globally. The industry has already lost 3 million jobs and $25 billion in sales since March 1st. That’s 3 weeks of data. This industry employs 10% of the U.S. workforce which means there will be more devastating spikes in initial jobless claims.

Details On Impacts On Small Businesses

Let’s go through some more details on the Homebase small business survey which took place from March 18th to the 20th. We mentioned this report in a previous article. In this survey, 3% of respondents had 1 to 5 employees. 29% had 26 to 50 employees. As you can see from the chart below, only 3% of firms had no impact from COVID-19. 44% were shutdown and 56% saw a decline in sales or traffic. In other words, the 2/3rds that weren’t forced to close saw a decline in sales.

The good news is only 1% plan to permanently shut down. The bad news is everything might not go according to plans. The other good thing is government guaranteed loans are coming. The bill Congress just passed includes $350 billion in money for small firms. The paycheck protection loan is like a loan that transfers into a grant. Firms with fewer than 500 workers give their expenses for the past 8 weeks. Of the money small firms borrowed, there will be forgiveness of payrolls, utilities, rent, and interest on mortgage debt. There are more people working from home, but hourly workers can’t always do that. In fact, in this survey, 94% said they can’t do their job from home.

In a previous article, we mentioned that the unemployment rate could double in April. Now we say it could get to double digits after only increasing marginally from the current 3.5% (as of February) in the March report. 3.283 million people filed for unemployment claims in the last report. This Thursday’s report could be higher. There were only 5.787 million unemployed people in total in February. There will be way more than that number of claims in 2 weeks. That’s a more than doubling of the unemployment rate in 2 weeks. The April unemployment report isn’t until the week of the 12th. There is time for a further increase.

As you can see from the chart below, the number of 311 unemployment insurance calls in NYC more than doubled in the past week compared to the prior week. These numbers come out on April 2nd.

The final reading of the consumer sentiment report showed sentiment fell from 101 in February to 89.1 in March. That final reading was down from the preliminary reading of 95.9. This was the 4th largest monthly decline ever (almost 50 years). The news is actually worse than that. As you can see from the chart below, the 7 day average crashed throughout the month. If it stays where it is now in April, the sentiment index will be down another 18.2 points for a 30.1 decline in 2 months which would be the worst decline ever. It will be in the low 60s if it stabilizes.

Obviously, it can get even worse if the shutdowns keep going. If the end is in sight, consumers will be more confident. In this March report, the current conditions index fell 9.7% monthly and the expectations index fell 13.5%.

The Hubei Scenario Is Very Bad

We don’t want to inspire fear, but if the U.S. economy faces the same fate as Hubei, this will be a disaster worse than the Great Depression. Employment could fall 30%. As you can see from the chart below, the nearly $22 trillion U.S. economy could fall to just above $12 trillion. The bottom up expenditure, bottom up production, and China scenarios are all far better. Of course, there also can be a cure found within the next few couple months which would eliminate the worst possible scenarios.

The selling you saw in stocks was from active managers. Passive investors mostly stayed the course. More Vanguard clients moved to equities (70%) and older richer clients moved to bonds. 8.3% of households made trades from February 19th to March 20th which is about double the normal percentage. That’s still quite low. Over 90% stayed the course. Passive investors bought the dips and made few trades rather than trying to time the market which is a bad idea if you don’t follow markets closely and don’t have time to do research.

As you can see from the chart below, 65% of the households that traded made 1 trade (probably buying the dip). Passive traders aren’t panicking. On the other hand, if they lose their jobs, they won’t be able to contribute to their investment accounts. Plus, Congress is now allowing people to take up to $100,000 from their 401ks penalty free. That could lead to some selling.

Restaurants and small businesses are in bad shape. The no interest loans that can turn into grants can’t come soon enough. The unemployment rate is set to rise above 10% in the next couple of reports (not March). 30% of the labor force will be gone if America follows Hubei trajectory. To be clear, that’s an unlikely worst case scenario. Passive investors didn’t sell during the crash. The few that made trades bought. This is consistent with past bear markets, so don’t expect this to change.