What Is The Manufacturing Sector Doing? Making Sense Of Mixed Data 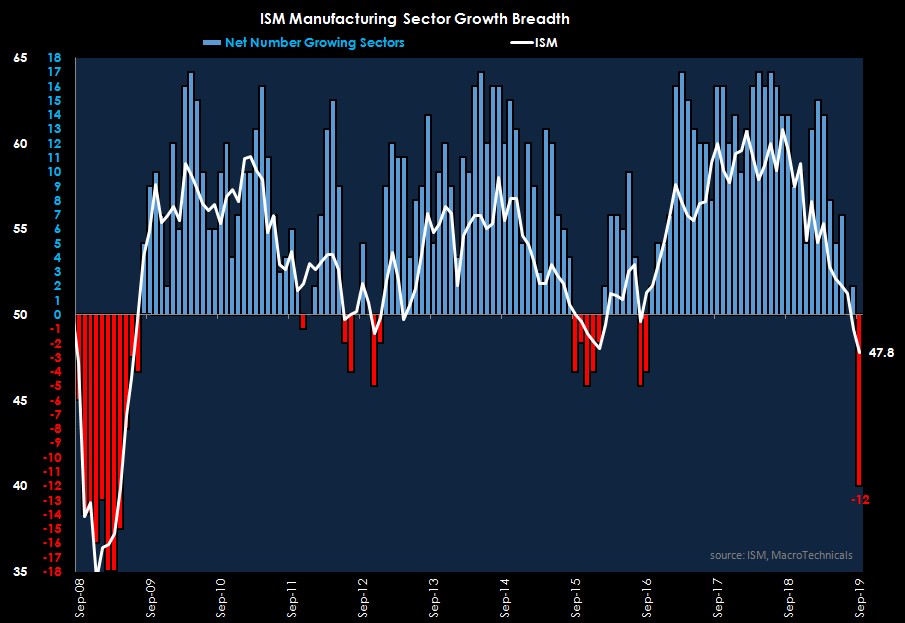 There was a big divergence in the September manufacturing PMIs from Markit and ISM. The Markit ISM PMI drove stocks higher on Tuesday morning, but then they lost all those gains and more after the weak ISM PMI. The Markit PMI was a 5 month high and the ISM PMI was the lowest reading since June 2009. To be clear, it’s not as if the Markit PMI was great; it just showed modest improvement. Its quarterly average was the lowest since Q3 2009 and the comment section stated the manufacturing sector is still in a recession. The September PMI was a modest improvement in a rough quarter. Its monthly reading looks great compared to the sharp decrease in the ISM PMI.

It’s not surprising that the market followed the ISM PMI closer because that’s what it has historically done. However, that doesn’t mean it’s more accurate. The Markit PMI actually has about twice the sample size as the ISM PMI. The ISM report has a small sample size which means you shouldn’t change your macro view based on one reading. It was probably too optimistic in 2018 and now it’s more pessimistic than the Markit report and the average of the regional Fed readings.

The ISM reading is an average of its 5 components which are new orders, production, deliveries, inventories, and employment. Markit gives a higher weighting to production and new orders and a smaller weight to inventories and deliveries. Since the ISM inventories index fell 3 points to 46.9, it definitely played a role in its relative weakness.

The Markit PMI wasn’t strong at all; it was just much better than the ISM reading. As you can see in the chart below, the PMI increased from 50.3 to 51.1 making it 0.1 above its flash reading. That means the 2nd half of the month was slightly stronger than the first half.

One good aspect of this report is the 1 year production expectations index hit a 3 month high. However, it’s still relatively weak. Just like the ISM report, input buying fell for the 3rd straight month because weak demand is causing firms to buy less inventory. The only difference here is Markit gives this change less of a weighting in its overall index. Just like in the improved Chinese manufacturing PMI, new order acceleration was catalyzed by domestic demand. Export sales still fell.

As we have discussed in this article, the ISM manufacturing PMI was weak and disappointing. It went from an okay reading to a weak one. The next step is terrible, i.e. recessionary. Specifically, the PMI fell from 49.1 to 47.8. Expectations were for a modest rebound as the consensus was 50 and the low end of the range was 49.1. In other words, no one saw this decline coming. It is way below the 12 month average of 53.5.

The good news is anything above 42.9 is consistent with an expansion, so it’s still not recessionary. It is consistent with 1.5% GDP growth. That’s not far off from the consensus which is 1.9%. Merrill Lynch lowered its Q3 growth estimate by 0.1% to 1.8% because of this report. This is only a sentiment report which means it has no effect on GDP. As you can see from the chart below, based on the ISM PMI there is a 23% chance of a recession. That’s the highest of this expansion by a slight amount.

As you can see from the chart below, the weakness was widespread as there were 15 sectors in decline and 3 sectors growing. That’s a net -12 which is the weakest reading by far since the financial crisis.

This makes sense because this manufacturing slowdown is less acute than the one in 2015-2016 because oil didn’t crash, but larger in scope because of the trade war and global cyclical decline.

The new orders index actually increased 0.1 to 47.3. That’s not what you’d expect in a manufacturing recession. This index is more heavily weighted in the Markit PMI, explaining why its PMI was higher. The production index fell 2.2 points to 47.3 which put it at its lowest reading since April 2009. The index needs to be above 51.7 to be consistent with industrial production growth. Unless this reading is way off, industrial production growth will be negative again. The employment index fell 1.1 to 46.3 which was the lowest since January 2016. The index needs to be above 50.8 for the manufacturing sector to show positive job creation in the BLS report. At least the manufacturing sector isn’t a big job creator. Healthcare has been driving job creation lately.

The part of this report that drew the most attention is the new export orders index which fell 2.3 points to 41. This index usually is ahead of the overall index which means it will plummet if export orders are correct. As you can see from the chart below, export orders aren’t in line with global PMIs as the percentage of global PMIs in expansion increased. That could be because the trade war is hurting the US more than other countries.

Either U.S. exports are about to crash 10% to 15% or this index is too negative. Maybe the trade war scared firms more than it actually hurt business. 3 of 10 firms in the comment section mentioned the trade war. The comments on the auto industry and the electrical equipment, appliances & components segment were exactly in line with the August durable goods orders report.

As you can see from the chart below, the 3.7 point increase in the prices paid index to 49.7 was rare in relation to the decline in the overall PMI index. Don’t be concerned with stagflation as the PMI is still below 50. It’s just an odd monthly change.

The Markit PMI was worse than the ISM PMI earlier in the year. The latest readings are a role reversal. As much has been made about the ISM report, it’s important not to overreact. We knew there was a manufacturing slowdown before this report came out. This PMI was simply below expectations. It could be because the PMI is slightly too negative just like it was too positive in 2018. If it was slightly higher, the trend wouldn’t change. However, stocks wouldn’t have fallen if it was a couple points higher. The weakness in the PMIs highlight the importance of the trade negotiations with China next week.