If This Continues Stocks Will Fall In October 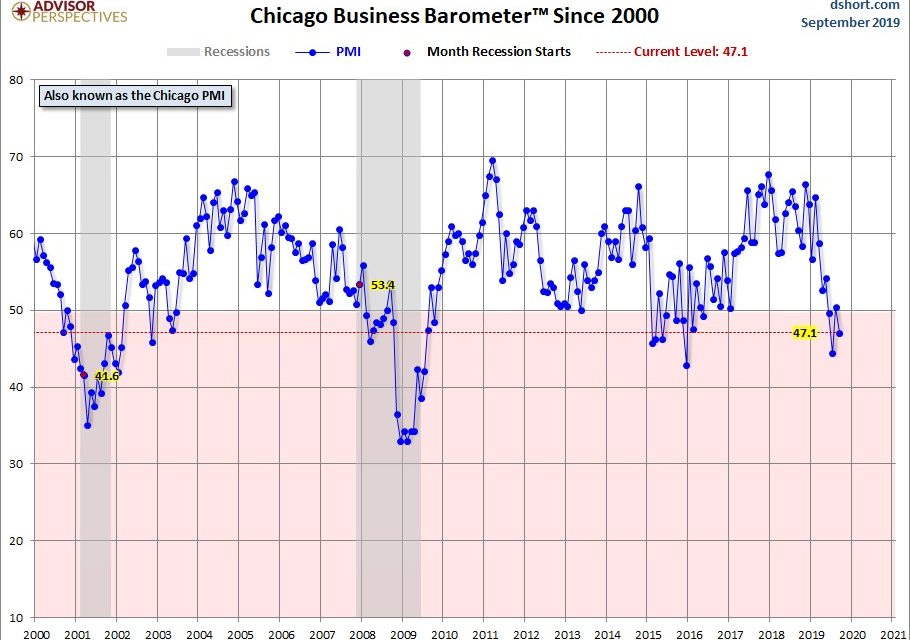 PCE is the value of all goods and services purchased by or for U.S. residents as calculated by the BEA. The August PCE report showed $14.658 trillion in nominal sales. Retail sales measures the U.S. retail industry. The U.S. Census Bureau surveys 4,900 firms each month to collect the data in this report. In August, there were $526 billion in nominal retail sales. As you can see, PCE is much larger than retail sales. Examples of consumption included in PCE, that are not in retail sales are services like utilities, healthcare, going to the movies, and gambling.

Even though this is JP Morgan’s chart of the week, the firm also mentioned that the global manufacturing PMI’s decline in new orders could lead to renewed weakness in the output index. (Since that statement, the September release showed the new orders index improved from 49 to 49.4.) On a related note, don’t be bearish on global growth and trade just because FedEx provided weak guidance that caused its stock to tumble. The trucking index is actually at a cycle high.

Q3 earnings season will pickup later this month, but a few firms have already reported their results. For context, as of September 27th, Q3 EPS growth was expected to be -1.55% according to The Earnings Scout. To be clear, that doesn’t mean growth will be negative because firms usually beat EPS growth by around 3%. The consensus for Q4 growth, which we must follow the closest, is 6.01%. This estimate will fall in the next 3 months. The velocity of this decline during Q3 earnings season is pivotal.

As you can see from the table below, the first 14 firms to report Q3 results have had big declines in their Q4 EPS estimates.

The average estimate change was -4.37%. These same 14 firms only had their Q3 estimates decline 1.48% after reporting their Q2 results. Q4 estimates are higher than Q3 estimates were which means they have further to fall. However, Q4 also faces much easier comps. We will be watching to see if weak economic growth leads to weak guidance. If estimates continue falling this much, stocks will fall in October and November.

FactSet is reporting weak results as well. In Q3, 82 S&P 500 firms have issued negative EPS pre-announcements. That’s the 3rd highest since Q4 2014. The 5 year average is 74. This weakness is being driven by tech which had 29 negative pre-announcements which is much above its 5 year average of 20.1. Healthcare had 15 which is above its average of 10.7.

Supporting the thesis that there is an economic backdrop for weak earnings is the Chicago business barometer index. As you can see from the chart below, the index fell from 50.4 to 47.1 in September.

Given the deleveraging in China and the trade war, it’s surprising that the manufacturing PMI improved from 50.4 to 51.4 in September which was the highest reading since February 2018. New orders grew at the quickest rate since March 2018. On the other hand, the employment and new export orders indexes were in contractionary territory. The demand came domestically since the trade war has weakened demand from America. As you can see from the chart below, the manufacturing PMI employment sub-index increased slightly to 47. Even with this mostly solid report, the 1 year outlook for output was weak.

Real PCE and real retail sales growth were almost the same. However, compared to recent results, retail sales growth looks strong and real PCE growth looks weak. Real PCE is more important since it measures a wider swath of economic activity. Rate cuts could drive a cyclical upswing in global manufacturing. Q3 earnings season has gotten off to a rough start. Can Q4 EPS growth be in the mid-single digits if the economy is weak? The September Chicago business barometer was weak. It’s almost recessionary. The Chinese manufacturing PMI actually improved in September despite the trade war.