Does The Market Finally See The Slowdown? 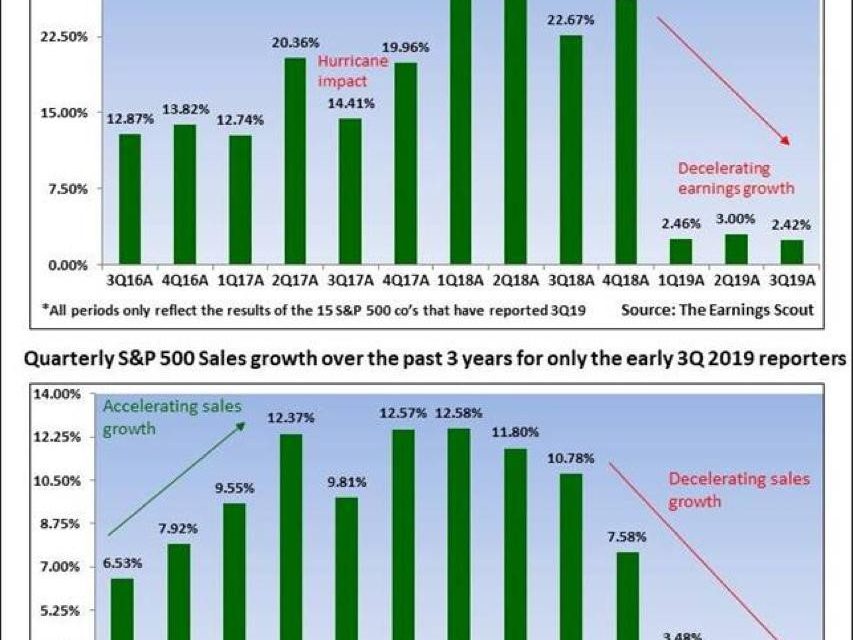 Of all the news events in October, whether it be about politics, monetary policy, or earnings, it’s surprising that the cause of volatility was the ISM manufacturing report since it told us what we already knew. The manufacturing sector is in a broad based slowdown; it has been in one for months. It’s as if the market slept through the weak Cass Freight index and the other subpar manufacturing reports, and woke up to realize there is a trade war and a cyclical slowdown. This supports a point we’ve made previously which is that you never can be sure what the market has priced in. Sometimes the market moves on something you thought was already known for weeks.

Even though this has only been a modest correction so far, it is already historic. Specifically, this is the 1st start to a Q4 where the S&P 500 has been down more than 1% on consecutive days. The last such start to any quarter was Q3 2002. Stocks usually don’t fall at the start of the quarter because it’s when new money comes in. As of October 2nd, the equity only put to call ratio signaled the market was oversold.

The Trend Weakness In Earnings

The charts below exemplify how long we have known about this cyclical slowdown. As you can see, for the past 3 quarters the first 15 S&P 500 firms to report earnings have had EPS and sales growth in the low single digits.

To be fair, the tax cut in 2018 made the comps very difficult. Next quarter will be the beginning of the end of tough comps. However, if the cyclical slowdown gets worse, no matter how easy the comps are, earnings growth will be weak and potentially negative. Don’t draw too much from Q3 data just yet though because it’s just a few firms. In the next few weeks, a majority of firms will report. The decline to start October suggests investors aren’t optimistic about these reports and the guidance firms will give.

There have been articles in the media discussing the auto weakness which may be exaggerating the situation, with data being negatively portrayed. We will try to show the data in a more balanced manner. There’s no doubt the big automakers reported yearly growth declines, but this might not be a disaster for the economy. Specifically, Toyota, Honda, and Nissan reported yearly sales declines of 16.5%, 14.1%, and 17.6%. The first two missed estimates. As you can see from the chart below, Ford F-Series truck sales fell from 228,000 to 214,000.

Sales fell the most since 2008 but current sales are almost double that of 2008 and they didn’t plummet nearly as much as in 2008 on a percentage basis. This could be a plateau just like the overall auto industry or it could be the start of a new trend.

Because of an inventory glut, auto makers gave out record discounts of $4,100. That’s a signal demand is weak. However, before you call for recession, recognize that there were record incentives of $3,506 in October 2017 and the economy didn’t plummet in 2018. The main counterpoints to the fear catalyzed by the individual reports are that this September had two fewer days compared to last year and didn’t include as much of the benefit from the Labor Day holiday as August. Labor Day was on the 2nd in 2019 and it was on the 3rd in 2018. Overall seasonally adjusted annualized total vehicle sales increased from 17 to 17.2 million in September which beat estimates for 16.9 million. Domestic vehicle sales rose from 13.2 million to 13.4 million. This looks like a plateau, not a collapse.

The September ADP report was weak, but wasn’t a disaster. However, when you look at it in relation to recent September BLS reports, it is problematic. In August, private sector job creation was revised lower from 195,000 to 152,000. In September, there were 135,000 jobs created which missed estimates for 152,000. This doesn’t sound terrible, but the ADP report has been running hot in previous Septembers. As you can see in the chart below, in the past eight years, in September, the ADP report averaged being above the BLS report by 55,125.

If the average keeps up, there will be about 80,000 private sector jobs created. The consensus is for 135,000 jobs created which is exactly what the ADP report stated. A miss could be coming.

Unsurprisingly, job creation was led by education and healthcare again as the group added 42,000 jobs. Manufacturing added 2,000 jobs which isn’t as bad as you’d expect after looking at the weak ISM PMI. Small firms added 30,000 jobs which was the weakest out of the three categories, but not as bad as earlier in the summer. The one year trend in job creation growth was 1.66% which was the weakest since 2011.

The Glimmer Of Hope

The housing market is far from a recession signal. The decline in long rates which caused the yield curve inversion was great for housing. As you can see from the chart below, in the week of September 27th the MBA mortgage purchase applications index was up 1% weekly and 10% yearly.

This has been the best 3 week growth period of the year. The best sales data has come in the fall this cycle. Expect another strong fall because of low rates. The average 30 year fixed mortgage rate is only 3.65%. The low this year was 3.49% in early September. Monthly residential construction growth was 0.9% in August which signals housing might help GDP growth in Q3 (it was down 5% yearly).

Earnings growth will be in the low single digits again in Q3. Auto sales at individual firms have declined sharply from last year, but the overall sales rate has been plateauing for a few years. This isn’t a massive collapse. Record incentives, by themselves, don’t signal a recession is coming. ADP private sector job creation missed estimates and showed the weakest growth since 2011. This is a bad sign for the BLS report. The census might help boost public sector job creation. The MBA mortgage applications index has had its biggest 3 week positive growth string in 2019 because of the decline in rates.