What Is The Chance Of A Recession & Does It Matter? 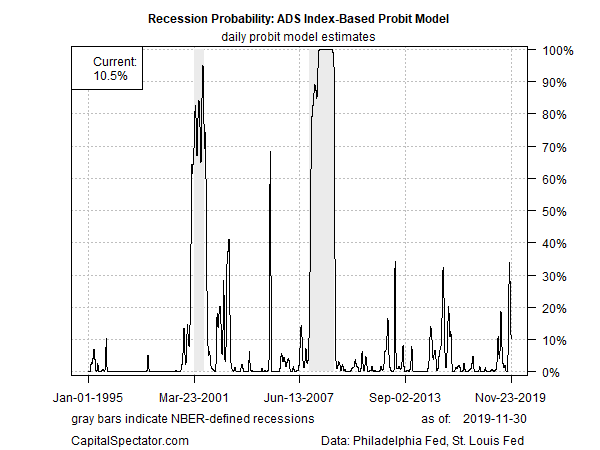 When it comes to investing based on a macro opinion, it’s not a straightforward exercise. You must determine what is priced in. It can also help to know the rate of change of the recession odds. It was obvious to exhibit caution if you thought recession odds were high in October and November because stocks were elevated. The trade wouldn’t be as easy if stocks were lower like in Q4 2018. In that case, economic weakness was priced in too fully and positive catalysts helped turn the economy around (Fed became dovish).

We Care About Recession Odds: Nothing Is Certain

According to the Aruoba-Diebold-Scotti business conditions index, the odds of a recession have declined recently, but the current chance of a recession could increase if the economic data gets worse. Past and current readings would be revised lower. As for now, the index bottomed at -0.79 in mid to late October and is at -0.51 as of November 23rd. As you can see from the chart below, there is now a 10.5% chance of a recession.

A few weeks ago, the odds of a recession were the highest of this expansion. This specific model isn’t the best to trade off of because it doesn’t give much lead time before recessions and can be revised after the fact. That being said, it also doesn’t make sense to just buy stocks because the economy always recovers from slowdowns. That type of logic supported buying houses in the 2000s because prices had never fallen.

The October construction spending report showed higher yearly spending growth and helped cause the Atlanta Fed Nowcast to lower its Q4 GDP growth estimate from 1.7% to 1.3%. That’s because it missed estimates and had an easier yearly comp. Specifically, monthly growth was -0.8% which missed estimates for 0.4%. That was even with the negative September revision from 0.5% to -0.3%. As you can see from the chart below, yearly growth improved from -1.4% to 1.1%. The comp went from 4.4% to 1.5%. Next month’s comp is -1.5%. This report was the first positive yearly growth reading in 2019.

The Earnings Scout has a better track record on stocks than most focused on earnings this year because it looks at the relative change in EPS estimates. Many following earnings this year thought the only option was to be bearish because stocks rallied when EPS growth was low or negative (depending on which data provider you use). The Earnings Scout shows non-GAAP S&P 500 EPS growth was 3.2% in Q3. The estimate for Q4 EPS growth is 0.98% as of December 3rd which is higher than Q3 estimates were at this point last quarter. On September 1st, Q3 EPS estimates were for -1.18% growth. The sequential improvement is partially because of easier comps.

Despite this potential growth rebound in S&P 500 earnings growth, The Earnings Scout isn’t bullish on stocks. The chart below shows the negative earnings to price divergence ratio is the highest in at least the past 2 years. This includes 4,000 stocks. This negative divergence of 3.71 is causing The Earning Scout to say stocks are overvalued.

The Global Manufacturing PMI is calculated by IHS Markit which is why it’s not a surprise to see it increase, since the U.S. PMI also increased and it has the highest weighting in this index. The global PMI was up from 49.8 to 50.3 as you can see in the chart below. This was a 7 month high and the first PMI above 50 since April. America’s PMI was the 5th highest. Germany’s was the 2nd lowest. The global new orders index increased from 50 to 50.4.

19 countries saw declines and 11 saw increases in manufacturing. The index was above 50 because China and America had readings above 50. Both America and world PMIs have increased 3 straight months. The Caixin Chinese PMI was 51.8 which was a 0.1 increase. This was the strongest reading since December 2016. It’s interesting that the US and China are seeing a rebound in manufacturing sentiment even though it looks like the US will raise tariffs on China on December 15th because phase 1 of the trade deal isn’t near completion.

According to ADS, the odds of a recession are 10.5%, but that could change when new data comes out. It’s smarter to say the odds of a recession have fallen than to say one was going to occur and now it isn’t. Most models didn’t show there being an over 50% chance of a recession at any point this autumn. Yearly construction growth improved because of easier an comp. Residential construction growth should improve with home price growth. Earnings estimates signal stocks are overbought. The Global Manufacturing PMI hit a 7 month high because of America and China even though there probably won’t be a trade deal in 2019.