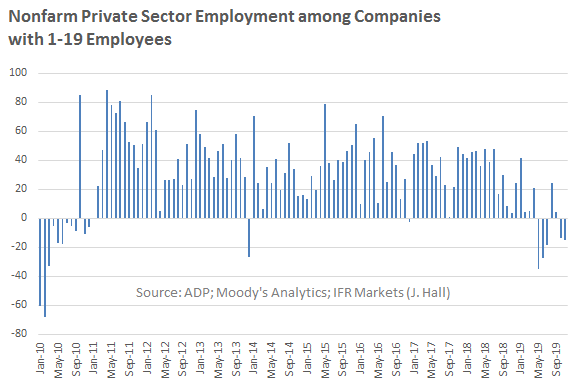 We’ve previously discussed how the November ISM manufacturing PMI was weak, while the Markit PMI showed improvement. Even though the Markit PMI hasn’t fallen below 50 this year, it’s not as if the weakness in the ISM reports has been unpredictable. Yearly manufacturing production growth has been negative in 5 of the last 7 months. We will see which November PMI was correct on December 17th which is when the November industrial production report comes out. Either way, the point remains that manufacturing has been in a shallow and wide slowdown in 2H 2019.

According to IIF, this slowdown has occurred because of an inventory overhang. If this thesis is correct, we could see a recovery in the ISM PMI in Q1 2020. As you can see from the chart on the left, the difference between the new orders and inventories index leads the ISM PMI. It bottomed in June 2015 which was ahead of the January 2016 PMI bottom.

In the recent few months, the difference has moved higher as it is positive again. This could lead to an upswing in the PMI. The PMI might join the Markit PMI and the regional Fed reports in positive growth territory. The chart on the right shows, using weight and count, global manufacturing PMIs are rising. This chart uses Markit data which is why it is more optimistic.

The November ADP private sector employment report was weak partially because of small firms. Specifically, the October reading was revised up by 15,000 to 140,000, but the November reading showed 67,000 jobs created which missed estimates for 156,000 and the low end of the estimate range which was 125,000. It would be problematic if the BLS report shows similar results as private sector payrolls are expected to be up 168,000 jobs.

This year, we have paid close attention to very small firms which have shown weakness in hiring growth. It’s not a huge surprise this is occurring because NIPA margins have fallen for 4.5 years. That’s the longest negative stretch since WWII. To be clear, margins haven’t fallen as much as they did in the last recession. Even still, you might expect to see less job creation with lower margins. FactSet shows 2019 S&P 500 EPS growth is expected to be 0.1% and sales growth is expected to be 3.8%. That’s a decline in margins.

Yearly growth in very small firm employment was 0.1% which was the lowest rate since February 2011. It’s notable that 9,000 of the job losses were in the service sector which has been more consistent in what has been the longest string of job creation by far.

In the overall report, the service sector added 85,000 jobs and the good providing sector lost 18,000 jobs. Like usual, the education and healthcare sector led the charge as it added 39,000 jobs. Recently, there was worry that the leisure and hospitality sector was creating too many jobs as a percentage of total job creation. This industry doesn’t pay well, but we found no evidence of it firing people quicker like some claimed. In November, it only added 18,000 jobs. As a percentage of total job creation, this might be less of an issue in the BLS report. However, we want to see more job creation in other industries, not less in leisure and hospitality. The professional and business industry has been relatively weak in the past few months. It added 28,000 jobs in November. In Q1 it added an average of 33,786 jobs per month, it added 28,605 per month in Q2, 28,055 in Q3, and so far in Q4 an average of 26,435.

It seems like the November retail sales report (which will be released on December 13th) will be strong. Redbook same store sales growth in the week of November 30th was 7.9% which was up from 4.3% in the prior week. That was the strongest growth rate since early January. As we discussed in a previous article, the online sales growth rates on Black Friday and Small Business Saturday were 22.3% and 18%. These sound like great numbers, but keep in mind that online retail almost always takes share from brick and mortar. Even still, the highest growth this cycle was 15.6% in August. These stats on Black Friday and Small Business Saturday are great.

The largest category in the retail sales report is motor vehicle and parts. That’s why the rebound in motor vehicle sales is such a positive indicator. In November sales were 17.1 million which beat estimates for 17 million and rose from 16.5 million. The October report was relatively weak compared to the last few quarters. Domestic vehicle sales improved from 12.7 million to 13.3 million.

We already discussed the weakness in the ISM PMI; however, we didn’t mention the potential green shoot from the report. The manufacturing sector appears to be recovering from an inventory overhang. The ADP report showed some weakness. Leisure and hospitality was a new source of lower growth. Professional and business has been weak for a few months. Very small firms have lost jobs for 5 out of the past 7 months. Based on the data from Adobe Analytics, Redbook, Costco, and the motor vehicle sales report, it seems like the November retail sales report will be solid.