Was Banking Sector In Crisis In 2020? 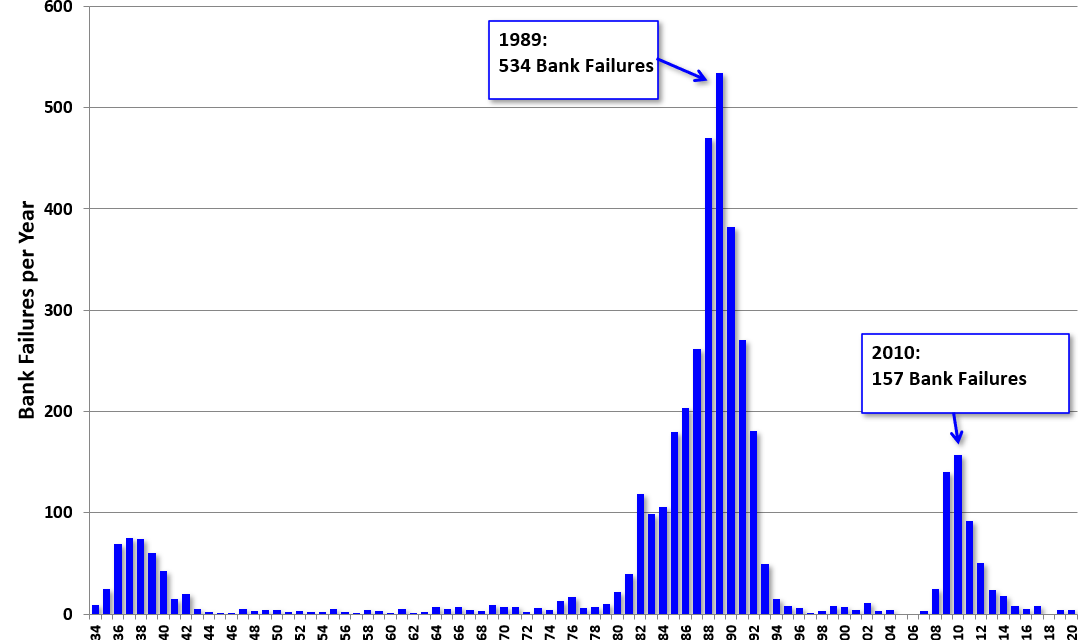 We catch a lot of criticism on Twitter for saying the banking system is in great shape. It’s easy to reply that the exact same thing was said in 2007. Of course, just because many people were wrong before the greatest financial crisis in a century, doesn’t mean we were wrong in 2020. The facts are different. There are tougher regulations and the banks have learned from their mistakes. The proof is in the chart below.

In 2020 there were only four bank failures even though there was a deep recession. This is exactly what you’d expect. Recessions are never caused by the same thing consecutively. For example, housing has been very strong in the past few quarters after its bubble burst caused the last recession. Furthermore, tech stocks were very strong in the last cycle and this one so far after being weak in the early 2000s. They led the market lower in the dot com crash.

Usually, buying companies after they experienced a traumatic macro shock is a winning strategy. It’s not as hard to find the winners after the crash as is it was during the bubble because reality sets in and the new rules are made. It’s easier to see what’s wrong with the companies after the shock because everyone is talking about it. One of the best examples of this was buying the ratings agency stocks after the financial crisis. The current sector that is being left in droves is energy. Finding the best fossil fuel stocks now isn’t a bad bet, depending on your time horizon. That’s not to say fossil fuel winners will do well for as long as tech stocks or ratings agencies did. Generally, the commodities cycle is quicker and these aren’t secular growth stories. However, we don’t think people will complain if they earn massive gains in a short amount of time.

ESG stands for environment, social, and governance. It seems like lately the market is throwing out the last two and focusing heavily on the environmental side with renewable stocks. We don’t see how the massive fees involved with SPACs signal good governance. On Wall Street, anything can be a bubble even supposedly good governance. This is why many describe the stock market as a fashion show. Areas get overhyped and then they crater. Even the internet was overhyped in the late 1990s which is impressive because the internet is one of the most important innovations in human history. Specifically, the stocks to play this mega trend were overhyped. The innovations proved to be important.

That’s important to note because many readers might believe renewable energy such as solar and wind will take over for fossil fuels in the future. That being true doesn’t mean the stocks are winners. It’s a lose lose situation. Even if renewable win, the overhyped stocks could still lose you money. As you can see from the table above, EU renewable energy stocks are up 204% in the past 4 years. One takeaway from this chart, which in our view is incorrect, is that this isn’t a bubble because other bubbles have risen more. The fact that the most insane markets in human history are used to justify renewable stocks is a very bad sign. Furthermore, the TAN solar ETF is up 487.7% since October 2018. That’s about the same as Japan’s real estate and stock market bubble in the 1980s as well as the Dow Jones rally in the 1920s.

Commodities To Be Helped By EVs

If we assume EV production and demand grow as much as the optimists say they will in the next decade, there will be huge demand for certain commodities. It’s not as simple as getting rid of oil drilling and having clean cars. Commodities need to be mined to build the batteries. We aren’t saying EVs are bad or good in terms of all externalities, but we are saying the commodity stocks growth investors hate might turn into big winners.

As you can see from the chart above, nickel and aluminum demand are expected to increase 14 fold by 2030 from 2019. Are we entering the golden age of commodities? It seems like some investors forget that we need commodities to push the global economy forward. Even software and especially cryptocurrencies need energy to support them.

The table below shows the best sectors to own and sell based on each macroeconomic metric. For example, when commodities prices rise, you want to buy energy stocks and sell tech stocks. We could see this sector rotation in 2021. When PMIs rise, financials and industrials do well, while consumer staples fall. That’s the exact environment we are in now as the December Markit manufacturing PMI rose from 56.7 to 57.1. The cyclical recovery is still going for manufacturing.

Rising unemployment is bad for the financials and good for consumer staples. Staples are considered safety stocks as people don’t stop buying items they need just because of a recession. The materials and financials like when interest rates rise. That increases net interest margins for the banks. Utilities don’t like rising rates because bond yields are competition for their high dividend yielding stocks. Finally, energy and financials like when inflation rises while utilities don’t. Judging by this table, you can see the obvious trade is to go long energy, materials, industrials, and financials. The sectors to avoid are consumer staples, tech, and utilities. The trade is only obvious if you see the economy reopening.

Just four banks failed in 2020 even though there was a bad recession. The bank stocks were hit hard most of the year. Of course, not failing isn’t the same as growing profits though. It’s tougher to do so in a low interest rate environment. The financials would be a buy if you see the economy reopening spurring higher PMIs and inflation. European renewable stocks are being compared to other bubbles in history, which in of itself is not a good sign. Renewables might take over, but their stocks might not do well. If EV demand soars, we will see massive demand for the commodities needed to produce the batteries.