Updated Look At The Economic Recovery 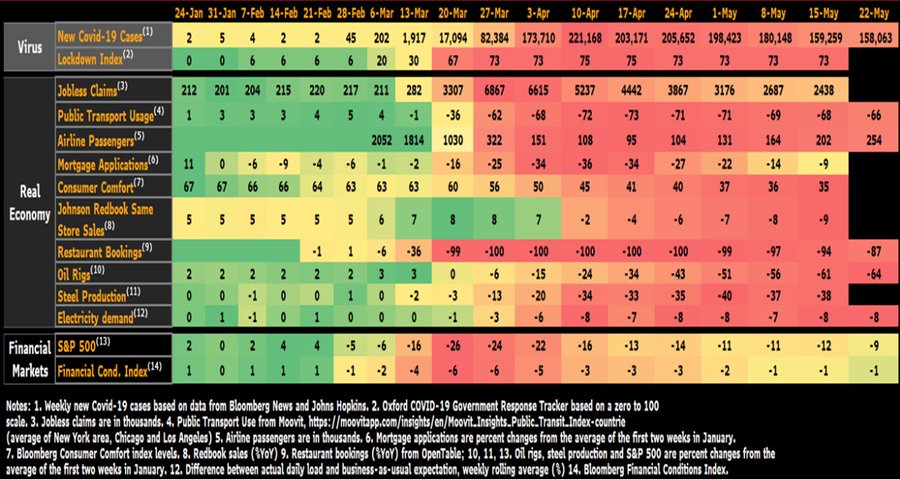 The graphic below is a great summary of the latest numbers on the COVID-19 crisis. It shows cases, the lockdown, economic data, and financial markets. The lockdown tracker being at 73 shows the government’s strong response to the pandemic. This index will likely decline in the coming weeks as all states partially reopen. NYC is expected to open in the 1st or 2nd week of June. It’s the last part of New York state that hasn’t reopened. Jobless claims have been falling. The consensus is for 2.1 million claims on Thursday which is still very high. The decline in initial claims has slowed considerably recently which means the economy isn’t recovering as quickly as many have hoped.

The table doesn’t show the latest data on mortgage applications and same store sales growth which showed improvement. In the week of May 22nd, the MBA purchase applications index was up 9% weekly after increasing 6%. The housing market is already doing well again. It went from on fire, to very week, to solid over the course of a few months. That was a very quick decline and rebound! Yearly purchase applications growth went from -35% to +9%. In California, mortgage applications are up 77% off the bottom and have had weekly growth for 7 straight weeks. The worst weekly decline was 23% in the week of March 20th, which was the week stocks bottomed. It looks like most assets traded in tune with each other. The entire economy reached synchronicity. The extreme correlation among stocks was the best indicator that the stock market was near a bottom.

The Redbook same store sales reading showed -5.5% growth in the week of May 23rd which was an improvement from -9.5%. The May retail sales report is going to be horrible, but signs indicate that monthly growth in June will be strong as the economy reopens. People are going to want to go outside because they have been stuck inside for so long.

Restaurant bookings on May 25th showed an 87% decline in America. The best country was Germany which had a 56% decline. The chart below shows the median market signal of the 1 year probability of default for restaurants. As you can see, in early April it peaked at 35% which was modestly below the peak of the low 30s in 2008. That default rate is clearly related to sentiment as it declines quickly after it spikes. The decline was helped by government lending programs and the improved prospects of an economic reopening.

The labor market was its worst in early May which is why the May labor report will be terrible. It has improved modestly in the past few weeks, but don’t expect the unemployment rate to fall in June. Just expect much fewer job losses. It has been obvious the economy would rebound in June because the shutdowns would be mostly over. However, with the stock market exploding over the past few weeks, that’s not enough to be bullish. Expectations are for a rebound. There needs to be a strong rebound to surpass them. So far, the results are muted. As you can see from the chart below, the yearly decline in job postings on Indeed was 39% in the first week of May. They were down 35.1% in the 3rd week of May. That’s still a horrible result.

Logistics support has been one of the strongest industries as its postings are down 9.9% and growth has improved by 8 points since the start of May. The worst decline was in hospitality and tourism which is down 66.9% yearly which is the same decline as the start of the month. The biggest improvement in growth since May 1st was in beauty and wellness which spiked 17.1 points to -39.9%. The biggest decline was in software development which fell 7.3 points to -40.1%. You wouldn’t think of this industry as doing badly as the SaaS stocks have outperformed this year.

Interestingly, the job postings in metros where more people can work from home are down more than other metro areas and even areas with high hospitality jobs. Plus, the work from home metros aren’t seeing a rebound in job postings. Now let’s look at the interest in jobs. The number of clicks per new job posting were up 104% for mechanical engineering and 84% for both marketing and media & communications. The areas with the biggest yearly decline in interest, which means the least competition, were veterinary which were down 20% and personal care & home health which were down 26% yearly. Nursing was down 14% maybe because the job has become a lot more stressful in the past few months.

The turnaround in markets has been shocking. Q1 was the worst first quarter in history as the market fell 20%. The S&P 500 is up 17.2% in Q2 which would be the best Q2 in 82 years if it ended the quarter at this price. Stocks are ignoring all negative news as the momentum and euphoria is drowning out any concerns. There are still legitimate worries though which should prevent the market from reaching new highs. One of the biggest ones is the potential for a rise in cases after states reopen. We previously mentioned Georgia (one of the first states to reopen) wasn’t seeing an increase in cases, but the chart below shows recent data suggests otherwise. If this prevents a full return to normal, the recession will be elongated and markets will switch back to fear.

The economy is improving as expected. The issue is the labor market is still very weak. It needs to improve at a faster rate. That won’t happen if the number of cases increases in areas that have reopened. They might not shut down again, but there will be increased distancing and other precautionary measures such as limiting the number of people in stores at a time. Restaurant default rate expectations have fallen, but they are still elevated. Job postings on Indeed are still down hugely from last year.