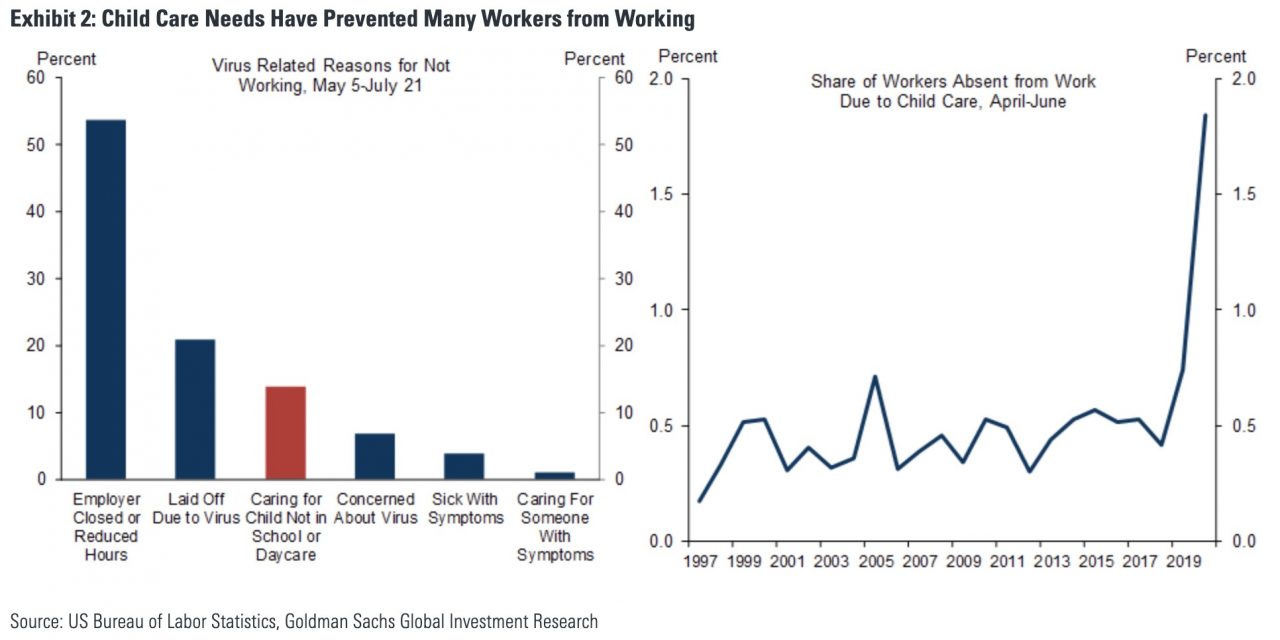 Unless you have children and are dealing with the economic ramifications of COVID-19, you might not realize its importance. As you can see from the chart on the left, caring for children not in school or at daycare was the 3rd most common reason people weren’t at work from May to July. It’s no surprise, given the uniqueness of this situation, that the share of people not working due to child care more than tripled (to almost 2%) from where it was before this pandemic.

Children are the least impacted by this virus, but they can spread it. NYC plans to reopen schools if its positive rate stays below 3% (NY is currently near 1%). It’s extremely difficult to have a child and work from home. The ones who have it the toughest are single parents and parents of young children. It’s also impossible to work from home if you don’t have a job that’s capable of that. It’s estimated that 15% of the labor force, which is 24 million people, are in 2 of the 3 situations that prevent them from working from home.

Low Educated Hurt The Most

As we described in articles in 2019 and early 2020, the labor market was fantastic for low income low education workers. They are hurt the hardest by recessions, but see great gains when the labor market is full. It’s back to square one for these workers as it will take at least a few quarters, if not years, to get back to how it was in 2019. In the meantime, there will be high unemployment. The consensus estimate is for 1.75 million jobs created in July (down from 4.8 million in June) which would bring the unemployment rate down 0.6% to 10.5%. We know the labor market weakened in July (rate of improvement fell) and that there were fewer people who could get back to work (easy fruit already picked). Plus, there were additional economic restrictions in the COVID-19 hotspots in the south and west.

The highly educated were the least impacted by this virus which is why the extra $600 per week from unemployment benefits was so critical. Congress is trying to pass another stimulus by August 7th which is when it’s scheduled to go on recess. If there’s something close to being done, they will push back the recess. The stock market is completely ignoring this. The logic is that the economy is so bad, Congress has no choice but to act. Secondly, the big tech stocks that are carrying the market will be insulated from any potential slowdown.

This is a unique recession, where certain aspects of the economy were hurt more than normally and others were spared. On the negative side, the number of active small businesses fell 2.2 million from February to May. If these small firms don’t come back, either a new business will be created or the mega corps of the 2020s will eat up the new demand. The latter would only accelerate the recent trend towards monopolies. 83% of NYC restaurants and bars can’t pay their full rent. That’s because of the regulations on indoor dining even though the COVID-19 positive rate in NY has been near 1% for the past couple weeks. To make matters worse, 71% of landlords wouldn’t waive part of the rent, 61% wouldn’t defer payments, and 90% didn’t renegotiate leases.

The rule for taking PPP loans that become grants is that at least 60% of the money needs to go to paying employees. That doesn’t mean some of these firms receiving money don’t plan on laying off workers anyway. Between $291.6 million and $647.5 million in loans were given out to the over 150 companies that plan to layoff workers. From May 1st to July 17th, they had plans to cut 15,814 jobs. The chart above shows the type of layoffs. 44% were permanent or the business closed.

In total, 4.9 million PPP loans were given out. That’s $521.1 billion. Congress might add more money to the program which could help a lot as many firms have already spent the money. The best catalyst would be for the restrictions to be lowered and COVID-19 cases to fall. We’ve seen cases fall recently as it appears the worst of the 2nd wave is over. That’s critical to getting children back to school. Remember, the back to school shopping season is the 2nd most important shopping holiday season of the year.

Even with all these negatives, more people are buying cars, RVs, and boats as social distancing vacations have become common. In July, auto sales increased 11.1% from June to 14.52 million. There is literally a shortage of used cars because demand is so high. As you can see from the chart below, this was a rare recession in which credit card delinquencies fell as credit card debt itself also fell. Consumers are also investing more which could be a problem for the stock market like the late 1990s. Interactive Brokers had 913,000 new accounts created this year as of the end of July which was a 40% increase from last year. Robinhood peaked at 16th in the App Store on June 8th which was an intermediate term peak in the market. It’s currently the 89th most downloaded app.

Whether or not kids can go back to school will be huge in determining where the labor market is headed. If they go back to school, the unemployment rate might drop quickly. The higher the education someone has, the more likely they can work from home. Millions of small businesses have closed and NYC restaurants are struggling. Congress is expected to pass a stimulus this week. The market has literally no doubt about one passing. Credit card debt is falling and people are spending more on social distancing activities. They are also investing more which could create a boom & bust in the stock market.