This Economic Data Point Is A Bearish Signal 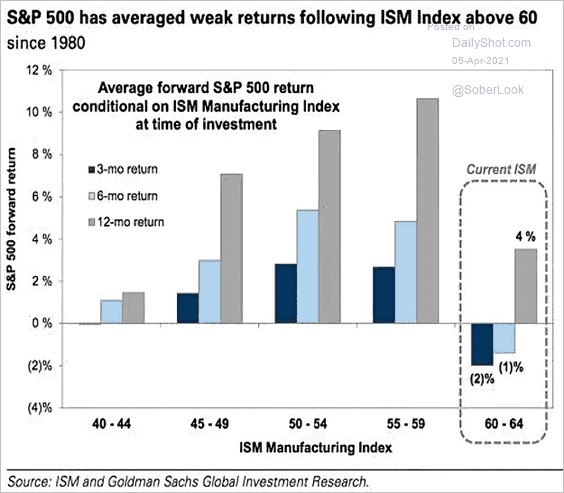 Because there were 916,000 jobs created in March, the unemployment rate fell to 6%. Goldman Sachs thinks it will end the year at 4% which is full employment. In order to catch up to the job growth trajectory before the pandemic, the economy needs to create 10.6 million jobs. There are 8.4 million fewer jobs now than there were in February 2020. The economy probably will create over 3 million jobs in the next 3 months which should put a dent in those totals. We just started the 2nd spike in job creation. The vaccine distribution is going so well that the 7 day average of deaths in America has fallen to 818. That’s the lowest since October 20th. Outside of the first few weeks of the pandemic, the lowest is 524.

The labor force participation rate increased 1 tenth to 61.5%. It ended the last expansion at 63.3%. It’s very unlikely to get back to that level ever again because the population is aging. Many older Americans left the labor force permanently last year. We’re seeing signs that it won’t fully recover in the last few months of data. The post-recession peak is 61.7% in August 2020. We’ve lost ground in the past 7 months. This rate will probably get above 62% in the next few months.

The prime age labor force participation rate rose 2 tenths to 81.3%. It’s still below its post-recession high of 81.5% in June of last year. It’s remarkable that all the jobs created since then didn’t increase this rate at all. The pre-pandemic level was 82.9%. We think it will make nearly a full recovery in the next few quarters. As you can see from the chart below, the prime age employment to population ratio is 76.8%. It’s dramatically closer to recovering than it was at this point last cycle. The last cycle hadn’t even found a bottom at this point yet.

The length of the work week recovered after a big decline. It was up from 34.6 hours to 34.9 hours. It fell 1.4 hours from its record high last month. Usually, when wage growth falls, hours worked rises and vice versa. Since the work week rose more than average pay growth fell, weekly earnings growth rose from 5.8% to 6.7%.

In the past couple months, we have been previewing how great the economic data would be in the spring. It is not disappointing in the slightest. The services ISM PMI reading rose from 55.3 to 63.7 which made this the highest PMI ever. This data series started in 1997. This means the highest net percentage of services businesses said business improved from last month. Furthermore, the business activity index ramped 13.9 points to 69.4. This report was truly unprecedented. The new orders index was up a monster 15.3 points to 67.2. This report was so strong it’s undoubtedly the peak for the cycle.

The employment reading was up a muted 4.5 points to 57.2. Maybe all those orders mean more jobs will be created next month. We’re hoping for well over 1 million jobs added in April. The prices index was up 2.2 points to 74. We are experiencing fairly high inflation. It will be fun to see the March CPI report. It’s coming out next week. This PMI is consistent with 5.1% GDP growth. The Atlanta Fed model shows Q1 growth will be 6%. The star of the year will be Q2 GDP growth. Q2 will either be right before we reach herd immunity or the quarter in which we reach it. America will be 75% vaccinated sometime between June and August.

An educational services firm stated, “There is optimism in higher education that Fall 2021 will be near normal with vaccinated students, employees and staff returning to their roles on campus.” It’s very clear, education in person learning will be safe by the end of the summer. It will be interesting to see how many people stick to online classes. Obviously, online college classes were prevalent before the pandemic.

High ISM Is Bad For Stocks

Some investors might forget that a high ISM reading is actually bad for stocks. Obviously, we don’t have data for a record high services PMI and there are barely any readings better than the manufacturing PMI. The point is the highest readings give the worst near term returns. As you can see from the chart below, when the manufacturing ISM PMI is from 60 to 64, the S&P 500’s average 3 month return is -2%. The good news is the average yearly return is 4% which is over double the returns following the worst readings.

While we think the PMI has peaked for the cycle, economic growth is only going to get stronger. Economic growth will peak sometime in the middle of the year. The stock market has already priced in the great growth that’s coming, but that doesn’t mean a correction is imminent either.

The March labor report was great. It’s very likely that the April labor report will be even better. Most pandemic job losses will come back within the next few months. We should reach full employment this year. We just had a record high services PMI. It’s actually not as impressive as the manufacturing PMI because the services PMI was the highest since 1997 and the manufacturing PMI was the highest since 1983. High PMIs aren’t great for stocks in the short term. Obviously, more goes into predicting stocks than a couple of data points. Many investors don’t even try to predict where the market will go in the next 3 months. They say you can’t do it or it’s not worth the effort.