A Tighter Labor Market Much Sooner 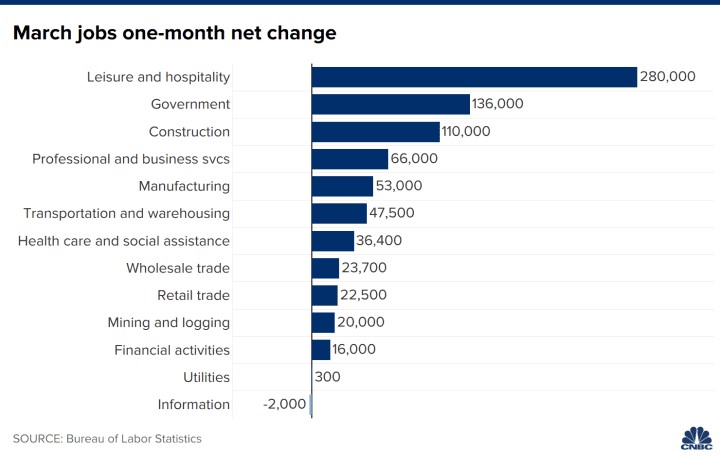 This is the exciting labor report we have been waiting for ever since the positive vaccine data was released in early November. It is a report worth celebrating because it is the beginning of what should be a few months of very strong job creation in which most of the jobs lost due to the pandemic will be recovered. It is about to be ‘game, set, match’ for the pandemic economic weakness. Non-farm payrolls in February were revised higher from 379,000 to 468,000. Private job creation was revised up from 465,000 to 558,000. It wasn’t a bad month. It’s just that job creation at that rate would mean it would take years for full recovery. We might actually reach near full employment later this year.

March’s job gain was 916,000 which was above the consensus of 658,000 and just below the highest estimate which was 1 million. As you can see from the chart below, the decline off the employment high before the pandemic is now less than the trough of the Great Recession. However, it’s still worse than any other post WWII recession. Specifically, employment is 5.51% off its high. We mentioned last week that the ADP report showing private sector employment 6.97% off its high was too negative. We think it’s great that there is still so much room for job creation to run. Within a few months, investors will switch to worrying about a shortage of workers. The narrative will dramatically shift this summer when inflation is raging.

We Were Right Again

We predicted a few weeks ago that the models using March’s data would show a much quicker recovery if job creation stayed at that clip. The chart below shows the final results. As you can see, if job creation continues at March’s clip, we will get back to the payroll growth trend in June 2022. That sounds great, but we will do better. Job creation in April will be better than March. Eventually job creation will start to slow when we approach full employment, but we are still pretty far away from that. As we mentioned, investors are going to wish there was even more slack in the labor market within a few months. Right now, we are in a great position because there is still a ton of slack to work with as demand is accelerating.

Bloomberg shows America will be 75% vaccinated within 3 months. We think the biggest months for job creation will probably be in the months leading up to that because so many states have eliminated their restrictions. If we get to 75% vaccinated in July, we see job creation slowing following that marker as the economy approaches full employment. However, the vaccination speed is increasing. If 75% vaccination occurs by May, there probably will be more amazing employment reports afterwards.

There is only a certain amount of job creation possible in one month considering the fact that we’ve run through most of the temporary job losers. In March, temporary job losers fell from 2.229 million to 2.026 million. There were 750,000 temporary losers in February 2020. The next step of this labor market recovery is to go through the permanent losers. The good news is permanent losers peaked for the cycle in November. In March, they fell from 3.497 million to 3.432 million.

Economists and investors want to know how quickly job creation will occur in the next few months since much of the creation will occur via a drop in permanent losers. That means new jobs will need to be created for them along with people entering the work force. We think these jobs will come back extremely quickly. Many are in the leisure and hospitality industry which is about to have its best summer ever. March was just the beginning of the fun.

As you can see from the chart below, this industry added 280,000 jobs. Within leisure and hospitality, food services & drinking places added 176,000 jobs. There aren’t many areas with restrictions on eating out left. On March 19th, NYC raised its indoor dining restrictions to 50%; the state’s capacity is at 75%. We are within a few weeks from all restrictions going away.

Arts, entertainment, and recreation gained 64,000 jobs and accommodation gained 40,000 jobs. According to Bank of America, leisure travel airline bookings are only down 2.1% from 2019 levels. However, corporate travel is still down 77.2% which means overall bookings are down 44%. Leisure should easily get above 2019 levels in a few weeks. Corporate travel will start to pick up after America gets to 75% vaccinated and the CDC say it’s safe. That should occur sometime this summer. Leisure and hospitality is still down 3.1 million jobs from before the pandemic. They might all be gotten back within a few months given the intense demand for travel.

This was a great labor report. We didn’t get to some of the details in this article; look for more discussion of it in future posts. If job creation continues at the current pace, we will get back to the prior trend by June 2022. That’s an amazingly quick recovery from a pandemic that initially caused well over double the losses as seen in the Great Recession. There is still plenty of slack left in the labor market. Job losses are now worse than every recession since WWII besides the Great Recession. Job creation should be so quick that in six months investors will wish there is more slack in the labor market.