These Countries Got Cheaper In 2020 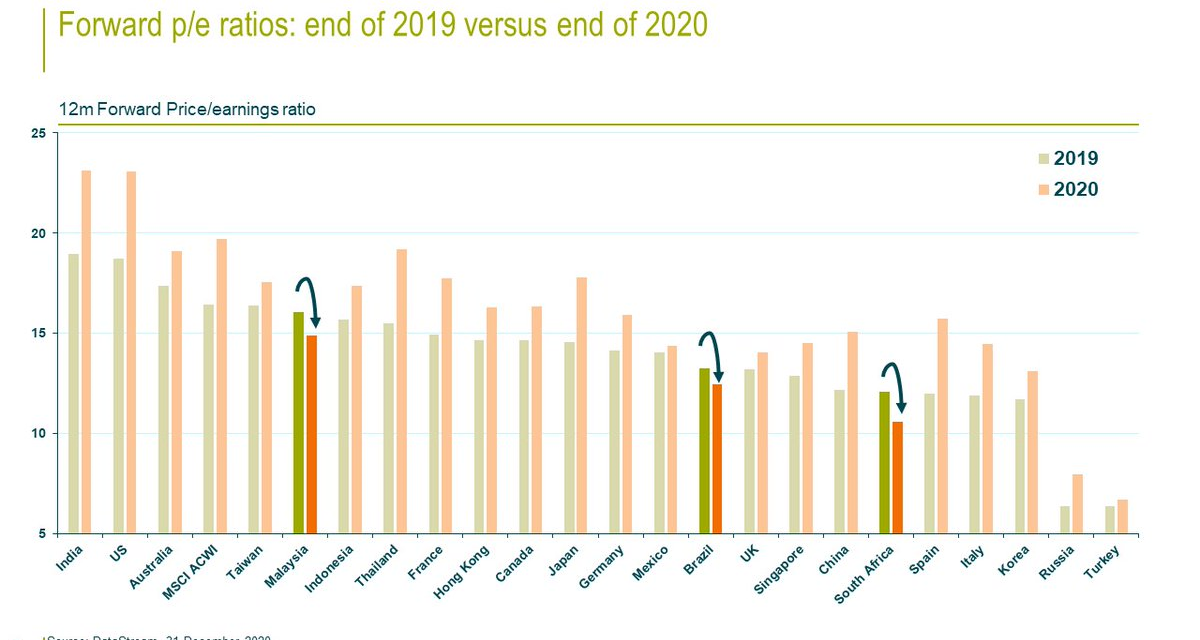 The stock and bond market automatically priced in a stimulus when the Georgia election results were coming in. That’s not to say the entire policy move is already priced in. It can’t be because we don’t know what it will be. The 10 year yield is now at 1.079% as treasury investors are taking this very seriously. Some people said this spike in yields was too much too quickly based on standard deviations. That’s nonsense because markets move quickly in reaction to news events.

If a company gets offered to be taken over at a premium, you don’t worry about standard deviations. Now we have the potential for higher growth and inflation because of a reopening of the economy and another stimulus which is directly following a $900 billion stimulus. The checks haven’t even fully gone out yet and we’re already talking about more spending. All this fiscal and monetary stimulus has to push yields up.

The long bond bulls point to high short positioning in long term treasuries, but once again, that doesn’t matter because we had a news event. If the Dems would have lost and no stimulus was expected, the 10 year yield would have fallen more than it rose because of all these shorts. Treasury shorts ended up being right even though it was a crowded trade. The contrarian position isn’t always right.

The screenshot above shows what Goldman is projecting. This doesn’t mean this exact policy will be enacted. This gives you a baseline. If the stimulus is larger, it means yields need to rise further. As you can see, Goldman forecasts another $750 billion stimulus. That includes $300 billion in stimulus checks, $150 billion in unemployment insurance, and $200 billion in state and local government aid. We see more aid being given to the unemployed and governments because the original idea of $2,000 checks came from Trump.

Now that he isn’t in office, the Dems will shift towards helping the neediest. The GOP has been against unemployment benefit boosts because they think people won’t be incentivized to work. That’s a faulty claim because few want to rely on the government. It’s very inefficient as we have seen with the all the fraud and websites not working. In addition, people don’t want to stay on unemployment benefits because they don’t know when they will end.  If the government worked like a high quality business and the benefits were guaranteed to go out for 1 year, some people might want to not work.

We have discussed in many articles how the banking system is in strong shape. If there is a financial collapse where hundreds of banks fail in 2021, you can tweet us how we were wrong. For now, the data is in our favor.

As you can see from the chart below, allowance for loan losses is a little more than half the peak in 2010. Also, it looks like it’s set to come down. Keep in mind, these are just allowances. The banks are being extra cautious; they are taking out larger than needed cushions. The banks are set up well because the economy is reopening which means some troubled loans in the leisure and hospitality industry will start to be paid back. Plus, net interest margins will increase.

Expensive Any Way You Slice It

The S&P 500 has a high PE ratio. The ratio is being pushed up by low estimates and euphoria. That’s why we think it might surpass the late 1990s level. That being said, estimates are rapidly increasing. At a certain point, the high multiple isn’t because of suppressed estimates. It’s just a sign of a market that offers low expected returns. The current 22.3 forward PE ratio is just 2 points below the top in the late 1990s. It wouldn’t take a massive run to become more expense than the biggest bubble in history which is scary.

The only metric by which the stock market is cheaper than its 25 year average is the earnings yield Baa yield spread. Only interest rates justify this expensive market. We expect the market to have multiple compression. That’s a sideways correction while earnings spike because of the improved economy. Interestingly, the Shiller PE ratio isn’t one of the worst metrics. It’s interesting because bears have been saying to avoid U.S. stocks for years based on the high 10 year CAPE multiple.

Almost Everything Got More Expensive

The global economy is expected to rebound along with America and global asset prices are doing well as a result. Nothing matched the hottest U.S. stocks in the first few months after the March crash, but emerging markets have been gaining steam in the past few months. As you can see from the chart below, 20 out of 23 countries saw multiple expansion last year. Only Malaysia, Brazil, and South Africa got cheaper. America is the 2nd most expensive market.

If you have a really great company, it will likely always be undervalued unless we are in a market bubble. As you can see from the chart below, Wal-Mart was always way too cheap compared to the price needed to give off 10% returns per year. You probably shouldn’t use this to justify paying high prices because this example has survivorship bias. However, it certainly supports not selling your best ideas solely because they get expensive. The problem is there aren’t that many companies as good as Wal-Mart.

Goldman sees another $750 billion stimulus coming from the Dem Congress. This expectation is boosting long bond yields. If the stimulus ends up being even higher, look for even more of an increase in yields and cyclical stocks (energy & banks). Allowance for loan losses is peaking which is great for banks. The S&P 500 is expensive according to most metrics. Almost every country’s stock market got more expensive last year. Wal-Mart is a rare example of a stock that was a buy at almost any level it traded at because the business was compounding at such a high clip in the 1960s, 1970s, and 1980s.