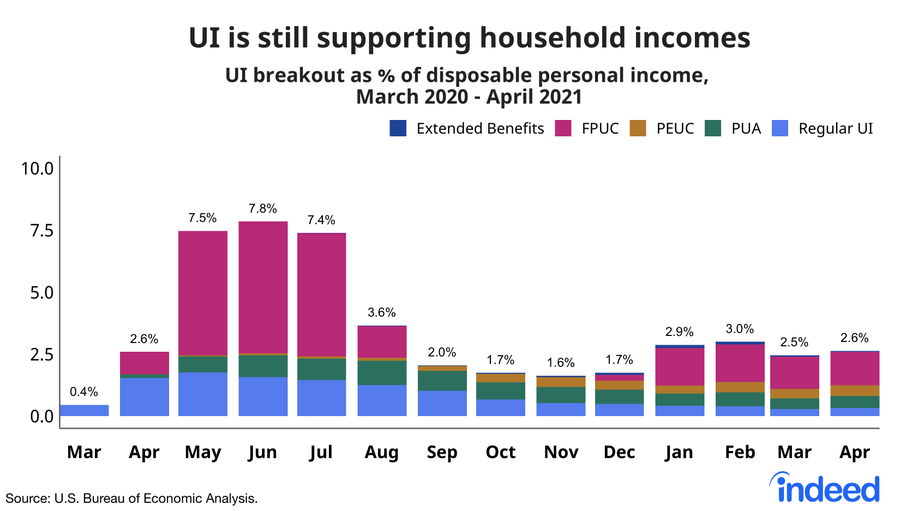 We are on the eve of the May BLS labor report which should show job creation rebounded following the much weaker than expected reading in April. This will come right before the Fed’s June meeting. It probably won’t impact the Fed’s guidance unless it misses or beats estimates by a lot. Everything supports the premise that job creation will increase in May. April’s weak reading was a ‘one off.’

As you can see from the chart below, non-seasonally adjusted claims fell 35,000 to 420,000. PUAs fell 1,000 to 94,000. Pandemic claims don’t matter much anymore because 23 states are about to end them early. That should lower regular claims too because more people try to get benefits when they have a greater chance of being accepted or can earn more money. 3.5 million claims in total will go away when these 23 states pass their deadlines. It’s possible more states join the ranks, but it is getting late in the game to do so. We are almost in June. If a state now announces it will end benefits 2 months in advance, it will only end its program a few weeks before the national end date.

Seasonally adjusted claims fell from 444,000 to 406,000. We have already predicted the 4 week average will fall below 250,000 by the end of the year. It’s currently at 458,750. Continuing claims fell 96,000 to 3.642 million. This reading has been steady since March which is surprising given the economic improvement since then. As of May 8th, the total number of people on all benefits programs fell 175,000 to 15.8 million. This is about to take a massive dive in the next few months as the economy reopens and the pandemic programs end.

Everyone is wondering how the end of the pandemic programs will impact the lower class. The K-shaped recovery is already rearing its ugly head before those programs end.  Hopefully, more job creation and minimum wage hikes can help the lower class deal with this negative catalyst. As you can see from the chart below, the spending bump following the stimulus is over for those making between $0 and $40,000 per year.

As we predicted last year, the upper income class is starting to spend all the money it saved during the heart of the pandemic. Those making $150,000 or more per year are increasing their spending by 50% from January 2020 (based on debit and credit card spending data). They are booking vacations and dining out in anticipation of the pandemic ending. With the housing market and auto market so overheated, the upper class might shift their spending to leisure activities. Specifically, surveys show a lower percentage of consumers plan to buy a car or a house. That money is likely to go somewhere else.

Craziness Within The PCE Report

The comps dramatically affected the April PCE report. Let’s try to look past the noise in this report. Personal income growth was -13.1% monthly which fell from 20.9% in March. That missed estimates for 0.5%. Apparently, economists missed the memo that the stimulus checks were mostly sent out in March, not April.

With these benefits being phased out, millions of low income people will be more aggressively looking for a job. We think they will be able to find jobs this summer. Of course, the upper income spending boom is going to matter more to the stock market and the economy. However, the bottom third of the country needs to do well enough for the country to function. They certainly have a say in how the country is run due to their large proportion of the population.

Personal consumption expenditures were up 0.5% which missed estimates by a tenth. That was a solid reading since growth in March was revised up 5 tenths to 4.7%. Clearly, upper income consumers saved the day by spending their trove of savings. There was a very sharp decline in the savings rate as you’d expect with such a difference in income and spending growth. The savings rate fell from 27.7% to 14.9%. It will fall back to the single digits in the next few months.

The Fed is going to completely ignore core inflation being above its target because everyone knows this was largely due to the weak comp. Core PCE inflation was only 93 basis points last April which was the lowest reading since December 2010. This weak comp combined with supply chain issues and increased demand got us the highest yearly core PCE inflation reading since July 1992. This shows you how rare it is for this reading to spike.

The table above shows just 5 categories generated 64.7% of core PCE inflation. These categories are only 3.17% of overall expenditures. Clearly, small parts of the economy having outsized impacts aren’t going to cause the Fed to hike rates.

Initial claims fell again. We will be watching closely how the end of the pandemic programs in about half the country impact the lower income class. The anticipation of this drop-off might be causing the lower income class to cut spending now. Inflation spiked in April. But that’s old news. It’s interesting how just a few categories drove the PCE reading. Core PCE inflation almost never spikes this much.