Life Is Not Back To Normal 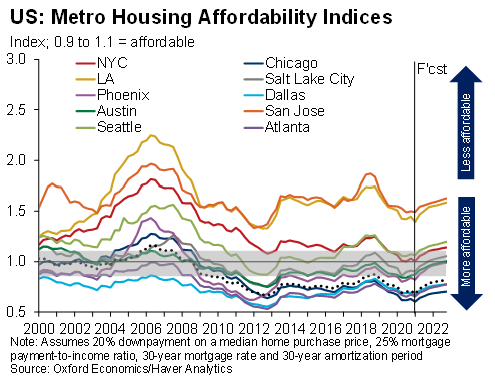 Plenty of people’s lives have already returned to normal (potentially even for a couple months). However, even though the pandemic is on the mend, the overall economy is still not back to normal. The 7 day average of COVID-19 cases has fallen to just 23,162 which is the lowest reading since mid-June.

One example of life not being back to normal is the lack of a full return to offices. There is a lot of talk in the media about how workers don’t want to return, but employers need them back in the office. This is a hot topic because workers will return this summer and fall (workers will be brought back gradually). The 10 city average occupancy rate of offices was only 28.1% as of May 19th. That’s very slightly above the peak in October when no vaccines had been given out. That’s sounds crazy initially, but consider the fact that waiting another 2 months means the transmission risk will fall from low to minimal. If a company has had workers stay home for 14 months, another 2 months won’t hurt.

Dallas has the highest office occupancy rate. It is 42.3%. Keep in mind, the rate is usually in the 90s. Even this relatively open city has room to improve. The lowest two cities were San Francisco and New York which were just 15.6% and 17%. There will potentially be a massive shift in these cities in the next 1-3 months. June should be the start of the shift.

The chart above looks a lot like the office occupancy chart for NYC. MTA bus ridership has stayed about 40% below its normal level. It’s actually below where it was in August even though the pandemic is nearly over. Specifically, in New York state there were about 500-700 new cases per day in August. The current 7 day average is 882. It’s obviously safer now since we have the vaccine. We don’t know what threshold will need to be hit for life to return to normalcy. Surely, that threshold will be hit this summer unless something unexpected occurs.

Oil firms have changed dramatically compared to 5-7 years ago which is bullish for oil. Many investors don’t trust oil firms to limit their production to avoid flooding the market which lowers the price of oil (which is counterproductive). That lack of trust along with the worries about the environmental impact of burning fossil fuels is constricting production growth. Investors want dividends, not capex growth. Companies don’t have a choice. Investors control their decision-making. They can’t produce as much oil as possible. Energy has become a short duration play.

As you can see from the chart below, energy firms have slashed their capex in the past few years and have maintained their dividends. In theory, if WTI oil heads towards the mid-70s, we could see dividends increase and capex remain steady. Oil production is definitely going to increase in the next 6 months, but not in line with demand.

We are very close to inventories reaching normalcy. In theory, low inventories and spiking demand should be bullish for the price of oil. Maybe it can get above the mid-70s. Specifically, US product inventory excluding the strategic petroleum reserve is 1.276 million barrels (as of March 26th). In mid-March 2020 right before the pandemic, it was slightly above 1.25 million. We should see oil prices react this summer.

The housing market has become less affordable due to higher prices. The expensive prices on the coasts along with the pandemic encouraged people to move inland to more affordable areas. This has made it more expensive to buy a house in lower tier cities which is making inhabitants very angry. Incomes are lower in these cities which means people from California and New York are pricing inhabitants out of the market.

As you can see from the chart below, NYC and Los Angeles are the least affordable cities. When people from those cities look at houses in Austin and Phoenix, they look cheap in comparison. Interestingly, the forecast calls for all cities to become less affordable in the next year. The winners are the homeowners in these cities. Some critics wonder who baby boomers are going to sell their houses to as they age. That’s the reverse of reality since there is a housing shortage. Boomers are having no problem selling their houses (not that they are doing this at scale).

Due to rising incomes and low interest rates, buying a home is still largely affordable. However, we still need more houses built. It’s a very stressful situation to buy a house since there are usually multiple offers above the asking price. This is causing many people to pull back from buying. Plus, there is less of a need to leave the city (where people are more likely to rent) since the pandemic is expected to be over within a few months.

As you can see from the chart below, the percentage of consumers with plans to buy a house fell by the most ever in May. That being said, this is a volatile reading. It’s only being highlighted because it confirms the anecdotal evidence of consumers not liking higher prices and the lack of supply. Don’t read too much into this survey. This isn’t the end of the strong housing market. The two ways to end the trend are for rates to spike and for the labor market to worsen (for the upper middle class).

Most people still aren’t back to the office in the top cities. We need to wait another 6 months to see what normalized office usage looks like. Don’t read into the current levels just yet. The new workplace won’t be this different. People need to return to the office for MTA usage to recover. To attract investors, energy firms need to pay big dividends, not spend more on capex to grow production. The housing market is becoming less affordable and supply is scarce. This lowered the percentage of consumers with plans to buy a home in May.