The Federal Reserve Wants You To Own Gold 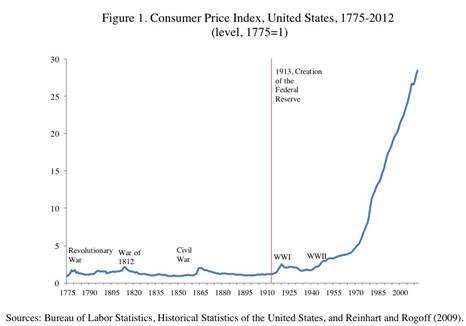 At the time the Federal Reserve was doing its 3 rounds of QE and had a zero percent Fed funds rate, there were predictions by bearish investors and Austrian economists that inflation would run out of control. This hasn’t happened as inflation, measured by Core PCE or CPI, has stayed below the Fed’s 2% goal for most of the past few years. In fact, the Fed and the ECB, which did its own version of QE, are wondering where the inflation is. A policy like ‘helicopter money’ where the government would give currency to citizens would be inflationary as more currency would be chasing the same amount of goods, thus reflected by a higher price of the goods in dollar terms. However, that policy was only referred to by prognosticators and never saw the light of day, yet.

To be clear, we aren’t ragging on Austrian economists. Firstly, not all predicted hyperinflation would come from QE. It’s difficult to get a complete grasp of what Austrians are thinking because it’s not hierarchical like mainstream economics which has PhD distinctions to measure who is the most respected. Besides PhDs, working at the Fed also creates an intellectual leadership group for the Keynesians. For Austrians, you need to look at some popular figures like Peter Schiff and read through the comment sections of blogs and social media websites to get a feel for where the group is leaning. Finally, let’s give the Austrian economists credit for predicting the housing bubble. With the financial crisis far in the rear-view mirror, people scoff at the fact that many used their knowledge of capital markets to get this one right. Hindsight should make it more impressive, not less. It was the worst recession since the Great Depression as many banks who were thought to be fortresses of security came to their knees.

Looking at the effect QE has had on inflation is inherently short term because it just happened a few years ago. We only have two major episodes of the Fed expanding its balance sheet, in the 1920s and 2010s. It’s difficult to draw conclusions from two examples because there are so many other factors which affect the economy. Imagine if a scientist was forced to draw a conclusion based on two experiments. It wouldn’t be possible. No experiments in economics are like scientific experiments because there is always a myriad of moving parts since the world, which economics is a measurement of, is a complex system, not two dimensional.

While there isn’t much conclusive data on the effects of QE, since its ongoing globally and would provide definitive evidence only when the experiment is terminated, there is a lot of data on inflation which we can look at to see the effects of central banks’ policies. The historical inflation charts below have interesting trends worth reviewing.

The chart on the left shows the global year over year inflation rate since 1209. The chart on the right zooms in on the last 200 years. At first it looks like a bunch of random squiggly lines, but it shows how there hasn’t been much deflation since the Fed was created. Previous to the creation of the Federal Reserve, when currency was backed by money, there used to be as many bouts of deflation as there were bouts of inflation. In the chart on the right, you can see the Great Depression was the only bout of deflation since the Fed was started in 1913. Given the fact that interest rates and inflation are so low now, it’s possible the Fed and other central banks are keeping deflation at bay with low interest rates and quantitative easing.

The two Deutsche Bank charts below give us more information on inflation.

Median global inflation started spiking after the Fed was created. With all the bouts of deflation, prices were relatively stable over time before the creation of the Fed. This brings us back to the predictions on the current Fed policies. It’s not that policies will create hyperinflation; it’s that deflation won’t occur, so prices will skyrocket over decades. It’s like the analogy of the frog sitting in hot water because the temperature was raised slowly. The chart on the right doesn’t make the dollar devaluation look slow, but that’s because it is a 117 year chart. Realistically, consumers won’t notice an increase of a few percentage points every year. However, it adds up to major spending power deterioration over time. Another point worth mentioning is no one alive now remembers the period where prices were stable prior to the creation of the Fed. Consumers expect prices to rise, but they don’t know it doesn’t have to be this way.

The lack of deflation is by design. There’s nothing the Fed fears more than deflation. The fear looks irrational when you look at the series above because the prices look much more stable than they’ve looked in the past few decades. The Fed thinks deflation is bad because it often occurs after recessions when demand is low. Deflation can lead to currency hoarding because the value of the dollar keeps increasing relative to goods, but is that really a bad thing when you wealth is worth more? One issue is that loans become a big problem as the value of money increases, making debts grow larger in real terms. These are all bad effects, but there are also positive aspects of deflation namely the prices of consumer goods fall, making it easier to purchase them. Amazon has caused deflation by lowering prices for goods through its expert supply chain management and willingness to have low margins. That’s a great result of deflation. The Fed is worried about cell phone service price declines in 2017. Does that sound like a problem? It sounds like a good thing.

Short term bouts of deflation could be surrounded by problematic events, but overall prices have remained stable during the times when deflation was common. It’s an oxymoron to say the Fed is in charge of price stability. Does the chart below show stable prices since the Fed was created?

It looks like the Fed has done the opposite of keeping prices stable by basically eliminating deflation. This chart supports the argument for holding hard assets like gold instead of fiat currency to store your wealth. Implicitly, you could say that because the Federal Reserve wants to increase asset prices for investors to experience the “wealth effect” it weirdly implies that the Fed wants you to buy gold, since that is one of the best inflation hedges that rises in price with an increase in inflation. If there was no Fed, the yellow metal would be more or less fairly valued by the market, as it would in theory circulate as money, and there would not be an outsized opportunity to make enormous gains in wealth as exists today.