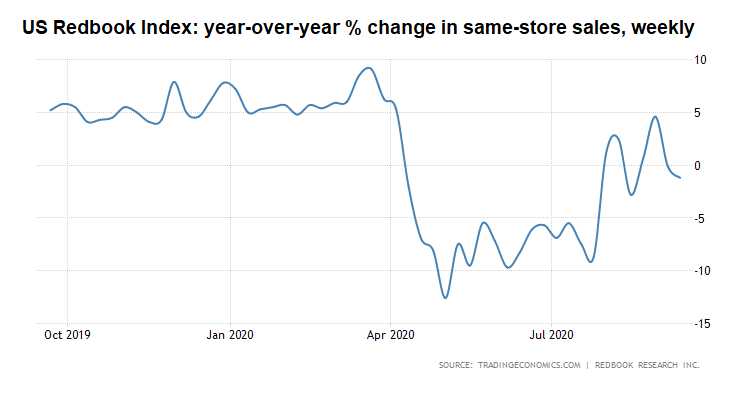 Redbook same store sales growth fell for the 2nd straight week in the week of September 12th. As you can see from the chart below, it fell from -0.1% to -1.2%. This might not be a blip lower. The good news is it’s occurring after the back to school shopping season. The $300 in weekly unemployment benefits could have boosted spending, but now that thesis is dubious. The details are convoluted. It probably won’t have a meaningfully positive impact on spending. The backup plan for the bulls should be to hope for better job creation catalyzed by the Abbott tests which should allow the leisure and hospitality industry to reopen fully.

There are good and bad aspects to the benefits because each state is facing unique challenges. On the one hand, about 6% of unemployed people don’t qualify for the extra money. That’s because they don’t meet the $100 weekly threshold to get benefits. This doesn’t matter in 9 states where they pay a minimum benefit of $100. On the positive side, as of September 10th, 21 states were paying the $300 out. The best news is workers who haven’t been getting benefits but qualify for them, will get paid back up to $1,800 which is 6 weeks of benefits. Florida is an exception where only 4 weeks of benefits will be paid out.

The worst news is the money is already running out. Texas, Tennessee, Iowa, and Montana said after paying 6 weeks of benefits, they are stopping the program. It might be confusing for someone to get an $1,800 check and then nothing else. It wasn’t the best decision to use $44 billion in FEMA disaster relief money for unemployment benefits. This was bad timing as hurricane Laura, hurricane Sally, and the wildfires created a need for disaster relief (which is what the program is intended to do).

We have updated data on credit card delinquencies and charge offs from the 8 top credit card lending firms. This includes firms such as Citigroup, JP Morgan Chase, and American Express. The August results were good as the average delinquency rate rose 9 basis points to 1.98%, which is still down 23 basis points from June. The average charge off rate fell 9 basis points to 3.46%; it’s down 26 basis points from June. There are loans in forbearance just like mortgages. It was very smart/necessary for the banks to delay payments for a few months. It allowed the economy to avoid disaster. The key will be for the economy to reopen via expanding testing from Abbott Labs. That could create a second partial V-shaped recovery like we saw in the first couple months after the recession ended.

As you can see from the chart below, 93% of manufacturing industries are in contraction.

Yearly growth rose from -6.9% to -6.6%. Manufacturing is 6.7% below its pre-COVID-19 output. There was weakness in autos in August. Mining fell 2.5% monthly due to the disruptions from hurricane Laura and the overall terrible market for energy. ExxonMobil stock was down 11 days in a row as of Tuesday. Utilities production fell 0.4% monthly.

After correctly foreboding a weak August manufacturing report, the September Empire Fed manufacturing report portends a snapback in the sector. The index rose from 3.7 to 17 which beat the highest estimate of 15 and the consensus for 6.5. The new orders index was up 8.8 to 7.1 and the shipments index was up 7.4 to 14.1. To be clear, each index is the net between those experiencing higher new orders/shipments minus those with lower new orders/shipments. The 6 month forward looking index was also up as it rose 6 points to 40.3. Within this, new orders and shipments rose 1.9 and 8.2 points to 39.1 and 39.

The 10% correction in the Nasdaq may have been the quickest ever (3 days), but it didn’t get rid of the speculation among retail traders. It just encouraged more buyers because the mantra is to buy the dip.

As you can see from the chart below, the net call value traded as a percentage of the market cap for the QQQ hit 138% which is a 12 year high.

Speculation wasn’t this high prior to the COVID-19 crisis. Look at how little options speculation there was in the 1990s. These derivatives bets by retail traders can catalyze quicker losses than we saw in the late 1990s tech bubble. This is like the 1990s tech bubble on steroids.

Snowflake’s IPO on Wednesday is emblematic of the speculation in tech as the stock has a 134 TTM sales multiple using the open price from $190 to $195. The intended price of $120 will value the company at $33 billion which is almost triple the $12.4 valuation it got in its private funding round earlier this year. The IPO range was raised from $75-$85 to $100-$110. It was then raised to $120 because demand was so high.

Redbook same store sales growth is dropping. The unemployment benefits given out are a mixed bag. They certainly won’t boost spending like the stimulus earlier this year combined with the $600 in weekly benefits. Credit card charge offs and delinquencies weren’t high in August. The August industrial production report wasn’t good, but the Empire Fed manufacturing index was great. QQQ call option buying signals the frenzy in tech is still here despite the correction earlier this month.