Can The Fed Be Any More Dovish? 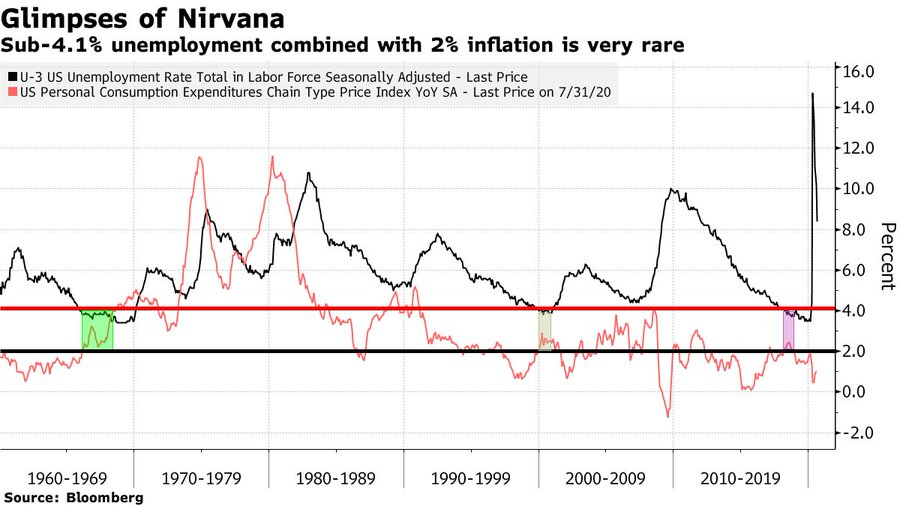 The Fed did exactly what most expected on Wednesday as it didn’t hike rates and called for no hikes through 2023 based on the median FOMC member’s estimate seen in the dot plot below. We think some commentators are extrapolating the stock market’s reaction onto the Fed. In practice this means people are biased to say the Fed was hawkish if stocks fall in reaction to the meeting even if the Fed wasn’t hawkish. If you’re going to take any positive statement on the economy and twist that into being a hawkish statement, the Fed can’t win. Obviously, the economy has improved since June when it last gave economic projections. No one seriously could have expected the Fed to lie about the economy by saying it’s not improving just to sound dovish.

Review Of The September Statement Changes

The Fed was about as dovish as it can be on rates when you consider that the median dot plot called for no hikes through 2023. The stock market’s reaction is an entirely different matter. The stock market had been euphoric for several weeks or even months, so a correction isn’t a shocker. You can say it’s bad news that even 0% rates for another 3 years couldn’t impress it. Stocks were so high, there were impossible expectations.

Let’s look at the changes to the statement. Firstly, the Fed said “Economic activity picked up” instead of saying it “picked up somewhat.” That means the improvement was stronger. That’s a basic fact no one can deny if they look at retail sales, the unemployment rate, or even industrial production which had a setback in August. Next the Fed said the health crisis will “continue to weigh on economic activity” instead of “weigh heavily” on it. This is factual as the economy has moved towards reopening in the past few weeks. There was a setback in July when hotspots caused cases to rise.

The most important part of the statement was when the Fed wrote, “the Committee will aim to achieve inflation moderately above 2 percent for some time so that inflation averages 2 percent over time and longer-term inflation expectations remain well anchored at 2 percent.” This extends Powell’s speech at Jackson Hole where he discussed the Fed letting inflation stay above 2%. That’s ironic because core PCE inflation isn’t near 2%. The Fed will allow something that’s not happening to happen. That’s like if someone says they won’t take profits in a stock if it rallies 20% when their position is underwater.

The September meeting was important because it was one the few each year that includes updated economic projections. As you can see from the table below, the Fed expects a smaller decline in 2020 GDP growth, but a smaller rebound in growth in 2021 and 2022 than in June. The smaller rebound could be because it will take less growth for the economy to recover since the damage in 2020 isn’t as bad as initially thought. Or the Fed could be extrapolating out the recent decline in the rate of improvement. GDP growth in 2020 and 2021 will largely depend on when the inflection point occurs where testing/a vaccine/better treatments allow the economy to get back to normal. Obviously, it’s possible that the virus comes back, causing growth to be worse in the future.

As you can see, the Fed drastically lowered its estimate for the average unemployment rate in 2020 from 9.3% to 7.6%. The Fed was too conservative in June just like it was in most of the last expansion. The Fed sees the unemployment rate falling to 4% in 2023, yet even still it doesn’t expect to raise rates that year. That’s amazingly dovish. That’s about as close to saying the Fed will never raise rates as you can get. Since the Fed sees the longer run employment rate at 4.1%, 4% unemployment is very close to if not at full employment. On the other hand, the Fed expects core PCE inflation to stay below 2% through 2022 and then only expects it to hit 2% in 2023. When looking at rates from that perspective, it’s no surprise the Fed doesn’t see any rate hikes in the next 3 years.

If the Fed needs to see the unemployment rate below 4.1% combined with 2% inflation, it might never raise rates. As you can see from the chart below, this combination has only occurred 3 times in the past 60 years.

This Was A Dovish Meeting Even Though Stocks Fell

Getting back to a point we made earlier this week, guidance is all about impacting markets today, not predicting policy. The Fed doesn’t care if its projections don’t come true. Neither does the market because it pushes the Fed to act in different ways when the economy shifts. You can say, the Fed is being dovish by not predicting high inflation through 2023; although, we haven’t had high inflation for years. If inflation doesn’t rise above 2% and stay there during this time frame, the Fed might say it won’t hike rates for another few years, which is obviously dovish.

The entirety of this meeting was dovish regardless of the stock market’s reaction. There wasn’t much more the Fed could have done to prove it won’t hike rates for many years. You can’t change what the Fed said after the fact just because stocks fell. It’s interesting that we questioned whether the Fed could get rid of some speculation in the stock market without hurting the economy prior to this meeting. The Fed accomplished that without actually doing anything. Obviously, it’s possible or even probable that the market was looking for an excuse to fall.

The Fed was very dovish as expected. It doesn’t see rate hikes for years to come. It mentioned how the economy is improving which is simply a restatement of facts. The Fed is fine with core PCE inflation rising above 2% to make up for the years it was below 2%. That’s quite the leap because inflation hasn’t been a problem for many years. The stock market fell after the meeting, but that doesn’t change what was said. Maybe the market had unrealistic expectations or fell for another reason. The big worry for the bulls is that endless low rates can’t keep the market up. Usually, it’s a sign of a top when a stock/market doesn’t go up on good news. It’ a bottom sign when they don’t fall on bad news.