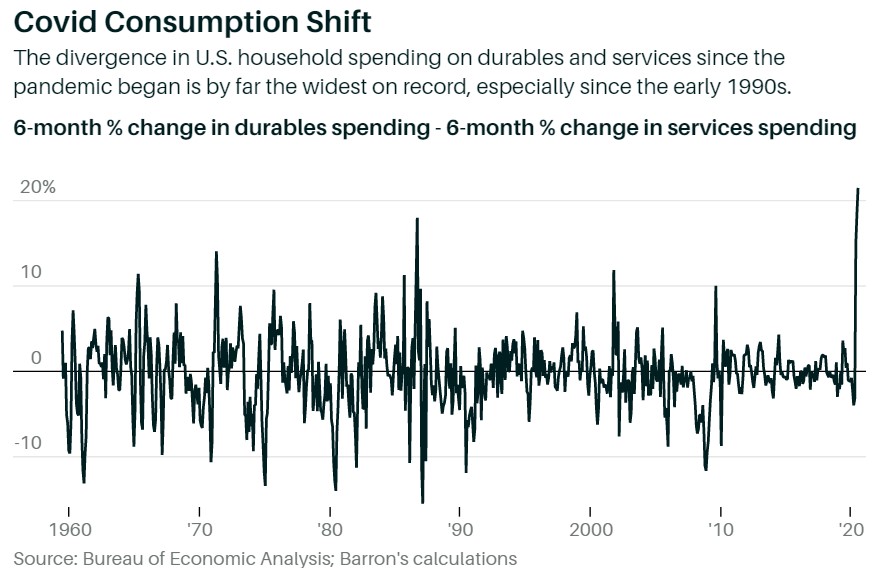 On Wednesday, the Fed will give us its decision on rates along with an updated look at its economic projections. It will be interesting to see where the Fed sees the unemployment rate going since it has fallen quickly, but the labor market is still very uncertain. We might see the Fed call for relatively low unemployment (mid single digits), while still projecting zero percent rates. Obviously, the Fed won’t hike rates on Wednesday.

As you can see from the chart below, Cornerstone Macro shows the Fed’s dot plot won’t even project rate hikes in 2023. That’s a good prediction by Cornerstone Macro because current guidance is the Fed’s best monetary policy tool. It has nothing to do with giving an honest guess at where rates will be in 2023. It’s not crazy to think the Fed will raise rates by then, but it would be crazy for the Fed to say it will raise rates then because that would be hawkish guidance. It would send the market into an unnecessary tailspin considering the fact that inflation is low. If inflation spikes in 2022 and we have full employment, the Fed can raise rates then. There’s no reason to say it would do that at this meeting though.

The Fed is willing to keep rates at zero even with inflation above 2%. There won’t be hikes or even guidance for hikes if inflation is below 2% like it is now. The Fed probably could try to talk down speculation in stocks, but it’s tough to get the market to listen without being hawkish which it won’t do.

COVID-19 caused the biggest shift in consumer spending ever. We had parts of the economy shut down and consumers flush with cash because of the stimulus. That was a temporary boon to some industries. As you can see from the chart below, the 6 month growth rate in durables spending minus the 6 month growth rate in services spending was the highest ever, going back to 1960. That’s a terrible shift because most people work in the service sector. The leisure and hospitality industry was decimated. On the other hand, there has been inflation in housekeeping supplies, appliances, and used cars & trucks due to the spike in demand.

The decimation of the leisure and hospitality industry can’t go on. The poor and the middle class can’t work from home. Specifically, 20.4% of people making between $35,000 and $49,999 per year were teleworking in late August. 71.2% of those making $200,000 and above teleworked. This disparity meant many poor and middle class people were essential workers in the heart of the pandemic in March and April. Now, with the worst of the pandemic over, they can’t get their jobs back. TSA throughput is down 67% from last year. The hope is the Abbott Labs tests that are supposed to go out this month allow people to start flying safely again.

Finally, In A Bull Market

It sounds silly to say, but there are still some fund managers who don’t think this is a bull market. That’s probably because the economy is still weak and the stock market is showing signs of euphoria. However, even if the stock market crashes, this counts as a bull market because the S&P 500 reached a new record high. Specifically, 58% of managers said this is a bull market and 29% said it’s a bear market rally. The faster the rally, the more stubborn some bears will become. The reality is a definition should be objective. That’s why we always stick with bull markets starting at new highs. This isn’t an opinion; it’s fact.

As you can see from the chart below, the tech sector was considered the most crowded trade by over 80% of fund managers. That makes it the most crowded trade of all time. Interesting, as of Monday, the Russell 1000 value outperformed the Russell 1000 growth index by the most in a month since March 2001 (over 5%). That was the first outperformance after an 11 month streak of growth beating value. It makes sense that tech was considered crowded because there were points in August where only big tech would rally. Gold’s selloff meant there was little competition in this category.

It’s funny how managers go long the crowded trades despite that being a contrarian indicator in itself. It’s impossible for most fund managers to be bearish on a crowded trade because then it wouldn’t be crowded. They might see this as a bubble, but they are still positioned to take advantage of the rally in tech, rather than buying the unloved banks.

As you can see from the chart below, the net percentage of managers saying tech is overvalued versus banks reached almost 100%. Everyone agrees tech is overvalued, but they invest anyway because the performance is good. Few think banks are overvalued, but they don’t want to buy weak stocks. They are ‘all in’ on the narrative of buying the best businesses with high moats and growth potential. Banks are too boring for these growth investors.

The chart below looks remarkably similar to the one above. Momentum (versus the all country world index), growth (versus value), and cyclicals (versus defensives) have gone parabolic. The bulls don’t realize they are still using recency bias if they use the past 7 years of returns to justify their positioning. In a structural change, the rules change. For example, rising rates would cause a structural change.

The Fed isn’t going to raise rates. It’s not even going to call for rate hikes in 2023 even though it’s possible they do raise rates by then. Hawkish guidance would cause a stock market crash since it’s so unexpected. Durables spending beat out services in the pandemic. This isn’t sustainable because many people work in the services sector and most middle class & poor people can’t telework. A few percentage points more fund managers see this as a bull market. They see tech as crowded and expensive. They see the banks as not expensive. The growth, momentum, and cyclical stocks have gone parabolic. Bulls use their recent performance to justify going long them which is faulty logic.