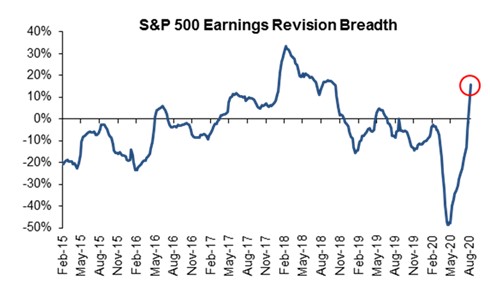 Everyone following the economy is studying how the lack of unemployment benefits will affect consumers. Only 11 states have been approved for $300 in weekly benefits (South Dakota declined assistance). Now it’s no longer okay for jobless claims to fall steadily. We need to see millions of people get their jobs back within the next couple of months or there will be a setback to this recovery. Congress isn’t near passing legislation.

If the Democrats win in the November election, the odds of an extension in boosted unemployment benefits passing early next year will increase. Unfortunately, either that won’t be necessary because the economy will have recovered by then, or the slowdown will have started in earnest, making it too late. Late this summer to early this fall is the window for a stimulus, not 8 months from now.

We will discuss differing data points on the economy from the 2nd week of August when the extra $600 in weekly unemployment benefits didn’t go out. You can look at the August data in two ways. You can either say if the economy is in good shape in August, it will only get better as more people get their jobs back or you can say of course August will be good because people still have left over savings from the benefits in July. In the latter theory, September would be worse than August even if the unemployment rate steadily falls.

Redbook same store sales growth improved from -3.4% to -2.8% in the week of August 15th. That’s still a decline, but it’s an improvement from the prior week and a great improvement from July. There is no evidence of the fall off in benefits impacting spending in this data point. There was hardly any difference in the preliminary consumer sentiment report in August compared to July. The sentiment index rose 0.3 to 72.8 as current conditions fell 0.3 to 82.5 and expectations rose 0.6 to 66.5. It’s surprising to see confidence hardly budge since COVID-19 cases crashed within the past 4 weeks. Maybe the decline in benefits canceled out the optimism. The 7 day average of COVID-19 cases fell from 69,328 on July 29th to 49,284 on August 18th. Since April, the 5 year consumer outlook has fallen 18 points and buying conditions rose 21 points because of low interest rates.

The chart above shows the 7 day average of job postings on Indeed as of the week of August 14th. As you can see, the yearly decline was 20.3% which was a bit worse than the 18.1% decline in the previous week. This week’s data was basically the same as last week, but last year had a big burst in job postings in August. That being said, this data is a little worse than the Redbook same store sales reading from the same week.

This Indeed survey is right in line with the expectation for no change in initial unemployment claims. If initial claims don’t fall, the narrative will shift towards a cyclical slowdown because of the decline in benefits. The only thing that can stop a slowdown besides a stimulus is a vaccine. There are 5 vaccines in phase 3 clinical trials (1 in America, 3 in China, and one in the U.K.) Unfortunately, we need to wait at least a few months longer for a successful vaccine to be administered. If any are successful, it would immediately help the economy because businesses would make investments in anticipation of a return to normalcy in 2021.

The chart below shows how comfortable consumers are with various activities. To be clear, comfort largely depends on vaccine data, meaning even the activities that people are the most uncertain about will shift towards comfort.

People are most comfortable about going back to work as 60% are willing to do so now or within a month. Stocks that do well when people go to work or shop at stores are probably doing better than vacation, concert, and movie companies. However, the companies on the right side of this chart will see their stocks jump the most on positive vaccine news. The momentum tech stocks would likely fall on that news.

Earnings Revisions Not Equaling A Rally

As you can see from the chart below, earnings revision breadth reversed course in May which is a strongly positive signal for stocks. Estimates went from cratering to moving higher. Q2 estimates got so low, a record percentage of firms beat them. That’s not typical in recessions. However, even in recessions more firms beat EPS estimates than miss them. Plus, the trend towards earnings beats is increasing. That’s why knowing a company will beat EPS estimates matters dramatically less for predicting stock performance than it has historically. If every company manages expectations well enough, they will all beat, but it will be meaningless as it is quickly becoming. That’s why revisions matter more than whether a company beats or misses estimates.

This was the 2nd quickest bear market recover since 1950. As you can see from the chart below, stocks have increased 68% of the time in the past 3 months. This is among the six best three month periods in the past 22 years. We are seeing late cycle speculation early in an economic recovery.

This is an interesting situation because you would argue that the earnings revisions are correctly driving stock performance if you just looked at the first two charts. The problem is the biggest reason for stocks rising is the major tech firms. As you can see from the chart below, 2021 earnings breadth for software firms is worse than the rest of the rest of the S&P 500. The firms that are seeing their stocks do the best are having worse than average revisions.

Economists are looking for a slowdown in August now that the extra federal unemployment benefits are largely gone. However, jobless claims have fallen and same store sales growth has improved. Indeed job postings have stagnated. Let’s see if initial claims this Thursday corroborate with that weakness. People are ready to go back to work, but not ready to gather in large numbers or go to the movies. Earnings breadth has improved. The stock market is doing really well, however, the hottest stocks are seeing weaker than average 2021 earnings revisions. The stock market leaders might not be able to keep the rally alive.