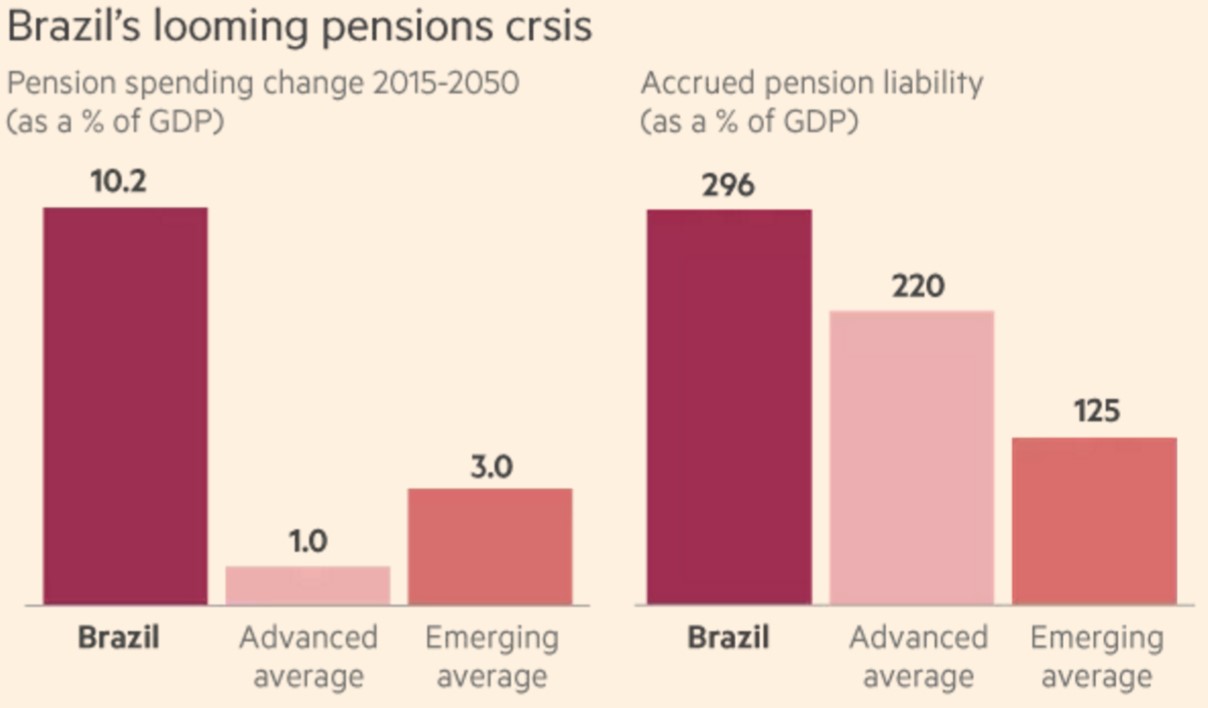 The Brazilian economy had been in rough shape as it had 8 straight quarters of declines. It was finally starting to look like Brazil would exit the worst recession in its history as job growth began to pick up in March and April, slightly easing the problem of having 14 million unemployed, and Q1 GDP growth was positive. Unfortunately, this recovery looks to be ending shortly because of the political chaos that is marring the country. Audio has been released of Michel Temer, the country’s president, possibly authorizing of hushmoney payments to an ally in jail. This is encouraging politicians from the left to call for his resignation. Temer now has an approval rating in the mid-single digits, but he’s refusing to step down even though there have been protests in the streets.

In reaction to Temer’s controversy, the Brazilian currency, known as the Real initially fell 7% versus the U.S. dollar which was the worst day since the financial crisis in 2008. Since Temer refused to step down following the scandal, the government has practically grinded to a halt as it prepares to vote on removing the second president in less than a year.

While there are many uncertainties, the one thing that is certain is that Temer’s pension reforms won’t be passed. Since reforms require political capital because it’s tough to cut anyone’s benefits, he won’t be able to get them done. If the opposition comes to power, the actions Temer took this year may be reversed.

As you can see from the chart below, the accrued pension liability as a percentage of GDP is significantly higher than that of the advanced economies even though Brazil is still an emerging economy. Brazil was once part of the ‘BRIC’ acronym which stood for the Brazil, Russia, India, and China. That acronym is clearly a thing of the past as most of those economies have struggled since the financial crisis in 2008.

Brazil’s pension system is too generous to the workers. This is a case of good intentions gone wrong. Women are allowed to retire after working 30 years and men are allowed to retire after 35 years. Retired government workers get the full pay raises that current workers get. The problem with pension systems which are too generous is that politicians enact them to get elected. They are a house of cards which cannot be mathematically solvent. However, by the time everyone realizes this, the original politician who put the system in place is long gone.

Instead of having workers retiring in their 50s without contributing enough to the pension system, Temer’s plan was to raise the minimum retirement age for men to 65 and 62 for women. The plan was working its way through Congress before this political scandal hit the news. Temer’s government spending cap was reliant on pension fund reforms. The government is in desperate need of spending cuts as its deficit has grown to 9.2% of GDP. 64% of public school teachers and university professor retire before 50. Brazilians spending more time retired than working makes the system insolvent.

This controversy is also affecting central bank policy. Although Ilan Goldfajn, the president of the central bank, said that political pressures won’t affect the central bank’s decision on interest rates, it looks like money flowing out of Brazil will prevent the bank from cutting rates as much as it planned. Cutting interest rates is one of the main policy tools central banks use to stimulate the economy as it encourages banks to lend out more capital. The economy runs on credit, so the more lending activity, the more business investment. Lower interest rates help the banks improve their net interest margins which is important in a weak economy. Originally, economists expected the Brazilian central bank to cut rates by 125 basis points, but now the market is expecting a smaller cut.

The Brazilian economy suffered its worst ever contraction. It was just about to exit the scandal occurred. While the knee jerk reaction in the currency market and the stock market was temporarily reversed in the weeks following the news, the long-term implications are more problematic than short term fluctuations in markets. The pension system not being reformed is a long-term headwind on economic growth. Money spent by the government today steals from future growth. It’s a similar problem America has except Brazil shouldn’t be facing it because it’s population is younger, meaning more workers are paying into the system. Brazil’s backwards fiscal policy is shooting itself in the foot.