Restrictions Are Back: Consumer Loses Steam 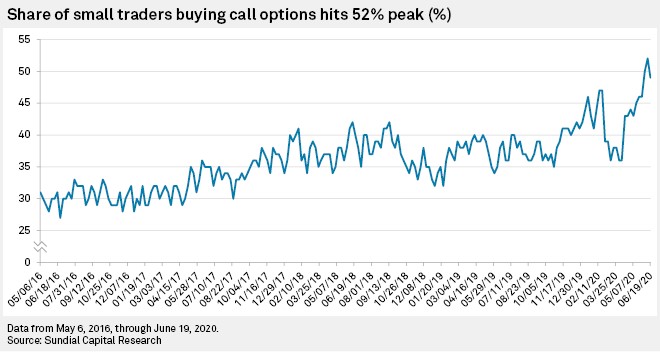 2020 has been one of the most unusual years in decades. In the midst of a global pandemic and a recession, there has been excessive speculation in the stock market, especially the Nasdaq. A typical argument against the stock market is that it’s only owned by rich people and doesn’t reflect the economy. While that argument has partial truths, the rally has been enthusiastically supported by small investors who are using free trading accounts. This is just like the 1990s. It’s shocking because there has been a mega trend towards index funds. Retail took the stimulus money and the extra money they didn’t spend because they couldn’t go out and used it to speculate in individual stocks and sometimes options which can be dangerous. It provided entertainment and an alternative form of betting.

As you can see from the S&P Global chart below, the share of small traders buying call options hit a peak of 52% in June near the market’s June 8th peak. It’s quite a large swing to go from index fund investing to speculating on options. This is a mental pitfall. People either like to take no risk or gamble. They don’t see the glorious opportunity to invest with controlled risk. Just going slightly up the risk curve off zero risk can provide solid returns without big potential losses.

If the government stimulus money goes into the stock market, it’s not helping the real economy. It’s like pushing on a string. The investments go up, but actual earnings are weak since the economy is weak because people aren’t spending money. The most important goal should be to take care of COVID-19, so people can go out and spend money.

COVID-19 Restrictions Are Coming Back

There were 61,067 new cases of COVID-19 on Thursday and 960 new deaths. The scary part is all these new cases are being discovered earlier which means there is a bigger gap between cases and deaths. That implies deaths could start increasing more sharply in late July. So far, we have seen a small uptick in the 7 day average of new deaths. It bottomed on July 5th at 516. It’s now at 625. States such as Arizona, Georgia, Florida, California, and Texas have done a terrible job at restricting the virus, so their economies will suffer. It’s better for the economy in the long run to get rid of the virus instead of ending restrictions too early.

As you can see from the chart below, the restrictions are coming back. Almost 80% of states are either on hold or increasing restrictions. This lines up with the economic weakness that started in the 2nd half of June and continued through early July.

The Consumer Is In Trouble

As you can see from the chart below, yearly growth in spending on the 30 million Chase cards has stopped increasing. The low negative double digits is not a good place to stop improving. According to JP Morgan, the modest growth decline has come from a widespread decline across states instead of a sharp decline in just the states most impacted by this latest spike in COVID-19 cases. There is a correlation between restaurant spending and subsequent case growth which means there should be restrictions on eating out in the hardest hit areas.

Despite the spike in the stock market, consumer comfort in the Bloomberg survey in the week of July 5th fell for the first time in 7 weeks. As you can see from the chart below, consumer comfort bottomed in May which was a 6 year low. The index fell 0.4 to 42.9. This is a modest decline, but it’s huge in terms of studying the trend. The economy is falling backwards. The only part of the economy that still looks strong is housing.

The measurement of the buying climate and sentiment in the south both hit 3 week lows. The personal finances index fell. The one good part of the survey was views on the economy reached a 3 month high. This increase was likely linked to the stock market. The stock market isn’t reflecting the economy. In fact, it’s a reverse indicator because the tech stocks are rallying when bad COVID-19 data comes out because it means people will shop online and work from home. Since software ate the world, what is good for the tech stocks is good for the overall market. The Nasdaq 100 in relation to the Wilshire 5,000 is about at the level it peaked at in March 2000 when the tech bubble ended. Furthermore, the Nasdaq 100 has outperformed the bank stocks by the most in the past 6 months since the financial crisis in early 2009 and the peak of the tech bubble in early 2000.

The JP Morgan data showed all states had weakness. The chart below jives with that.

Even though New York has dealt with the virus successfully, 26% fewer small businesses were open than last year which is actually worse than Florida and Texas which had 18.1% and 18.8% fewer open. The weakness in small businesses works in tune with the decline in small cap stocks. Most stocks are significantly off their June 8th high which was the peak in optimism on the prospect of the virus going away. The indexes are being papered over by the biggest internet names. The Nasdaq 100 has outperformed the S&P 500 by 0.98% for 5 weeks in a row which is the longest streak since November 1999 which was right before the tech bubble burst.

It’s not good for the economy if stimulus money is put in the stock market instead of used for spending. This is helping to create asset bubbles instead of economic improvement. Retail investors went from focusing on index funds to buying call options on cyclical stocks. Retail traders bet on a recovery, but didn’t spend more money to drive the recovery. The economy is falling backwards because of the spike in COVID-19 cases in the south and the west. There is now widespread economic weakness. Small businesses are being closed in New York, Florida, and Texas at a greater rate.