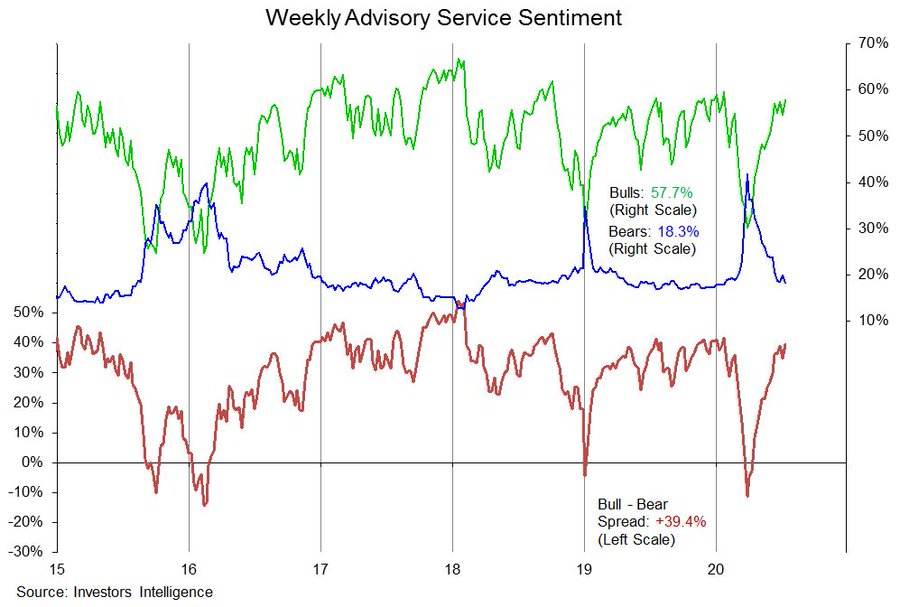 The labor market could be in trouble. It might be weakening which shouldn’t be surprising because over 1/3rd of the economy is facing an economic contraction due to COVID-19 coming back into the forefront. Weakness is devastating when you start at double digit unemployment; plus, the extra $600 in weekly federal unemployment benefits will run out on July 25th. It’s unlikely this negative turn is priced into the stock market unless you think cloud and EV tech stocks should rally no matter what the news shows. These stocks are being viewed as safety stocks. The reality is there is safety in value; high price to sales ratios normally aren’t good values. Valuation depends on growth, but almost across the board, valuations levels are above their recent averages.

As you can see from the chart above, the civilian unemployment household pulse survey showed 5.6 million jobs added from the reference week in May to the reference week in June. Remember, monthly BLS surveys don’t measure the whole month. They only measure data from one week. The household pulse survey shows a 1.3 million decline in employment in the past 2 weeks.

2 weeks from that reading is the July survey week. Unless the data turns around, this signals there will be job losses in July. We knew July would create fewer jobs because there are fewer people left to come back to work, but markets weren’t pricing in job losses when they were being bid up following the previous two labor reports. This report could shock the market. However, the market usually prices data in ahead of time, so we might see selloffs on weak jobless claims reports if they materialize.

Unfortunately, America has failed miserably in containing the virus if you look at its performance compared to the rest of the world. Arguably, America has done the worst job at containing it. About 1-2 months ago, there was a theory that the states that didn’t deal with severe impacts from the virus had successfully fended it off and that there would never be shutdowns again.

This was proven wrong as the virus is worse than ever in terms of cases. Hospitalizations have been spiking for a few weeks and now deaths are starting to increase. There were 43,004 new hospitalizations on Wednesday which was the highest since May 14th. On July 8th, there were 61,848 new cases which was a record high. Texas, Florida, and California, had 10,199; 9,989; and 8,561 new cases. There were 993 deaths on Tuesday and 890 on Wednesday. The 3 day moving average’s peak rose for the first time since April. As you can see from the chart below, this was the worst week over week increase in the 7 day moving average of new deaths since May 5th.

You could argue the stock market is looking forward to improvements, but the reality is this 2nd wave has mostly been ignored as the S&P 500 is near its June 8th high. There is complacency as investors think whatever weakness there is will be temporary. Plus, the cloud stocks are seen as beneficiaries of a shutdown or less human to human contact. Since software ate the world, they control the market. On Wednesday, Microsoft, Apple, and Amazon alone accounted for half of the 0.79% rally in the S&P 500. This was only the 2nd time the index increased at least 0.75% in a day and fewer than 300 stocks rallied. These big internet stocks have dramatically outperformed the market this year and in the past few years. The concentration in the big tech names is only increasing.

As you can see from the chart below, the Nasdaq’s 20 day rate of change has outperformed that of the S&P 500 by the most since late 2002 other than earlier this year. This is late cycle speculative action occurring in what is potentially the beginning of an expansion. If the economy falls back, this period will either be a double dip recession or one long recession with a short period of improvement in the middle.

The AAII sentiment indexes dramatically oppose each other. Supposedly, retail investors are more bearish than average and advisors are very bullish. It’s weird to see individuals bearish in the midst of one of the greatest speculative rampages by retail brokerage accounts. Maybe these speculators are new investors that aren’t in the AAII poll. Specifically, the individual investor survey showed there were 5% more bulls than last week. However, that only got it up to 27.2% which is 10.8% below average. The share of bears fell 3.2% to 42.7% which is 12.2% above average.

As you can see from the chart below, advisors are very bullish which makes sense because the market has done well. There are 57.7% bulls and 18.3% bears. That’s the most optimism since January. The bull to bear spread is 39.4%.

The Chinese stock market is in a bubble. The Shanghai Composite index is up 8 days in a row in which it has increased 16.5%. The Chinese IPO QuantumCTek rose 876% in its first day of trading which is the most an IPO ever rose in one day. As you can see from the chart below, 72% of CSI 300 stocks have 14 day RSIs above 70 (which means overbought). That’s the highest since 2009 which means it outpaces the 2015 stock market bubble.

The economy might lose jobs in July as it is weakening due to the massive spike in COVID-19 cases in the south and west. Deaths are starting to increase which is a very bad sign. The Nasdaq is outperforming the S&P 500 which is amazing because the S&P 500 has been doing well as it has been dragged higher by the major internet names. The retail AAII survey shows investors are bearish; the advisory survey shows they are bullish which makes more sense. The Chinese stock market is in a bubble as it has increased 8 days in a row and is extremely overbought.