The Labor Market Has Stagnated For Past Month 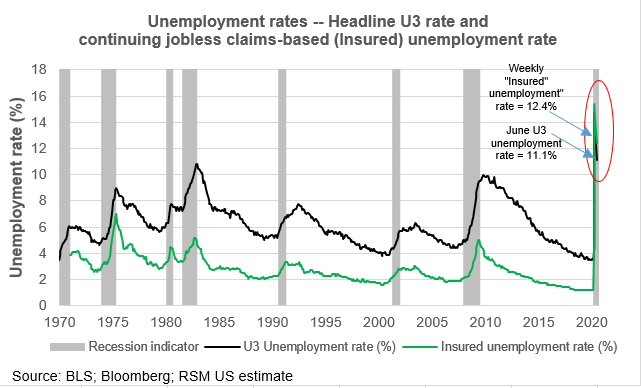 Headline initial jobless claims fell solidly which was better than expected, but total claims, when you include PUAs, barely improved. The labor market has stagnated for the past 4 weeks. Specifically, in the week of July 4th, initial claims fell from 1.413 million to 1.314 million which beat estimates for 1.375 million. That’s a 7% decline which is solid especially since the prior week’s reading was revised lower from 1.427 million. This decline was the largest since June 6th on a percentage basis.

In the week of June 27th, continued claims fell from 18.76 million to 18.062 million which is a 3.7% decline. That’s the biggest decline in 2 weeks. The initial claims reading 2 weeks from now will be the BLS survey week. PUA initial claims rose 42,000 to 1.04 million. As you can see from the chart below, there were 2.4 million PUA plus initial claims. That was a 3% decline. As we mentioned, the labor market has stagnated in the past 4 weeks. This total is slightly higher than it was a month ago. Having no improvement is quite bad when the unemployment rate is in the low double digits which is above the peak in the last cycle.

As the chart below shows, the all in implied insured unemployment rate is 12.4% which is above June’s rate of 11.1%, but only slightly above the misclassified rate of 12.1%. In July’s report, the misclassified rate and the headline rate should fully converge. If that happens and the labor market hardly improves like the jobless claims data suggests, the U3 rate could actually increase slightly. In a previous article, we mentioned that if the July labor report is likely to be weak, the stock market will probably already price that in ahead of time. We aren’t discussing data that isn’t widely known. If next week’s initial claims reading is bad, the unemployment report should follow suit.

Whether the recent economic weakness has been priced into markets depends on how you think it should be priced in. There is always a new narrative on Wall Street that aims to explain the recent action in markets. It’s important to not get caught up in narratives because when the market changes its tune, the narrative will lag. Don’t look for those promoting the previous narrative to save you from losses. They will already be onto a new explanation.

The current explanation as to why the S&P 500 is near its record high is market composition. The software stocks have gotten so large as a percentage of the index, when the tech sector does well, the entire market does well. Because the software & online retailers are seen as benefiting from the shutdowns and changes in behavior due to COVID-19, the virus spreading is being viewed as good news by the index.

As you can see from the bottom chart above, growth has outperformed value for over a decade and the recent outperformance has gone vertical. What that largely means is software stocks have trounced the banks. The top chart shows the ratio of technology to financial stocks has hit a record high. This is a play on low interest rates as well. One potential flaw in the narrative supporting many story stocks is that electric vehicle stocks are rallying. In theory, if less people have to drive to work, less cars would be needed. To be fair, electric car sales have gained market share during the slowdown. Therefore, you can argue any industry that’s doing well is being treated as if these accelerations will continue indefinitely whenever negative COVID-19 data is released.

The overarching theme here is the market is pricing in COVID-19 being bad. That can be seen in small cap value stocks which are down 13.6% since June 8th. It’s clear June 8th was the peak in excitement about a potential cyclical recovery. The S&P 500 is a quality growth index which means the way it prices in this negative news is by rallying. This is an explanation rather than support for how the market has acted. The narrative can change on a dime, or positive COVID-19 news can send these story stocks lower.

Democrats Could Win The Senate

Large changes, with our current focus being on a potential corporate tax increase, mostly occur when the Congress and presidency are controlled by one party. The Democrats’ weakest link in winning all 3 is thought to be the Senate. If the Dems win the Senate, a tax hike could be coming. As you can see from the PredictIt data below, there is a 61% chance the Senate goes to the Dems. If the Dems win the Presidency, they win the Senate if it’s a tie (the VP is the deciding voter). The presidential election, which is the top of the ticket, has a large impact on the Senate and House races, but only 1/3rd of Senators are up for re-election. It doesn’t seem like the stock market has priced a tax hike in since it is near its record high.

Plus, the Democrats could cause more havoc for the big internet companies through antitrust rulings. Since the internet companies have a huge impact on the market, this is critical. We will be watching the July 27th (12PM ET) hearing in which the CEOs of Apple, Amazon, Facebook, and Google (Alphabet) testify in front of Congress over its investigation into online platforms and market power. This could be a preview of what is to come for these major online players.

Initial jobless claims fell 7% in the first week of July, but the all in reading was still problematic. There are 2.4 million claims when you include PUAs. All in claims lead to an unemployment rate of 12.4%. The stock market has been rallying on the bad COVID-19 news because it is seen as good for software and online retailers which dominate the S&P 500. The betting market is starting to think the Dems will win the Senate which would mean corporate taxes are going to be raised which is bad for stocks.