Rate Hike In December Would Be Unprecedented 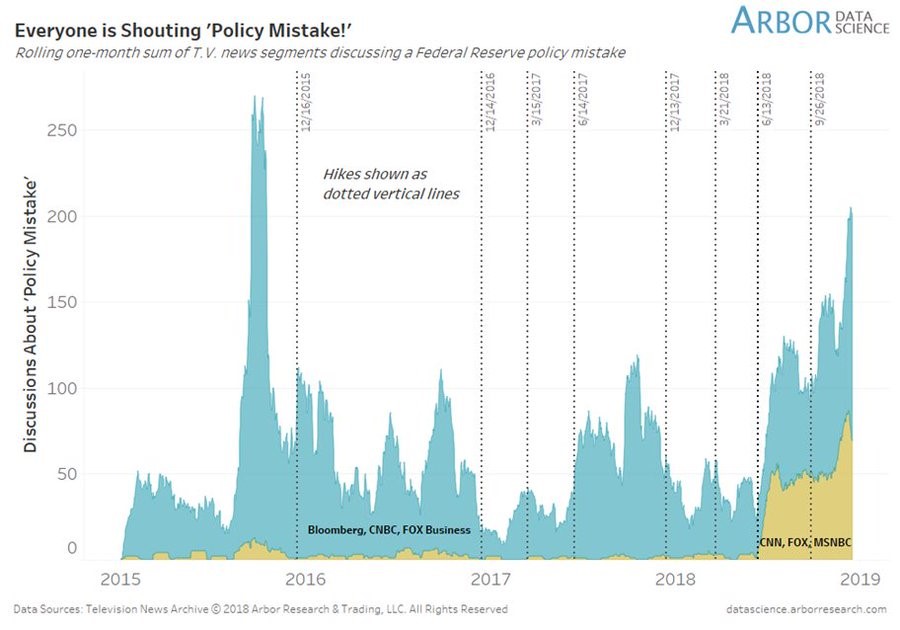 This article will get you prepared for the Wednesday December 19th Fed meeting which could be the most important one in years. This meeting is important because economic growth is slowing while the Fed is hiking rates. The Fed had zero percent rates during the weakness in 2011-2012 caused by the European debt crisis. During the late 2015 to early 2016 economic weakness the Fed hiked rates for the first time. This time is different as the Fed is approaching the neutral rate, has hiked rates 3 times this year already, and economic growth is slowing. A hawkish Fed paired with an economic slowdown can lead to a recession.

Because the cycle is almost over, each hike could be the last one of the cycle. If the Fed doesn’t hike in December, some will question if the hikes are over. If it does hike and there is dovish rhetoric, there will also be questions if hiking is over. This hike would put the Fed funds rate at the low end of the estimate range for the neutral rate. The big question about the end of Fed rate hikes is if a recession is coming.

Even though many assume that there will be a recession after hikes end there have been instances where rate hikes were paused and then restarted a few years later. The Fed hiked rates in 1994-1995, but there wasn’t a recession until 2001. Modest cuts occurred until 1999 followed by rate hikes which ultimately led to a recession. The key with timing cycles is to avoid falling into the trap where investors assume this cycle will be just like the last one or just like the average. Investors do this because they want to be in control of the situation and remain calm. However, the calmness doesn’t stay if the cycle is unusual like many are.

The final reasons this Fed meeting is going to be extremely important are the recent equity volatility and the flattening of the yield curve. According to a report by Anna Cieslak and Annette Vissing-Jorgensen which is called “The Economics of the Fed Put”:

The chart below is from that report. 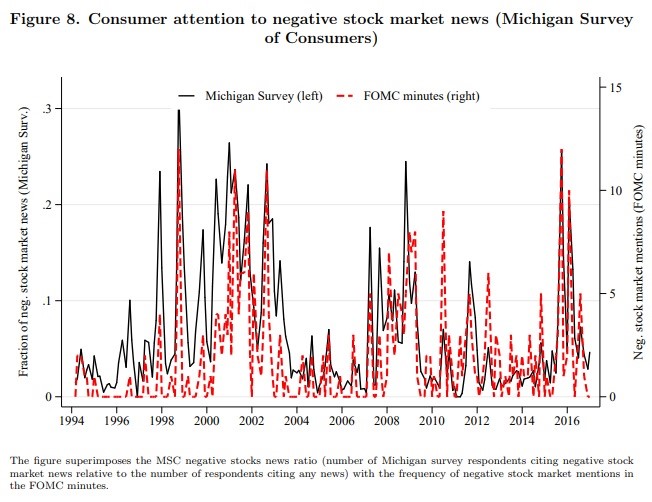 Source: The Economics Of The Fed Put

The stock market matters a lot to the Fed. It is debatable if it should matter because the Fed doesn’t have a mandate to keep stocks up. However, that’s irrelevant to this analysis because we can’t control the Fed’s decision, we can only react to its policy.  This report explains why stocks do so well on Fed days. In a separate study done by Bloomberg, the backdrop of the S&P 500 being down in the past 3 months, 6 months, and 1 year, has only accompanied 2 of the 76 rate hikes since 1980. That applies in this meeting because stocks are down in all 3 scenarios.

The Fed would be going against the norm by hiking. It has been guiding for this hike for months, but the recent volatility has caused investors to second guess the possibility. The Fed could decide to wait until January to hike to let the market calm down, but then it might kick the can down the road again if stocks fall further.

Will There Be A Hike?

The two big decisions for the Fed are whether it will hike and what its guidance for hikes in 2019 will be. As you can see from the chart below, there is a 74% chance the Fed will hike rates on Wednesday. 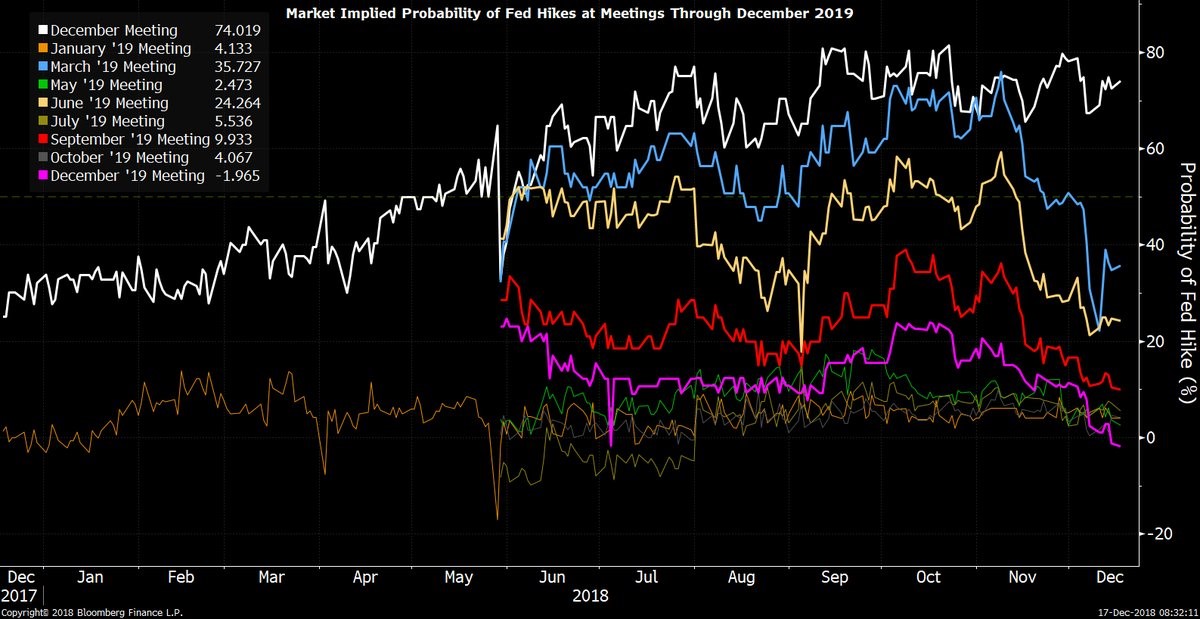 When the percentage is above 70%, the Fed usually goes with the market. It seems like a 20 basis point hike could occur, even with the latest stock market volatility, because of prior Fed guidance. However, the market’s opinion is vastly different from the September Fed guidance on 2019 hikes. The Fed funds futures market doesn’t expect any hikes in 2019 even though the Fed previously guided for 3.

The Fed will probably reduce its 2019 hike guidance, but the big question is by how much. It will be interesting to see how markets react if the Fed guides for 2 hikes. It would be less than the September guidance, but more than the market expects.

If the Fed hikes 3 times in 2019 after a December hike, the Fed funds rate will be higher than the current 10 year bond yield. The difference between the 10 year yield and the 2 year yield is only 16 basis points. A hawkish hike (with suggestion of further hikes) will likely invert the yield curve. As you can see from the chart below, the T.V. news’ discussions of a policy mistake negatively correlates with the yield curve. 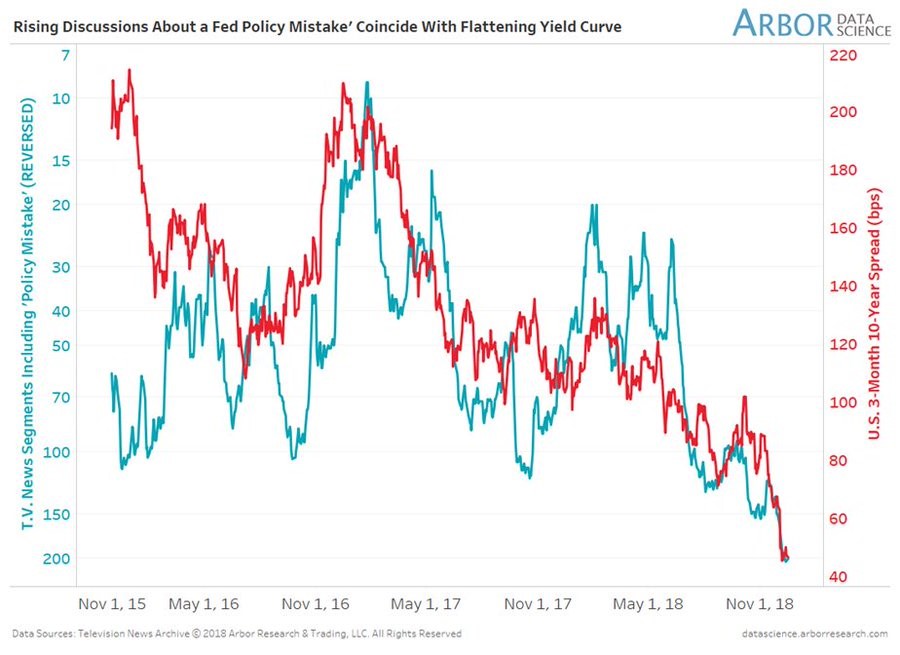 Inverting the curve isn’t always a mistake as rate hikes aim to lower inflation. However, if the Fed wants the cycle average of core inflation to be 2%, it doesn’t need to hike rates in December.

One problem with expecting the Fed to make the easy decision, which is to lower 2019 hike guidance and possibly not even hike rates in 2019, is Powell has claimed the relationship between the Fed funds rate and the neutral rate is more important than the yield curve. If the Fed hikes and promises 3 hikes in 2019, the curve will likely invert. That would be an unforced error. As you can see from the chart below, the news media falsely claimed the late 2015 hike was a mistake because it was the first one and growth was slowing. The big differences now is that rates are much higher and the curve is much flatter. 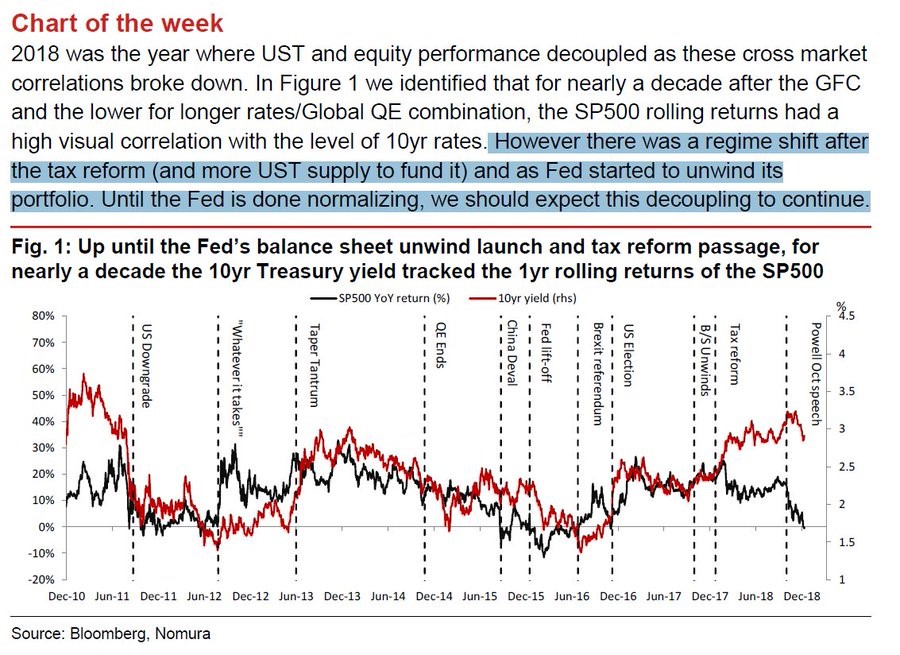 This is a pivotal Fed funds meeting because the yield curve is close to inverting and the stock market has been very volatile. It would be interesting to see the Fed stand up to the market because the economy isn’t near a recession. However, there is little to gain from that because inflation isn’t a huge issue. Here is a previous article where we discussed the magic number for the Fed to become more dovish.