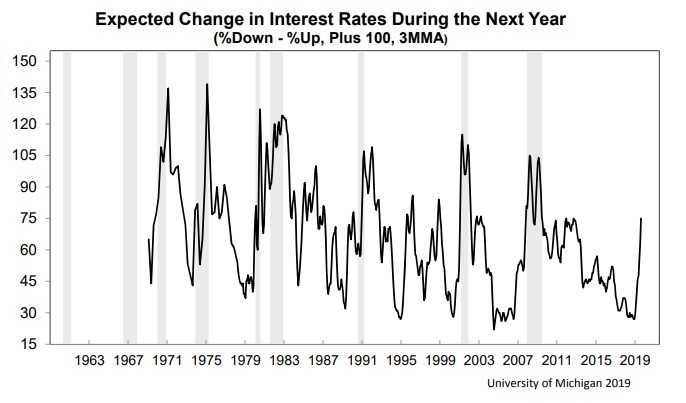 The most obvious answer to the question of how to figure out the consensus is to look at the price action. The market isn’t always correct about the future, but here we’re just trying to figure out what people think. This is a weighted average vote on the future in that the more money an investor puts up, the more votes he/she gets. The vote is dependent on how much money and conviction each investor has. While price tells you a lot, it doesn’t tell you everything. It doesn’t tell you what investors are thinking. That’s where following the narrative comes into play.

How To Figure Out The Consensus

One example of a narrative is ‘hold your nose and buy.’ That shows lack of conviction. It’s good to see a lack of euphoria, but if the fundaments are truly as bad as investors think, the market will come crashing down. The best way to understand the consensus is to research all the narratives on social media and the mainstream press and then match the price action to the popular narrative. The goal here isn’t to actually follow what people are doing. It just tells you what you are trading against.

One of the narratives during the August correction was that the yield curve inversion means a recession is coming. As you can see from the chart below, the most recession stories were run in the press since 2011.

Regardless of whether there will be a recession, this number of stories might hurt consumer sentiment. That’s something to watch out for.

The preliminary August University of Michigan survey showed sentiment fell. The overall index fell 6.4% monthly. The current and expectations indexes fell 3% and 9.1%. Consumers are worried about the tariffs and the Fed’s interest rate cut. In the final reading we might see worries about the yield curve inversion as it went mainstream. Specifically, 33% of consumers spontaneously mentioned tariffs which was slightly below the recent peak of 37%. More consumers see interest rates falling as the chart below shows.

Spikes in expected rate cuts have historically occurred before recessions. The Fed is trying to prevent a recession by cutting rates, but it could backfire, if rate cuts scare consumers.

While we have been discussing the impact the manufacturing sector has on the U.S. economy, the flash Markit services PMI fell significantly making the debate less crucial. The graphs below are still interesting.

Manufacturing output has fallen as a percentage of nominal GDP in the past few decades. Also, the manufacturing and non-manufacturing sectors have become less correlated. That wasn’t the case in the August flash reading as they both fell.

Many investors are focused on the flash manufacturing Markit PMI which showed the sector fell to contractionary territory and is at a 119 month low. The flash manufacturing PMI fell 0.5 to 49.9. However, that misses the elephant in the room which is the weak service sector. We already knew manufacturing was contracting as it was reported in the July industrial production report. The bigger story is the decline in the flash services PMI which fell 2.1 points to 50.9. That’s only a 3 month low, but it had a bigger sequential negative impact on the composite. The flash composite fell from 52.6 to 50.9 which is also a 3 month low. This reading is consistent with 1.5% GDP growth. That’s not quite a recession, but it’s more weakness.

Everywhere you look at in this report, there is weakness. New business growth was the weakest ever (dating back to October 2009). Job creation was the weakest since February 2010. 1 year business confidence fell for the 7th straight month and hit a record low (since July 2012). Prices paid fell for the first time since at least October 2009 and prices received fell for the first time in 3.5 years. Service sector business expectations were the worst in at least almost 10 years. New work fell the most since March 2016. Manufacturing was also weak. New business and export sales fell the most in 10 years as firms blamed the weak global economy and the auto industry.

Just like in the US, Europe has seen more weakness in manufacturing than services. As you can see from the chart below, as of July, the service sector PMI was 6.2 points above the manufacturing sector.

Versus services, manufacturing was the worst since the financial crisis. This differential is driven by weakness from China and global trade tensions. The August Markit flash reading was a turnaround for both sectors as the flash composite rose from 51.5 to 51.8 to a 2 month high. Europe now has a higher PMI than America. The PMIs converged as the service sector PMI was up 0.2 to 53.4 and the manufacturing PMI was up 0.9 to 47.8 which is still in contraction territory.

Since Powell just gave his Jackson Hole speech on the future of monetary policy, let’s look at the changes to the FOMC voters in 2020. As you can see, the two members who voted against the July rate cut, George and Rosengren, won’t be voting next year.

Instead, the most dovish member (according to chart) on the Fed, Neel Kashkari, will get a vote. His outspokenness on Twitter will gain more importance as he will be able to shape policy in just 4 short months. On the other hand, the doves Evans and Bullard, will lose their vote and the hawk, Mester, will gain a vote.

The consensus started to fear a recession because of the yield curve inversion in August. Consumer sentiment fell in the preliminary August reading. The inversion might make the final reading even worse. The flash U.S. Markit PMI wasn’t good mostly because of the sequential decline in the service sector. The composite still stayed above 50 which implies 1.5% Q3 GDP growth. The European PMI actually improved. We reviewed the changes to the voting members of the Fed in 2020. Neel Kashkari will get a vote next year.