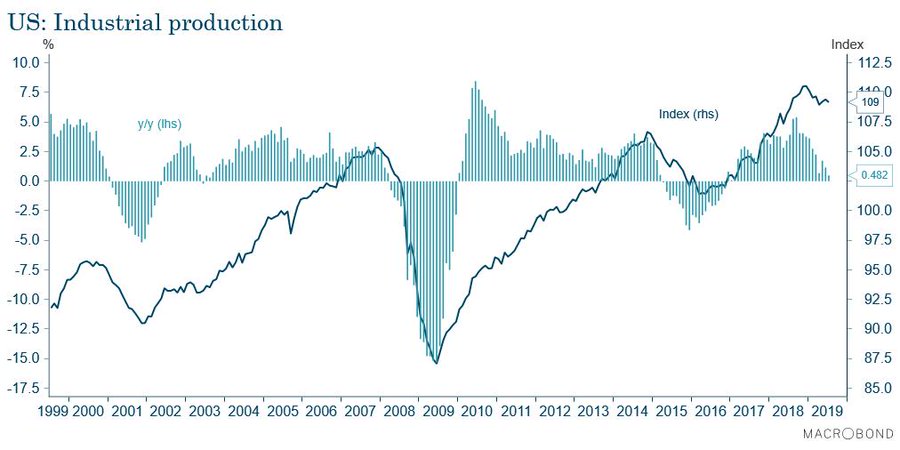 Based on the Thursday’s hard data reports, it looks like the manufacturing sector is heading into a recession, while the consumer is doing well. In an economy driven by consumer spending, that’s a recipe for a modest economic slowdown, unlike 2008, perhaps closer to 2015. To be clear, this isn’t a certainty especially since the latest consumer sentiment report was weak because of the trade tensions.

Economic Setup: How Important Is Manufacturing?

On the positive side, the trade war and economic slowdown have caused interest rates to fall which will provide a positive catalyst for the housing market which hasn’t been doing well since 2018. Real residential investment growth has hurt GDP growth for 6 straight quarters. A rebound in housing and solid consumption growth brought about by positive real wage growth can prevent manufacturing weakness from causing an economic recession.

Manufacturing has shrunk as a percentage of the labor market because of automation. This explains why the economy can avoid a recession even if manufacturing does poorly. Industrial production growth might not get as weak in this recession because oil prices haven’t recently cratered as they did prior to 2015-16. Therefore, there won’t be a huge decline in mining output. The industrial production weakness in 2015 and 2016 didn’t cause an economic recession. However, let’s look at a counter point as to why manufacturing matters.

As you can see from the chart above, the manufacturing sector’s percentage of total private sector real value added is in the low double digits. It’s higher than tech, professional, scientific, and tech services, and healthcare. Manufacturing still matters to the economy; it just doesn’t matter as much to the labor market. This provides a defense to why we review it at all. It’s also notable that the cyclical nature of manufacturing means it leads services. It also provides false recession calls such as in 2015-2016.

Relative to the rest to the world, American industrial production isn’t doing terribly, but its growth rate is still headed in the wrong direction. For example, China only had 4.8% industrial production growth in July. While that’s faster than America’s growth, it’s terrible in relative terms as it was the weakest growth rate since February 2002. America’s growth is only the weakest since February 2017. Germany is also doing poorly. As you can see from the chart below, its yearly growth rate was -5.2% which missed estimates for -3.1% and was the weakest reading since the financial crisis. American growth was still positive.

With the situation contextualized, let’s look at the details of this mediocre report which is terrible in rate of change terms. Monthly industrial production growth was -0.2% in July which missed estimates for 0.1%. At least June’s reading was revised higher by 2 tenths to 0.2%. As you can see from the chart below, yearly growth was 0.5% in July.

Considering the relatively tough comparison, this isn’t that bad of a reading. July 2018’s growth was 3.9% which was near the recent mini-cycle’s peak. The next 2 months will have harder comparisons as their growth rates were 5.3% and 5.4%. September 2018’s growth rate was the highest since December 2010. Therefore, it wouldn’t be shocking to see negative yearly growth in the next 2 months.

Manufacturing followed a very solid monthly reading of 0.6% growth in June with a poor reading of -0.4% in July which missed estimates by 3 tenths. It’s yearly growth of -0.5% in July was just above April’s reading. This negative yearly growth is why we’ve referred to this being the start of a manufacturing recession. Similar to industrial production, this segment has tough comps coming up. Yearly growth was 3.3% and 3.5% in August and September of last year. September’s growth was the strongest since August 2012. Yearly growth was 2.6% in July 2018, implying growth can easily stay negative in the next 2 months.

Details Of The Report

Utilities boosted monthly growth which isn’t a good sign for the cyclical economy. Utilities are more affected by the weather than cyclical changes. Monthly utilities production growth was 3.1% following a -3.3% June reading. Yearly growth went from being a drag to being in line with overall industrial production growth as it improved from -2.8% to 0.3%.

Monthly construction supplies production fell 1% and motor vehicle production fell 0.2%. Motor vehicle sales have been range bound for years, but watch out for elevated auto loan delinquencies signaling underlying weakness. Monthly mining output was also weak as it fell 1.8%. As we mentioned, mining was hurt by the oil crash in the last manufacturing recession. Current yearly growth is 5.5%. It bottomed at -12.4% in April 2016. That was actually worse growth than the 2007-09 recession. Finally, the overall industrial production capacity to utilization rate fell from 77.8% to 77.5% which was below the consensus of 77.8%. This stat isn’t that useful at this point in the cycle because capacity is nowhere near full utilization.

Cass Information Systems states this index is “signaling an economic contraction” and that there is “a growing risk GDP will go negative by the end of the year.” The current median estimate for Q3 GDP growth is 2%.

Fund managers agree with Cass Information Systems’ assessment except this survey is on a global scale. As you can see from the chart below, the net percentage of fund managers who see a global recession coming in the next year is the highest in 8 years.

To be clear, there doesn’t need to be negative global GDP growth for there to be a recession. Negative global growth is rare. Since 1961, it only went negative on a full year basis once. Growth was negative in 2009 which is why the percentage in this survey went positive for the only time in this 13 year period.