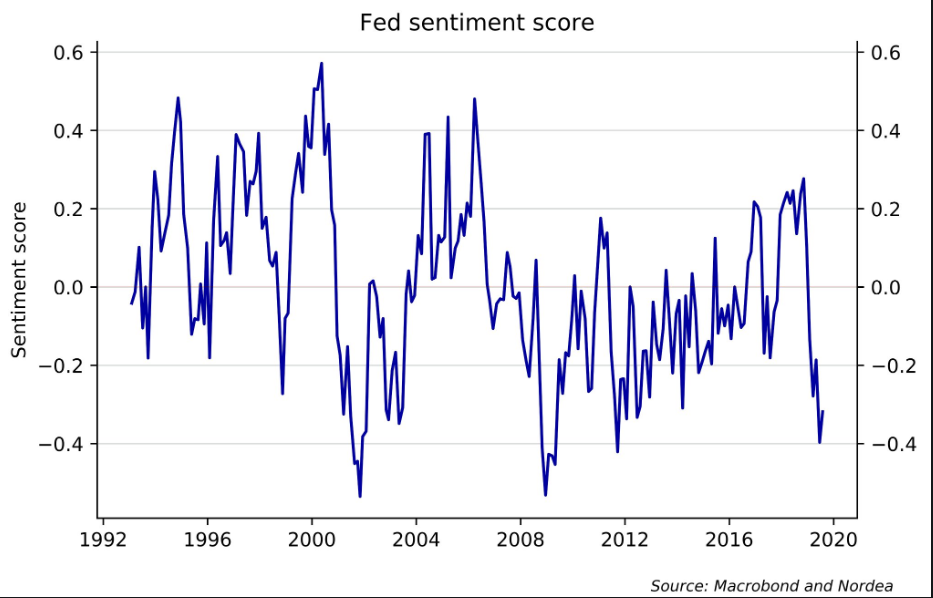 On Friday, the Fed was upstaged by President Trump’s tariff tweets, but monetary policy still matters despite what the market says in the short run. Before we get into what Powell stated on Friday, it’s notable that the Fed funds futures market has moved towards expecting fewer rate cuts this year. It had been impressive that stocks were doing well while the market was pricing in fewer cuts, but that changed once the tariffs caused the S&P 500 to fall 2.59% on Friday.

Keep in mind, any time rate cuts are expected, it’s dovish. Expecting fewer cuts is just slightly less dovish. Specifically, the odds for three or more cuts this year went from 60.6% on August 16th to just 25.9% on Friday (now 38.6%). The most likely scenario is one cut in September and then one cut in either October or December.

Now let’s get into what Powell said in his speech. He stated, the American economy is in good shape, but faces “significant risks.” Powell wants to have his cake and eat it to. That means he wants to have it both ways. He wants the market to know that the Fed will act if tariffs hurt the economy. However, he doesn’t want to scare consumers and businesses into thinking the economy is in trouble. This is like if a firefighter showed up to your house and started shooting water at your house all the while trying to convince you there isn’t a fire. It’s not working for Powell because in the University of Michigan consumer sentiment report, consumers showed they were more cautious because of the July rate cut. If that makes them worried, two more cuts this year will make them even more concerned.

Powell Discusses Global Risks, Some Of Which Abated

Powell reiterated what the Fed has been saying for a few months. They think the US economy is fine, but the weak global economy and tariffs are risk factors that can bring the American economy down. Specifically, Powell stated, “We have seen further evidence of a global slowdown, notably in Germany and China. Geopolitical events have been much in the news, including the growing possibility of a hard Brexit, rising tensions in Hong Kong, and the dissolution of the Italian government.” It was humorous to hear Powell state that the events since the last Fed meeting “have been eventful.”

The flash composite PMI increased from 50.9 to 51.4 which was a 2 month high. It was driven by manufacturing which had its PMI increase from 43.2 to 43.6. Its services PMI fell from 54.5 to 54.4. Since the American composite flash PMI fell from 52.6 to 50.9, Germany is now looking stronger than America. Obviously, the German industrial production decline of 5.1% in July shows weakness (America’s rose 0.5%). This PMI is simply something to consider.

The Hong Kong protests have continued for 12 straight weekends. As most things in politics, the Hong Kong protests are also being fueled by economic discontent. Hong Kong’s housing is unaffordable and its fertility rate has dropped below the level necessary to keep the population stable. As you can see from the chart below, Hong Kong is by far the most unaffordable city with at least 1 million people in the world.

China announced an additional $75 billion worth of tariffs on American soybeans, oil, and autos on Friday. The chart below shows the value of each American export targeted by China’s new round of tariffs.

China is putting another 5% tax on American soybean and oil imports beginning in September. China will resume its 25% additional tariff on American cars on December 15th. There is another 10% tax on some cars. With general duties included, the total tax on U.S. cars can reach 50%.

The stock market fell sharply on Friday following Trump’s response to China’s new tariff. Starting on October 1st, the $250 billion in goods taxed will be taxed at a 30% rate instead of a 25% rate. That will hit manufacturing firms. The $300 billion in goods that were going to be taxed starting on September 1st at a 10% rate will now be taxed at a 15% rate. This will hurt consumers even more than before.

In a previous article we mentioned how low interest rates would eventually help new home sales. It turns out, they already did, we just didn’t know it yet. That’s because the June new home sales report was revised up substantially, putting it at a new cycle high. Some were worried if a recession was coming because the previous peak was back in November 2017. That worry is gone as the June reading was revised from 646,000 to 728,000. Obviously, take this reading with a grain of salt because it can be revised again. However, it’s better to see a strong revision than a strong initial reading since it’s subject to one less revision.

As you can see from the chart below, in July new home sales fell to 635,000 which missed estimates by 10,000. The revision was larger than the miss, so we will call this a net win.

The market is extremely headline driven right now as we have trade war news every day and the Fed trying to react to it. It seems like few care about actual economic news like the new home sales report because markets are reacting to the geopolitical headlines. The housing market still matters. With such improvement in June new home sales, the real residential investment growth component in Q2 could turn positive. More importantly, the new record eliminates the indicator’s call for a recession. Housing might have momentum heading into 2020 partially because of low rates.