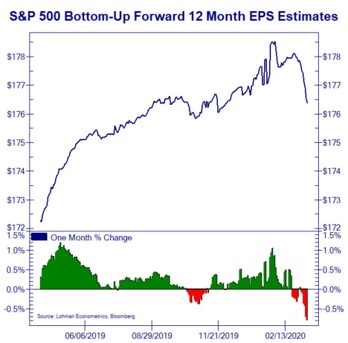 Let’s start with what is driving the economy and markets: COVID-19. We suggest you visit https://www.worldometers.info/coronavirus/ to find the latest updates on the number of cases and deaths from the new coronavirus because whatever we write here will be stale quickly. As you can see from the chart below, America is following Italy’s path. That’s bad news because Italy has been ravaged by this virus especially in the north.

As we have mentioned, this virus is much different and probably worse than the 2008 financial crisis because of its human element. As the situation gets worse in America, investors and traders will see first hand the tragedy that is occurring. That might make it hard to find a sustainable bottom in these markets. We know that the market always prices in the future, however, it is always damaged by significant negative short term events such as recessions because of the uncertainty of how prolonged the impact of these events will be. When both supply and demand stop, it creates an unprecedented circumstance.

Markets rallied on Friday afternoon because it appeared the government is taking the situation more seriously by promising 1.5 million tests in a week and 5 million tests in a month. However, it’s still very early in the game when it comes to the coronavirus. There’s obviously only a certain amount stocks can fall. They won’t fall 10% every day. However, who will be buying before it’s clear the situation is improving?

We disagree with those saying now that we are in a bear market, there are different rules. There aren’t new rules because stocks fell an arbitrary amount. There are new rules because we are dealing with a global pandemic. It’s a black swan event. This situation isn’t even about markets but about human lives.

The preliminary March consumer sentiment report from the University of Michigan was actually good. That’s because from the first half of the month, especially in the beginning of it, the situation wasn’t as bleak as it has become. However, consumer’s outlook worsened considerably which we will get to. As you can see from the chart below, the sentiment index fell from 101 to 95.9. This beat estimates for 95. We’ve heard some say that we need to wait until analysts get too negative, where estimates can be beaten, before you can go bullish. However, this wasn’t even close to how bad sentiment will get. As you can see, it’s way higher than it was in the early 2010s.

It was said that consumers weren’t as negative as you’d expect because they regarded COVID-19 as a temporary event. They weren’t as nervous as they were in 2007 (the runup to the financial crisis). This tells us that consumers will rebound quickly from this economic shock if there isn’t a big hit to the labor market (big if depending on how long this crisis lasts). If they think it is temporary, they are prepared for it to end. On the negative side, retail sales are still going to go down significantly even if consumers are confident. They won’t be buying motor vehicles which is the biggest component of retail sales.

The current conditions index fell from 114.8 to 112.5 which is basically no change. The expectations index fell from 92.1 to 85.3 which is a bigger drop, but not dramatic. We expect a bigger drop in the final reading which comes out on March 27th. As we mentioned, consumers are getting worried about the future. The part of the sentiment index that involves judgements about the prospects for the economy fell 29 points which represented 83% of the index’s decline. Consumers were more optimistic about the next 5 years than the next year. That’s because they think COVID-19 won’t last 5 years. This was the reverse in February’s report because the economy was at a cyclical high point.

Because of the import & export price index, the PPI, and CPI reports, the NY Fed’s Q1 GDP Nowcast was lowered from 1.71% to 1.59%. That’s nothing compared to what is to come. Growth might go negative. It will be interesting to watch the Nowcasts digest the terrible data that’s coming in the next few weeks. The usually bullish, St. Louis Fed Nowcast shows 2.05% growth.

As you can see from the chart below, JP Morgan’s Nowcast of global capex expects there to be a massive decline in capex in Q1. This is recessionary data.

We are in an unusual moment where the recession has just started, but almost everyone already agrees we are in one. Usually, the accurate macro forecasters use the leading edge of data to predict the odds of a potential recession. We love macro, but this time is different. You don’t need the data to tell you a recession is here; just read the COVID-19 related news.

Q1 will be a horrible for 2020 earnings estimates because guidance will be terrible. The worst possible guidance is when it includes a lot of uncertainty. Last quarter, we saw some firms increase the range of expectations, but that’s nothing compared to what will occur when firms start reporting next month.

As you can see from the chart above, NTM (next 12 months) S&P 500 estimates went from $178.5 recently to $176.5. That’s only the beginning of the decline that’s coming. 0% earnings growth probably shouldn’t be the base case anymore. It should be the bull case. EPS will fall modestly in Q1, but that’s just the beginning of the weakness because the U.S. economy was strong in January and February. As of March 13th, the consensus for Q1 EPS growth was -2.07%. That’s down from -0.55% on March 1st. In that period, the consensus for Q2 growth fell from 3.48% to 0.61%. Those estimates have very far to fall. Q3 growth is expected to be 5.32%. Even if growth reaches that level it might not make up for the weakness in the first half of the year.

The US is following Italy in terms of the number of COVID-19 cases which is a very bad sign. This will push the economy into a recession. The preliminary March consumer sentiment report was better than expected, but even it quantified the negative expectations for the economy in the next year. Global capex will collapse and this will be an earnings recession. Expecting 0% S&P 500 EPS growth is way too bullish. This is an unusual period because most of the time when economic data is soft in the beginning stages of a recession, people disagree about if it is a recession. Now, almost everyone senses the economy will be in a recession in 2020.