Unprecedented Decline: How Bad Will It Get? 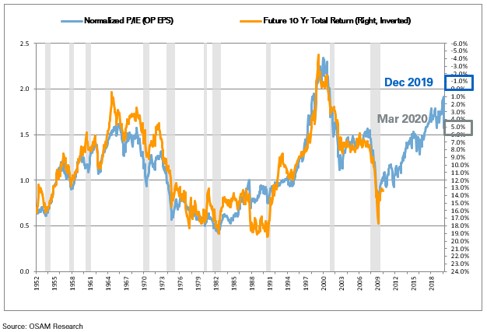 Let’s start this article with some of the craziest stats from March 12th’s plunge. This decline will go down in market history because it was the 5th biggest since 1926. The S&P 500 fell 9.51%. There were 3 worse declines in 1929 and one in 1987 where stocks fell 20.47%. Currently the limit to a daily decline is 20%, so beating that would be impossible; trading would be ended due to the circuit breaker. The 2nd craziest stat is in the first 4 days of the week, the S&P 500 fell 16.5%. That would be the 4th worst quarterly decline in the past 40 years. We had a terrible quarter cramped into 4 days. Markets are trading fast. You are seeing a year’s worth of moves in a couple weeks.

With all this selling, is it the time to buy? The chart above suggests the market is near its bottom. This chart shows a volatility adjusted oscillator since 2000. The market hit one of the 4 most oversold levels since February 2000 on Thursday. Of the 3 other times it was this low, 2 readings nailed the bottom and one was close.

Recessions: How Bad Will It Get?

The U.S. economy is very likely to go into a recession in 2020. You don’t need to be an economist to know that a wholesale economic shutdown isn’t good for growth. The recent great economic data doesn’t matter. January and February were great, but the 2nd half of March is about to be terrible. The average bear market in a recession causes stocks to fall 37%. The table below lists how all the recessions since 1929 impacted GDP and the stock market. The 2001 recession was unusual because it was extremely tiny, yet stocks fell 49.1% because of the tech bubble.

If you ask us how bad the shutdown’s impact to the economy will be, we will respond by asking you how long the shutdown will be. No one knows when COVID-19 will be contained or when there will be a cure. No one even knows if the summer heat will limit its spread. The only thing we know is the economy has had a wholescale shutdown in the past few days. Those actions aren’t taken because governments and businesses think this will go away in a few days. Anything is possible, but that’s not likely and therefore shouldn’t be the base case assumption.

Renaissance Macro provides us with great research on the topic of how bad a shutdown will be for the economy. In short, it’s terrible. If half the U.S. economy is shut down for 2 weeks it implies a 7.5% annualized decline in GDP. A one month decline leads to a 12.5% annualized drop.

Unlike 2008, this is a human crisis that has become a financial crisis. 2008 was a financial crisis that became a human crisis. If the government didn’t get policy right in 2008, we could have been left with a broken financial system. Now, if the government doesn’t get policy right, lives could be at risk. In that case, 2020 is way worse even if the stock market doesn’t fall as much as it did from 2007 to 2009.

COVID-19 doesn’t care about the PE multiple of the S&P 500. When investors sell because they have no liquidity, they aren’t doing so because they think valuations are high. That being said, considering how dire the situation has gotten, the selling earlier in this correction makes a lot of sense. The market didn’t get this wrong even though this has been a panic.

After the crisis ends, investors will care about valuations. As you can see from the chart below, the S&P 500’s forward PE ratio went from 18.9 to 13.9 which means it went from the cycle peak to the trough in December 2018 when stocks were cheap enough to inspire a year long rally (primarily multiple expansion). The problem is investors don’t know what earnings will be. They are very likely to be down on the year. However, you shouldn’t value stocks based on just one year. If that was the case, a stock that loses money should be worthless.

OSAM Research used the normalized price to integrated equity ratio to plot historic returns. As you can see, it predicts 10 year returns well. At the peak, it predicted about 1% returns per year for the next 10. As of March 10th, it predicted 5% returns per year because stocks were cheaper. The decline since then probably means we could see annualized returns in the 6% to 7% range.

In the week celebrating the 11th anniversary of the bull market, stocks went out with a bang as they had the biggest crash since 1987. Liquidity dried up and stocks priced in a recession. While it’s easy to say this decline has gone too far, if there is a recession, it really hasn’t. However, long term investors shouldn’t buy stocks based just on next year’s earnings. It makes sense to even buy stocks when the PE ratio gets high if you think that earnings are bottoming (which is not the case now). The illustration of the PE ratio doesn’t include the coming weakness in earnings. When that occurs, stocks will look expensive, but at that point it might make sense to buy them.