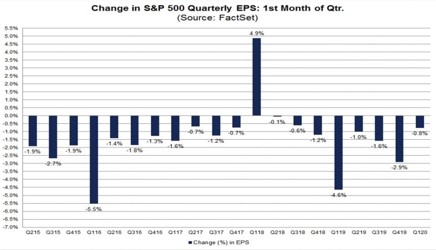 The difference between the ISM PMI and the Markit PMI fell to 1 as the former spiked and the latter fell slightly. Specifically, the Markit PMI fell from 52.4 to 51.9 in January which was 0.2 above the flash reading. Output growth was moderate and unchanged from December. New orders growth was soft and fell to the weakest level in 3 months. The size of the workforce increased barely, but hiring growth was the slowest in 4 months. Backlogs fell for the first time since September.

The one positive in this report was the 1 year outlook hit a 7 month high. Input costs were up the 2nd highest amount since April even though commodities prices have fallen. Specifically, the Bloomberg commodity total return index is down 9.42% year to date. Output prices were up fractionally as price growth was the lowest in 3 months. Finally, purchasing activity growth fell. This report seems worse than the ISM PMI because of the sequential weakness even though it was 1 point higher. The Chief Business Economist at Markit stated, “US manufacturing limped into 2020, with falling exports dampening output growth and causing a pull-back in hiring… Weakness looks broad-based.”

The PMI is in the 34th percentile since 1950. Historically, the lower the ISM PMI, the better the stock performance. When it gets above 50, there are worse future returns. When it gets above 60, returns are very low (still positive). While that’s what historically happens, the implication of low PMIs is that they will rebound. We can’t just have weak PMIs indefinitely and expect excess returns. Use common sense in that case even though buying when the PMI is low and selling when it’s high might not be common sense.

This PMI is consistent with 2.4% GDP growth. That’s below the Atlanta Fed’s estimate of 2.9%. Keep in mind, that Nowcast used the ISM PMI as a key indicator since not much data has been released. The NY Fed expects just 1.55% growth. This was the first PMI above 50 since July. Four of the top 6 big industries expanded which was up from 2. Within the report, the new orders index was up 4.4 points to 52. The production index was up an amazing 9.5 points to 54.3. As you can see in the chart above, that 11.1% increase was the 2nd biggest since 2000. Employment rose 1.4 to 46.6, but remember the manufacturing sector doesn’t employ many workers (compared to service). Inventories fell 0.4 to 48.8 and the backlog index rose 2.4 to 45.7.

The chart below measures the order surplus by subtracting inventories from the sum of backlogs and new orders. The order surplus increased nicely. The prices index was up 1.6 to 53.3 even though copper has fallen 13 straight days. Some of the recent decline in commodities prices is out of the sample period of this survey.

Even though Phase 1 of the trade deal with China passed, 2 firms still complained about tariffs in the comments section of the ISM report. A computer and electronic parts firm stated, “Tariffs are still a concern and are believed to be a factor in short supply and higher prices of electronic parts. Our profit margin has been somewhat negatively affected by high tariffs, particularly on electronic parts from China.”

Q4 Earnings Season Has Been Good

Investors may have reached a state of euphoria in January, but the rally correctly predicted the solid Q4 earnings season. Specifically, in the University of Michigan consumer sentiment index the percentage of consumers expecting stock to increase rose to 65.6% which was the 2nd highest reading in 20 years. The highest ever was 66.7% in January 2018. The good news is the AAII investor sentiment survey showed the percentage of bears was higher than the percentage of bulls after a 15 week streak of bulls leading bears.

The chart below shows the data differently as it’s from FactSet, but it also shows this quarter has been solid. In the first month of Q1, EPS estimates have fallen 0.8%. That’s the smallest decline since Q3 2018.

The manufacturing sector is probably turning around which works perfectly with the market’s thesis that economic growth will turnaround in 2020. Q4 earnings season has been much better than last quarter in terms of its effect on future estimates. While we will see an earnings turnaround and a stronger manufacturing sector in 2020, that far from guarantees future returns will be great. For example, if Bernie Sanders is elected president, no one will care about 2020 earnings or the 2020 manufacturing sector. The stock market will be pricing in the election risk in the next few months because it’s still not clear who will win the Dem primary and who will be elected president.