Just An Insurance Rate Cut Or Something More? 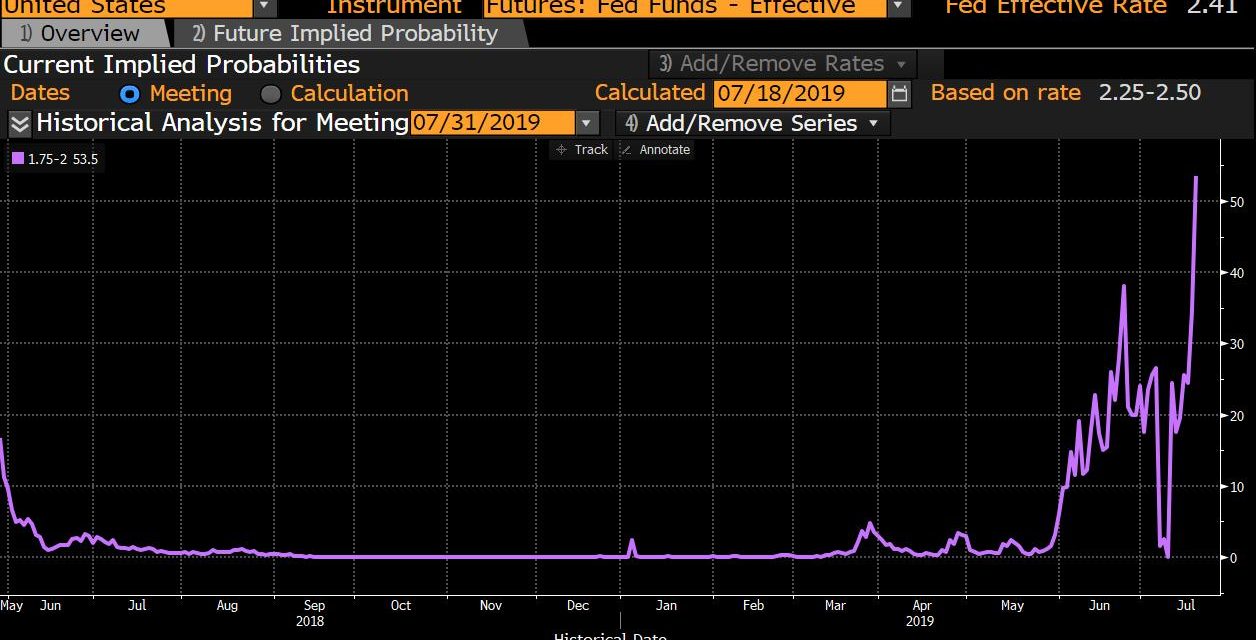 The Beige Book was consistent with what we have heard from the Fed in the past few weeks, namely economic growth is modest, but the Fed is still cutting rates this month because of crosscurrents which are the trade war and global economic slowdown. Since US reports aren’t affecting policy, we can’t expect the great June retail sales report to turn the Fed hawkish. These are insurance cuts until we see jobless claims rising and consumption growth falling.

The Fed stated, “labor markets remained tight, with contacts across the country experiencing difficulties filling open positions.” The Fed is in the catbird’s seat in the sense that inflation isn’t running hot and the labor market is in good shape. The Beige Book went on to say, “The outlook generally was positive for the coming months, with expectations of continued modest growth, despite widespread concerns about the possible negative impact of trade-related uncertainty.” Usually, the Fed doesn’t cut rates when the economy is generally positive. We don’t buy the argument that the Fed is cutting rates because it knows the economy is weak and just isn’t telling us. The Fed is very open and the data supports their assessment.

The Beige Book stated a Dallas Fed survey of 360 firms showed 28% of firms stated they were negatively affected by recent tariffs, and 5% were helped by them. It’s worth considering that firms might be overreacting to tariffs since growth is modest even though some of the business sentiment readings have fallen sharply. As you can see from the chart below, the IFR Beige Book Diffusion index fell from -39.5 to -44.

Based on the decline in the Fed’s usage of strong and strength among other changes, the Fed is deemed to be very dovish. This supports the notion that the Fed will cut rates 50 basis points in July.

A Double Cut In Play

The latest update shows there is a 64.8% chance. According to Jim Bianco, anytime the odds are above 33%, the move is in play. When the odds are above 50%, it is priced in. The market will be disappointed if the Fed cut rates once if these are the odds on the day of the meeting.

There have been 3 housing reports in the past few of days. The first was the July NAHB housing market index. In increased slightly from 64 to 65. It hasn’t fully recovered from the big decline late last year, but it’s 1 point away from its 2019 high (May). The current, futures sales, and traffic indexes all increased 1 point to 72, 71, and 48. Traffic is signaling weakness like it has for a lot of this cycle. The West was up 6 points to 75 as it was the strongest. It is the least affordable market. The South was up 1 point to 69. It is the biggest housing market. The Northeast is the smallest market and was at 57. The Midwest is the most affordable and it was 54.

In the week of July 12th, the MBA composite index was down 1.1% weekly after falling 2.4%. The purchase index fell 4% after rising 2%. However, yearly growth was a strong 7%. Refinance activity was up 2% after falling 7%. The average 30 year fixed mortgage rate is 3.81% which is 8 basis points above its recent low in June.

June housing starts and permits missed estimates. Starts have been weak this entire cycle. As you can see from the chart above, the peak in permits this cycle is below the past 5 cycle peaks. Specifically, starts fell from 1.265 million to 1.253 million which missed estimates for 1.26 million. Permits missed by a mile as they fell from 1.299 million to 1.22 million which missed the consensus of 1.3 million and the lowest estimate which was 1.251 million. This is the lowest number of permits since May 2017 as they fell 6.6% yearly. Multi-family permits fell 10.2% yearly and single family permits fell 4.7%. Single family starts fell 0.8% yearly and multi-family starts were up 24.5%. Even with the miss in starts, real residential investment growth should end its 5 quarter negative streak in Q2.

Foreign investment in US homes is falling, leaning on an already weak housing market. The dollar volume of homes bought by foreign investors from April 2018 to March 2019 fell 36% from the prior year. The decline is being catalyzed by weakness from China which is still the largest buyer, but saw its purchases fall 56% to $13.4 billion. This is due to politics, tariffs, the weak economy, and the U.S. government’s tougher stance on visa processing.

We’re in an unusual situation because stocks are flying high while managers are bearish. If this chart holds through, stocks will rally.

CSX lowered its guidance from expecting 1% to 2% revenue growth this year to a 1% decline. That, along with a miss on the top and bottom line, sent its stock down 10.27% on Wednesday which was its worst day since December 1st, 2008. CSX is a transportation company, so it is seen as a bellwether for the economy. The CEO stated, “Both global and U.S. economic conditions have been unusual this year, to say the least, and have impacted our volumes. You see it every week in our reported carloads. The present economic backdrop is one of the most puzzling I have experienced in my career.”

The situation isn’t puzzling. There is a surplus of trucks and demand is waning. Investors following the Cass Freight index seen in the chart below could have seen this coming. In June, yearly shipments fell 5.3% and expenditures were up 0.9%. Shipments growth improved from -6% in May, but monthly growth in June was -3.8%.

The Fed is still dovish. In fact, it might cut rates by 50 basis points in late-July. The permits reading was terrible, but real residential investment growth in Q2 will still probably be positive. Q2 GDP growth is expected to be 1.8%. Investors are very bearish on the outlook for earnings growth which is usually a good sign for stocks. CSX lowered its guidance and the Cass Freight index was weak again in June. Those are bad signs for the economy.